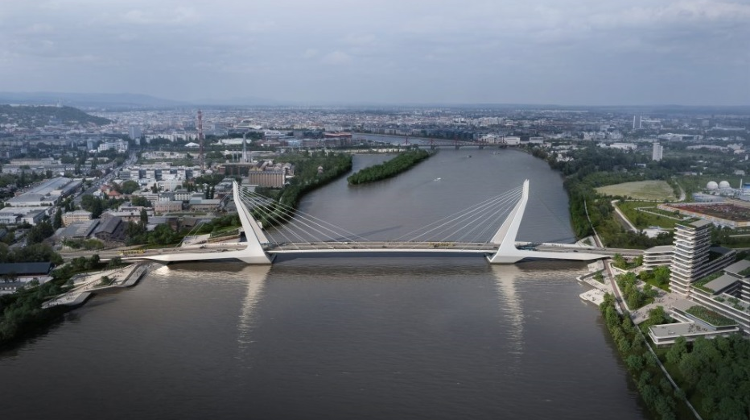 Index.hu announces the final results of the international architectural design competition launched in Hungary to select the best plan for a new bridge constructed over the Danube that fits into the image of Budapest and significantly reduces traffic congestion in the capital.

The overall winner became the unparalleled project of the English-Dutch UNStudio and the Buro Happold Engineering consultancy who, among others, have also designed the Erasmus Bridge of Rotterdam.

In the following, you can get to know more information about their project and see how the new bridge will look like in the future.

An international architectural design competition was announced in 2017 within the framework of which the Municipal Government of Budapest wished to choose the company responsible for the future construction of the New Danube Bridge in the southern part of Budapest.

The need for such a bridge in the southern, less-developed part of the capital has been long justified and thanks to the competition, the long-cherished project can eventually come true with the assistance of the winner UNStudio and the Buro Happold Engineering consultancy.

The overall winner project involves the construction of a new 2×3-laned bridge over the Danube connecting Galvani Street and Illatos Road where a tramway also gets a place, reports Newdanubebridge.com.

Furthermore, its design will make it “unique and elegant, and at the same time dynamic and powerful.”

Besides the absolute winner, some further outstanding plans should also be mentioned.

At 2nd place, there are two projects: the more conservative, two-pylon suspension bridge designed by the Lavigne & Chéron Architectes, the Bureau d’Études Greisch, the Közlekedés Consulting Engineers and the Geovil companies and the less conservative one built on large pillars over the Danube made by the Leonhardt, Andra und Partner, Zaha Hadid Architects, the WENER Consult and the Smoltzcyk & Partner consultancies.

István Tarlós, Mayor of Budapest, stated that the new bridge can improve traffic conditions and reduce the congestion on central bridges and in Üllői Street.

Consequently, when choosing the overall winner plan, the jury composed of experts considered such aspects as efficiency, innovation and cost optimization.

Around 600,000 people use the central bridges of the capital every day, but the estimated vehicle capacity of the downtown streets and roads can also contribute to traffic congestion.

As the Mayor further claimed, there are not enough crossing points in the northern and southern parts of Budapest and there is actually a great need for one between Csepel and Újbuda.

Therefore, the new bridge with great vehicle capacity and road network can be a fundamental crossing point in Budapest in the near future.

Balázs Fürjes, Government Commissioner, stated that according to previous estimations, the new bridge is going to be constructed between 2028 and 2033, but necessary measures have been already taken with the launch of the competition and the evaluation of the submitted projects.

Furthermore, he also added that the idea of the Galvani Bridge was already born in 1985, but several years have passed by until 2014 when the government started the preparation for the launch of the competition.

According to the initial plans, the construction of the bridge should have been finished by 2024 when the Olympic Games are going to take place, which had significance until the Hungarian Olympic Committee wished to host it.

However, even if we withdrew from hosting the Games, the bridge is going to be constructed which can greatly contribute to the development of the southern part of the capital and reduce traffic congestion in the city center.