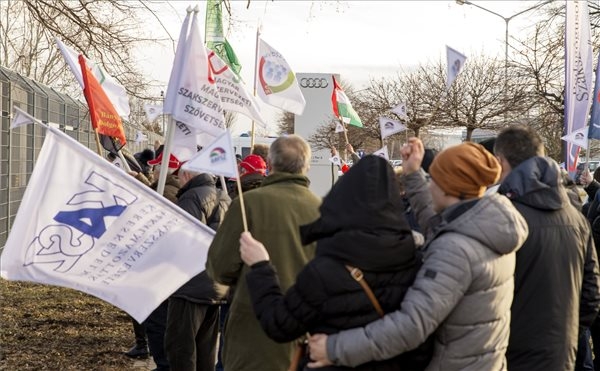 A strike at German carmaker Audi’s plant in Hungary will continue on Tuesday after union leaders and management failed to reach an agreement over wages, a leader of the Audi HungAria Independent Union (AHFSZ) told MTI.

AHFSZ started the week-long strike on Thursday, bringing production at the plant in Győr (NW Hungary) to a “practical halt”. Audi employs some 13,000 people at the base.

AHFSZ counts more than 9,000 of those workers among its members. The union is demanding a wage increase of at least 18%, but no less than 75,000 forints a month.

Tibor Szimacsek, a member of AHFSZ’s governing body, told MTI that the management had made an offer on Monday to raise wages by 18%, or at least 75,000 forints a month, and to ensure all workers have at least one free weekend a month, while reducing the threshold for non-wage benefits to an annual 300,000 forints.

He said the union had rejected the offer as a “forced draw”. Audi was forced to put production on hold at its headquarters in Ingolstadt on Monday after deliveries of engines from Győr stopped.

An Audi spokesperson told MTI that the forced shutdown in Ingolstadt would last at least until Wednesday, a day longer than earlier planned.