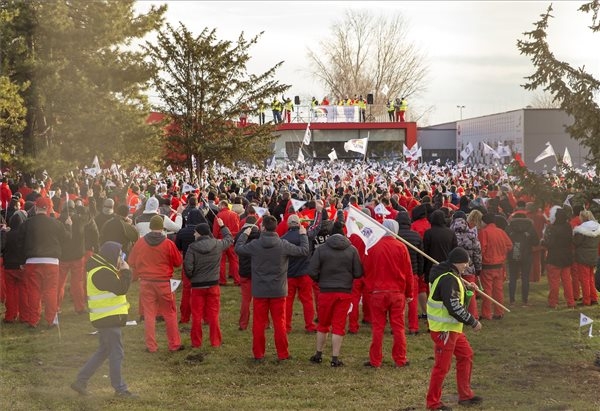 On the fifth day of the wage strike of the workers at the Audi motor works in Győr, a business website remarks that Audi workers are among the best paid in Hungary, while a pro-government columnist praises the Audi Trade Union for its resolute stance in defence of workers’ interests.

Most of Audi’s 17 thousand employees have been on strike for the fifth consecutive day, demanding an 18 per cent wage increase, instead of the average 8 per cent offered by the management.

The number of workers on strike has increased day by day, although they are not being paid for the strike period (they get some compensation from the trade union’s reserves). The strike is scheduled to continue until Thursday.

Meanwhile, assembly lines at Audi’s home production site at Ingolstadt in Germany have been halted until Wednesday because the engines supplied from Audi Hungary are indispensable to continue the assembly of several types of Audi cars.

Portfolio’s István Madár thinks the strike must be proving a headache to the Hungarian government, because Audi produces from 1 to 1.5 per cent of Hungary’s GDP. He warns that Hungary must gradually change its economic model, which attracts foreign investment with relatively low wages, since the increasing shortage of qualified manpower calls for a model based on productivity and innovation instead.

The business analyst thinks the increasing pressure by the unions and the labour shortage itself may prompt Audi to rethink its strategy in Hungary. He is certain that the Hungarian government must be seriously worried about that prospect.

In Magyar Hírlap, Sándor Faggyas welcomes the strike and argues that the employees at the Győr Audi factory are not only paid a fraction of what their German colleagues get for the same job, but they make even less money than their Slovak colleagues.

He calls their initiative ‘a real strike’ and contrasts it to what he calls the ‘politically motivated’ demonstrations organised by leftist trade unions and opposition parties over the past weeks against the increase of the overtime cap from 250 to 400 hours yearly. He advises those trade unions to return to the defence of real workers’ interests.