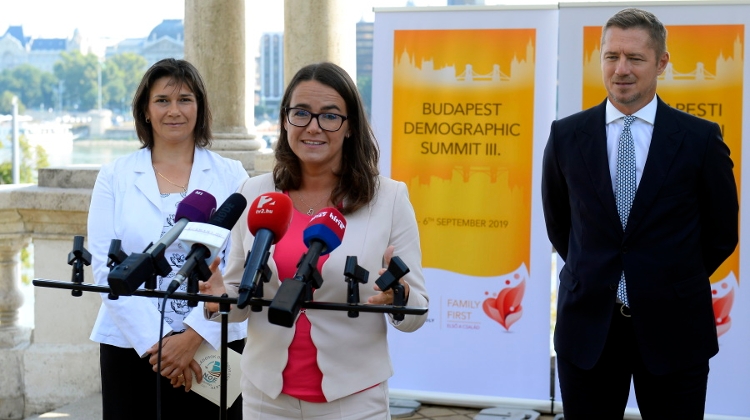 The Hungarian capital is hosting a special demographic summit for the third time after 2015 and 2017, with politicians, scientists, church dignitaries and public personalities giving presentations and exchanging their experiences on current trends, the state secretary for family and youth affairs said.

The event dubbed Budapest Demographic Summit III will be held at Várkert Bazár this Thursday and Friday with participants from every continent, Katalin Novák told a press conference.

The purpose of the event is to discuss demographics, one of the greatest challenges of the current era, because the future depends on what type of people Europe will be populated by and whether Europe will remain Christian, she said.

Hungary is determined to address the problem of population decline, a challenge faced by the industrial nations, and has kept the issue on the agenda ever since 2010. Hungary’s response is a strong pro-family policy rather than encouraging mass migration, the state secretary said.

The Hungarian model has stood the test of time and deserves to be shared with others, she said, adding that “this is why Budapest has become the capital of families for the third time.”

The state secretary for family and youth affairs emphasised the importance of addressing the issue of demography, opening a two-day international demographic summit in Budapest on Thursday.

“The responses we give to demographic challenges will determine our future from a cultural, economic and social point of view,” Katalin Novák said.

“Demography in 2019 is not just one of the many issues to be addressed, it is the most important common issue for us,” she said. Europe has become a continent of “empty cradles”, while several countries in other continents such as Africa and Asia are facing challenges posed by overpopulation, she added.

Participants at the Budapest summit will discuss possible responses to the demographic challenges and share their experiences, said Novák. Addressing the summit, Serbian President Aleksandar Vucic called it important that demographic changes were being addressed as one of today’s top challenges and an issue that calls for immediate action.

Vucic also emphasised the gravity of Europe’s demographic woes in terms of the future of central Europe, and the need for the continent as a whole to find solutions to the problem. He said Serbia was ready to cooperate with Hungary and the other central European countries in tackling the issue. Andrej Babis, the Czech prime minister, said the effects of a population decline on Europe could be almost as severe as those of climate change.

Tony Abbott, Australia’s former prime minister, advocated a policy that sees family support as a means of promoting population growth in place of immigration. He praised Hungary’s family support scheme as unique, saying it should be studied by other countries.