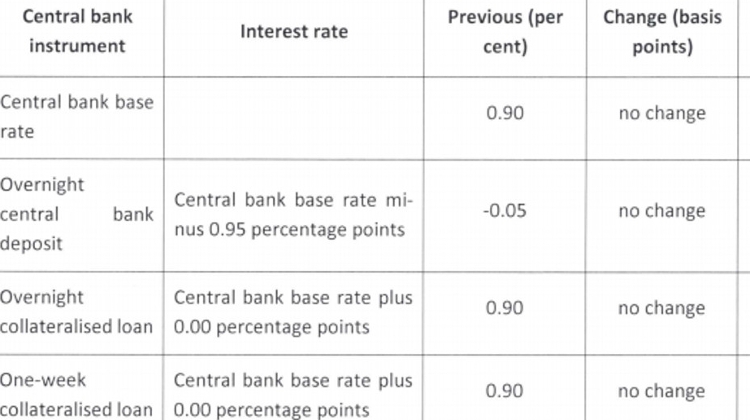 Rate-setters of the National Bank of Hungary left the base rate unchanged at 0.90% and the central bank O/N deposit rate at -0.05% at a regular meeting.

The Council has left the rates unchanged for more than half a year and have tweaked monetary policy on a quarterly basis, coinciding with the publication of the central bank’s Inflation Report.

After the latest Inflation Report was published in September, the rate-setters decided to set the amount of liquidity to be crowded out from central bank instruments in the fourth quarter at 300-500 billion forints (EUR 894.8m-1.5bn), up from 200-400 billion forints in the previous quarter.

The rate-setters take the level into account when setting the stock of NBH swap instruments, one of the central bank’s main policy tools.

In a statement released after the policy meeting on Tuesday, the Council said they continue to “rely mainly” on incoming data and the projections in the Inflation Report.

The Council also reiterated that downside inflation risks had “strengthened further” because of the economic slowdown in Europe, and that the external monetary policy environment had become looser as a result of decisions by leading central banks.

“According to global leading central banks’ indications and market pricing, a loose monetary policy environment will be persistently maintained, and additional moderate loosening measures can be expected,” the Council added.

The Council repeated that its monetary policy stance would continue to be “accommodative” and that economic agents’ financing costs “will be favourable”.