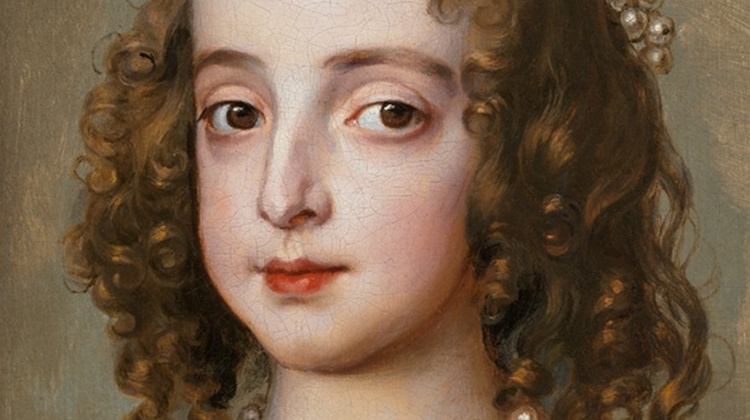 The Museum of Fine Arts in Budapest has just made its most valuable new acquisition in recent history, and thus secured a real masterpiece for the Old Masters’ Collection: The Wedding Portrait Of Princess Mary Henrietta Stuart.

The museum says this acquisition of a work by Anthony van Dyck, one of the greatest masters of European portrait painting, was made possible by generous support from the government.

The exceptional picture is the wedding portrait of Princess Mary Henrietta Stuart (1631–1660), eldest daughter of King Charles I of England.

This masterpiece that was completed in 1641 will be a real treasure in the museum’s collection.

The portrait is presented to the public in the Michelangelo Hall, in an exhibition organised for this special occasion.

The image of Princess Mary Henrietta is displayed together with a selection of portraits of royal children and Van Dyck’s early works from the museum’s collection.

The wedding portrait of Princess Mary Henrietta was one of the last works painted by Van Dyck.

So far, the Museum of Fine Arts only held two very early works by the painter: the poetic image of Saint John the Evangelistfrom around 1619–1620 and the Portrait of a Married Couple that Van Dyck painted at the age of nineteen but it nevertheless attests to his exceptional artistic skill and subtle human insight.

The depicted couple is not so young anymore, however, their holding hands symbolise their unity and the ring gleaming on her finger commemorates a wedding just as in the portrait of Princess Mary Henrietta that was created much later.

Charles I of England wanted his eldest daughter, Mary Henrietta Stuart, to marry William II, Prince of Orange. The dynastic marriage was aimed at strengthening the alliance between England and the Netherlands.

The ceremony was held on 2 May 1641 but the marriage could not be consummated since Mary Henrietta was nine and William was fourteen years old. (Their child, who would be the English king as William III, was only born nine years later.)

In the wedding portrait, the princess has a wedding ring on her left hand, and wears on her dress the large diamond brooch she received as a wedding gift from her husband. In the exhibition, we can see the parents and the husband of the princess in engraved portraits.

Children of rulers were regularly portrayed in European courts. Among the portraits of children displayed in the exhibition, there are several who were somehow connected to Princess Mary Henrietta.

Balthasar Charles, Prince of Asturias, two years senior to Mary Henrietta, was one of the princess’ possible husbands-to-be. He was also her cousin, just like the children of “The Winter King”, Frederick V of the Palatinate.

Sending a portrait of a princess to another royal court served to prepare a dynastic marriage. From the moment of her birth, Margaret Theresa of Spain, the half-sister of Balthasar Charles, was the fiancée of Leopold I, Holy Roman Emperor and Hungarian King, therefore, her portraits were regularly sent to the Viennese court.

In the portrait displayed at the exhibition, Margaret Theresa is nine years old, the same age as Princess Mary Henrietta in Van Dyck’s painting that is now held by the Museum of Fine Arts.