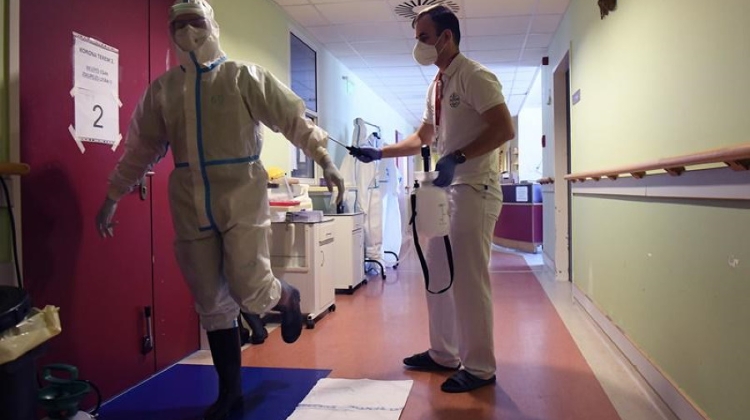 Health care is prepared for the management of the next wave of the epidemic, Prime Minister Viktor Orbán stated in a video message uploaded onto his social media account on Saturday morning.

After reviewing the state of protective and containment measures in health care, the Prime Minister said “it was a tough morning”.

He highlighted that there are more than ten thousand free hospital beds – for the event that the situation should deteriorate – ventilators “are in order,” and almost unlimited hospital capacities are available. Not a single Hungarian will be left without care should they contract coronavirus infection, the Prime Minister laid down.

In the video message, Mr Orbán said they had prepared a fair number of decisions for the Wednesday cabinet meeting. They would like to make sure that the few rules that there are in relation to the wearing of face masks, shopping and travelling on public transport are enforced, he pointed out.

He stressed that they are asking people to observe these rules; if they do not, however, from now on there will be sanctions.

According to the Prime Minister’s information, they are able to operate schools, three elementary schools and sixteen nursery schools had to be temporarily closed down, while in the rest of the institutions education “continues in the normal order, more or less”.

He added that from 1 October, upon entry into school buildings, everyone will be required to have their body temperature checked.

He announced that the government is close to determining an official price for coronavirus tests.

The price of tests will be officially fixed; they will decide on the exact figure at the Wednesday cabinet meeting, he said, adding that they will be able to make available the vaccine against the flu free of charge in the entire country for anyone who requests it on a voluntary basis.

After the meeting of the Operational Group, the Prime Minister will meet with the members of the economic cabinet “because one of the goals of the fight against the virus is to save human lives, while the other one is to protect Hungary’s viability,” he said.