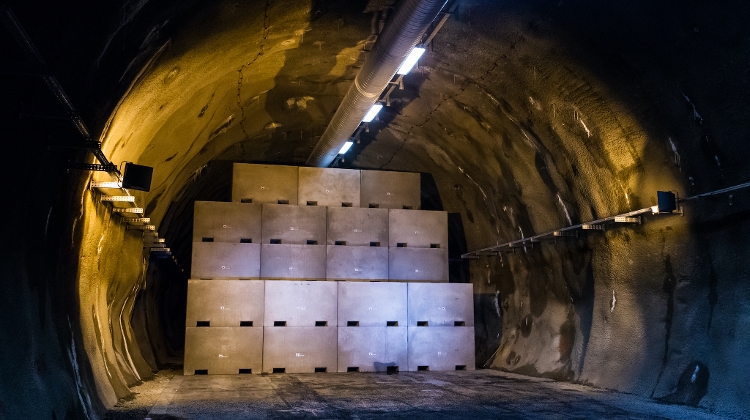 Low- and medium-intensity radioactive waste is planned to be transported from Püspökszilágy to Bátaapáti for final disposal.

Although last December the head of the National Radioactive Waste Repository site only mentioned 400-500 barrels of radioactive waste at a partnership meeting, the environmental permit of the Baranya County Government Office already lists 4 100 200-litre barrels, totalling 820 m³ of radioactive waste.

The Radioactive Waste Treatment and Disposal Facility in Püspökszilágy is responsible for the treatment and storage of non-nuclear, low and intermediate level institutional waste.

This type of radioactive waste has been generated in Hungary since the 1950s, mainly in the course of industrial, agricultural, medical, research and educational activities, in parallel with the use of isotope technology.

The radioactive waste is received and processed in the plant building and stored in temporary containers and tube wells in the basement storage area.

Two years ago Atlatszo investigated if the repository at Püspökszilágy actually contains the same type of waste as it is indicated in the documentation from 30-40 years ago.

It also emerged that there may be problems with the packaging of this waste: official documents have confirmed that in the past some waste was put in nylon bags, which is not a long lasting and modern method of packaging for radioactive waste.

Also, as we reported back then,  groundwater tritium levels have been rising in monitoring wells in the repository area since the early 2000s and high levels of radiocarbon have been measured in the area in recent years. This was confirmed, among other things, by the documents we requested.

In the 1970s and 1980s, isotopes with long half-lives and other radioactive sources were also placed in the storage pools. The Public Limited Company for Radioactive Waste Management acknowledges that “recent safety analyses have shown that there is a long-term potential for events to occur where the public could be exposed to these materials and receive doses higher than permitted, for example during house building or road construction”.

However, they believe that “to avoid this, waste packages should be removed from the pools and the problem can be eliminated by sorting, compacting and repackaging”.

In 2017, the Public Limited Company for Radioactive Waste Management started to make the repository safer in three phases, the second of which will involve the extraction and treatment of waste, while the third will involve the closure of the pools.

As part of the Safety Enhancement Programme, a significant amount of radioactive waste would be transferred from the Püspökszilágy facility to the repository in Bátaapáti.

In 2005, the residents of the municipality said yes to the National Radioactive Waste Repository (NRHT) in Bátapaáti in a vote called by the local council. The above ground part of the facility was opened in 2008, while the first underground storage chamber (at a depth of 200-250 metres) opened in 2012.

The total capacity of the storage facility is planned to be 20 thousand m³,”which will provide sufficient space not only for the operating lifetime of the plant but also for the low and intermediate level radioactive waste generated during decommissioning”.

It is worth to note that, contrary to the information on the website of the Public Limited Company for Radioactive Waste Management, the Baranya County Government Office claims that the total capacity will be 36 thousand m³, which will include the amount transferred from Püspökszilágy.

The operator of the facilities has recently submitted an application to the Hungarian Atomic Energy Authority for the modification of the operating licence for the storage facility in Bátaapáti in order to permanently dispose of part of the radioactive waste of institutional origin from the storage pools (sorted, classified, treated and repackaged) and some of the radioactive waste stored temporarily at Püspökszilágy.

The Public Limited Company for Radioactive Waste Management claims that the process can be carried out safely. The Hungarian Atomic Energy Authority  has launched an administrative procedure on the matter.

Details have been requested from both organisations through a freedom of information request. It was previously reported that 400 to 500 200-litre drums were planned to be transferred to the K2 storage facility from Püspökszilágy to Bátaapáti.

The responses we have received from the Public Limited Company and the government office give very different figures. The company states that 4 100 barrels, equivalent to 820 m³ of radioactive waste are planned to be transferred from Püspökszilágy to Bátaapáti.

According to the Baranya County Government Office  – issuing the environmental permit – this would mean approximately 95 transports per year, i.e. 1-2 transports per week. We have asked this authority what the reason for the difference is, but have not received a reply by the time of publication of this article.

Public Limited Company for Radioactive Waste Management would arrange the transfer of this waste by road using vehicles designed to meet the transport requirements of radioactive materials.

The transfer of waste packages would go from Püspökszilágy to Bátaapáti via Kisnémedi, Váchartyán, Vác, the M2 motorway, Budapest, the M0 motorway, Érd, the M6 motorway, Kismórágy. If for some external reason waste  could not be transported on these routes, alternative routes are available.

We asked the mayor of Bátaapáti for his opinion on the developments. Szilárd Krachun told Atlatszo reporters that when they originally agreed to build the repository in the municipality, they agreed to store low and intermediate level radioactive waste of domestic origin, although at that time only the waste of the Paks nuclear power plant was considered.

He added that in 2019, when he was not the mayor, the idea of transferring the waste was mentioned vaguely, but he only  heard about it from a written memo which also said that the issue would be revisited later, after the local elections.

The mayor said that the managing director of the state-owned radioactive waste management company, Ferenc Kereki, told the Bátaapáti council in February that the amount of waste to be transported is about 5 m³ per year only.