Updated: 'Desired Beauty‘ Exhibition in Budapest, in Collaboration with the Tate 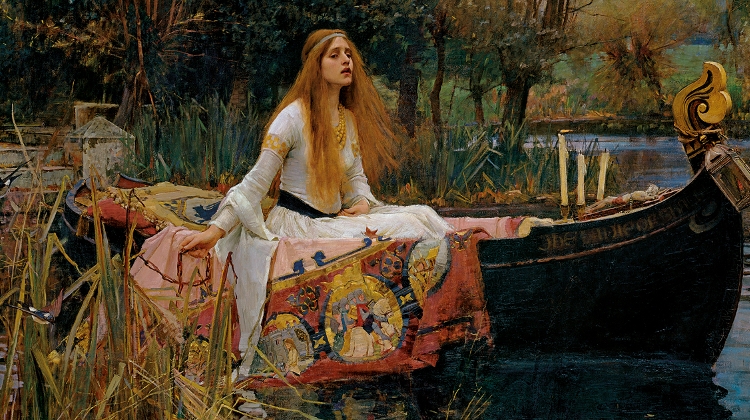 Extended until 19 September 2021. The first comprehensive exhibition entitled Desired Beauty, displaying the works of the Pre-Raphaelites, in on view in the Hungarian National Gallery in collaboration with the Tate.

The exhibition, which presents the unrivalled Pre-Raphaelite collection of Tate Britain – including the masterpieces of Dante Gabriel Rossetti, John Everett Millais, and John William Waterhouse – is accompanied by The Beauty of Utopia – Pre-Raphaelite influences in the Art of Turn-of-the-century Hungary, showcasing the impact of the movement in Hungary.

In revolt against the conservative educational principles of the Royal Academy in London, Dante Gabriel Rossetti, John Everett Millais, and William Holman Hunt founded the seven-member Pre-Raphaelite Brotherhood (P. R. B.) in 1848.

As the choice of the group’s name also suggests, its members regarded medieval and early Renaissance art, predating Raphael, as their model.

Embracing the theories of John Ruskin – a prominent art critic and social philosopher of the period, and later their patron – the young Pre-Raphaelites made an attempt at a thematic and stylistic renewal of painting in their depictions of nature as well as their works inspired by the Bible, historical events, literature, and addressing social issues.

Following the break-up of the group in 1853, Rossetti became the leading figure of the second phase of Pre-Raphaelite art, and his aesthetic movement exerted great influence across Europe.

Joined by Edward Burne-Jones and William Morris, he looked for connections between the fine arts, poetry, and music and under the spell of the cult of beauty, sought to demolish the borderlines between genres.

Opposed to the soul-destroying, mechanised world and mass production of the industrial revolution, Morris advocated the importance of building aesthetic environments and reviving handicraft traditions.

He initiated the total art movement of Arts and Crafts, extending to the various branches of fine and applied arts.

Art in nineteenth-century Hungary was primarily shaped by Austrian, German, and French influences. However, the British-Hungarian relations that developed at the turn of the century facilitated the productive effect of Pre-Raphaelite art, the Arts and Crafts movement and numerous English artists on Hungarian literature, fine and applied arts as well as in architecture.

The most notable influence of the Pre-Raphaelites was manifest in the ars poetica of the Gödöllő artists’ colony and the early period of Lajos Gulácsy’s oeuvre, but other Hungarian artists also drew inspiration from their English contemporaries.

The exhibition documents the influence of the Pre-Raphaelites in Hungary in four thematic groups: the works made by the Gödöllő artists’ colony, the paintings of Lajos Gulácsy’s “Pre-Raphaelite period”, the English influences in Hungarian art at the turn of the century, and also Pre-Raphaelite prints and drawings that are of major significance in the history of our museum’s collection, including pieces by Dante Gabriel Rossetti, Edward Burne-Jones and Walter Crane.

Aladár Körösfői-Kriesch founded the Tolstoyan, Symbolist – Art Nouveau artist colony in 1901, after settling in Gödöllő. The art theoretical writings of the art critic John Ruskin, who was of great importance for the Pre-Raphaelites, also fundamentally shaped the ars poetica of Körösfői, and his book on Ruskin and the English Pre-Raphaelites was published in Budapest in 1905.

The oeuvre of the Gödöllő artists’ colony is also presented with its antecedents harking back to the romantic historicism of the English Pre-Raphaelites, as well as to the work of William Morris, who revived handicraft traditions and initiated the Arts and Crafts movement, and also in the art and activity of Walter Crane.

In the spirit of all the artistic aspirations of the period, works were made in many branches of fine and applied arts in Gödöllő: paintings, murals, graphics, sculptures, furniture, embroidery, textiles, tapestries, glass windows, costume designs, book illustrations and art books.

The “Pre-Raphaelite” period of Lajos Gulácsy

Gulácsy spent most of his narrow creative years, almost a decade and a half, in Italy. During this time, he lived and worked in numerous Italian cities. Moving away from space and time, he created a unique literary and pictorial atmosphere.

The subject of his admiration between 1903 and 1908 was primarily early Renaissance painters; Fra Angelico, Fra Filippo Lippi and Botticelli, and Dante’s writings, artists who previously had a great influence on the English Pre-Raphaelites.

In Italy, at the turn of the century, the Pre-Raphaelite artists had been worshipped, so Gulácsy could have been influenced simultaneously by the paintings of Rossetti and Burne-Jones, as well as the original Italian works that inspired the British artists.

English influences in Hungarian art at the turn of the century

The inspiring knowledge, as well as a kinship in style, subjects, and motifs with English art, can be presumed in the case of a great many Hungarian artists.

The prints of Rossetti and his pupil, Burne-Jones, were donated to the Museum of Fine Arts in 1934 as outstanding pieces of Pál Majovszky’s large-scale collection of drawings.

By the turn of the century, like in other European countries, the art of the island country had become popular in Hungary.

The English connection of the Hungarian art scene is reflected in Walter Crane’s exhibition in 1900 at the Museum of Applied Arts in Budapest.

In Hungary, a real cult developed around the artist at that time, for the reason that Crane, like the group of artists organised around Aladár Körösfői-Kriesch, encouraged the discovery of folk art motifs.

Numerous works by Crane from this exhibition got into the collection of museums; many of his graphic works have enriched the British material of the Museum of Fine Arts.

And of particular interest, our exhibition also includes the masterpiece by the English artist, entitled Abduction of Europa (1881), which entered the collection of the Hungarian National Bank in 2020 from a private collection in Hungary.

The public can view 79 artworks (17 paintings, 59 graphic sheets, 1 sculpture and 2 tapestries) from the collections of the Hungarian National Gallery, the Museum of Fine Arts, the Museum of Applied Arts and the Ernst Gallery in Budapest, as well as from those of the Janus Pannonius Museum in Pécs, the Municipal Museum of Gödöllő and the Ignác Tragor Museum in Vác; this is supplemented by numerous documents, books and photographs.

Closing of exhibitions starts at 5.30 pm at the top floor;
Ticket office:  until 5.00 pm
Entry is allowed until 5.00 pm – also with pre-purchased or free tickets.