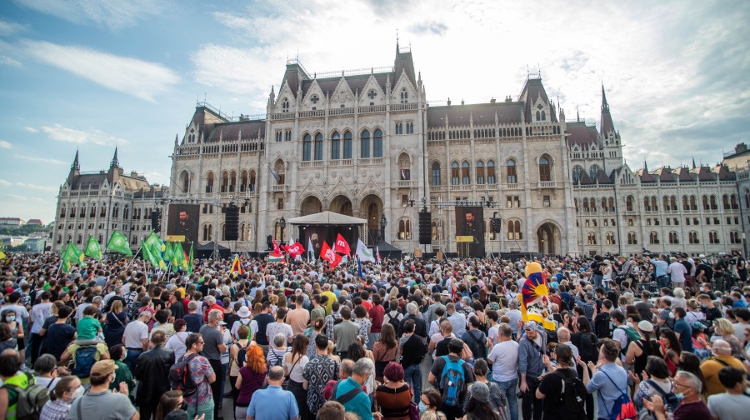 A crowd of several thousand people marched from Heroes Square to Kossuth tér on Saturday afternoon in a protest demonstration against plans to build a Fudan University campus in Budapest and against the government more generally.

Marchers carried party flags, EU flags, Tibetan flags and signs with messages such as "we will not be a colony", “a Hungarian university from Hungarian money," and “traitors”.

Some came dressed as Winnie the Pooh or caried Pooh dolls, as the children’s story character is banned in China.

Organiser András Jámbor, an opposition candidate for Parliament, told the gathering that the Fudan University will be built only “over our dead bodies”.

He said the question in next year’s elections is not whether Orbán or Gyurcsány, but whether to give the oligarchs’ money back to the people.

In a festive atmosphere, Ninth District mayor Krisztina Baranyi rhetorically asked Fidesz voters how they lived with the contradiction that they thought Gyurcsány had indebted the country, but now Orbán is taking out huge foreign loans of this amount.

Budapest mayor Gergely Karácsony, speaking in front of the famous photograph of a civilian topping Chinese tanks during a Tiananmen Square protest in 1989, said “the issue of Fudan University is about whether we will be a free nation. Whether there are those who will perceive politics as domination instead of service in Hungary. The case of Fudan University is the final and complete moral suicide of Fidesz”.