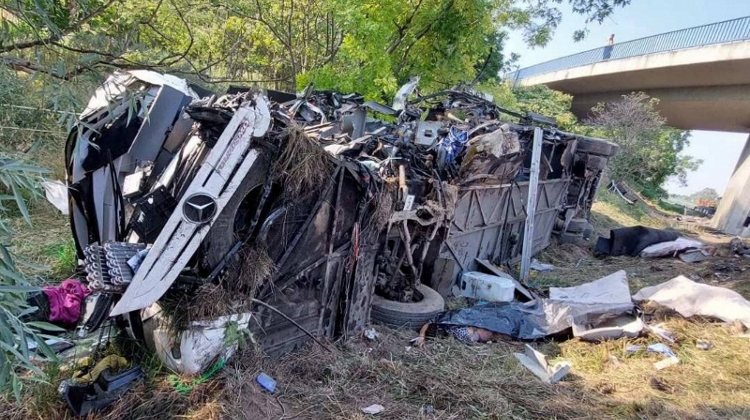 Eight people died when a Hungarian bus crashed and plunged into a roadside ditch on the M7 motorway 70km from Budapest at 4.55 a.m. Sunday morning.

Fire-fighters from Székesfehérvár and Sárszentmihály worked to rescue about 50 passengers from the front and rear of the bus.

The bus was carrying Hungarian tourists travelling home from a trip to Croatia and was on its way to Budapest when the accident occurred.

The eight dead include the driver. He apparently drove the bus off the road, smashing into the pillar of a flyover before the vehicle overturned.

HVG adds that the driver may have fallen asleep or took ill.

Those injured were taken to hospitals in Siófok, Veszprém, Székesfehérvár and Budapest.

Roland Szabó, the head of travel agency RoliTúra, told Origo that the company had organised a one-day trip to Croatia.

The group left Budapest Friday evening and spent a day in the town of Baska on Krk island, from where they left on Saturday night for the Hungarian capital.

Prime Minister Viktor Orbán conveyed his condolences to the families affected by the bus disaster and wished a speedy recovery to the injured on his Facebook page.