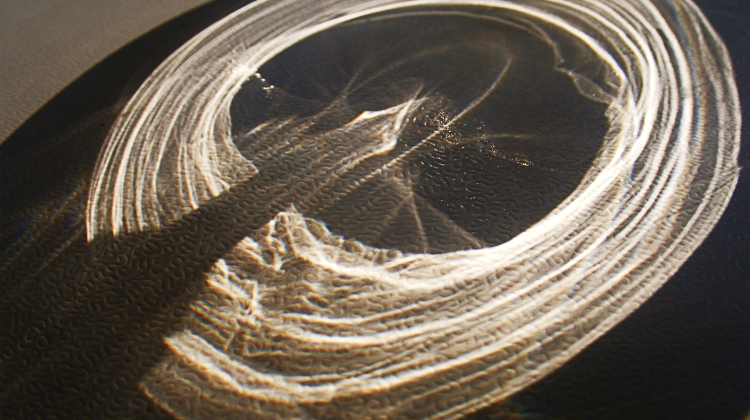 Visiting is free of charge until 4 September. Many have observed the visible nature of light through the phenomena it creates, whether it appears as a shadow or a rainbow created by a ray of sunlight shining through a transparent surface.

Furthermore, these optical phenomena can become the subject of investigation, in the 17th century just as well as now, in the beginning of the 2020s.

There and then, for the craftsman Jakob Böhme (1575–1624), it was a shaft of light cast on a pewter dish that opened the way to the world of contemplation, leading him to write several important works of European religious philosophy based on his experiences.

Here and now, it provides a starting point for the visual artist Gyula Július to investigate the effect of light on metal surfaces and pieces of plastic, and to create his series of photographs. It is not only the material of the surface that is important in this process of observation but also the form of the object made from that material.

The ‘enclosures’ that hold the mere reminiscence of things – officially known as vacuum-formed thermoform blister packaging – evoke the real objects they had contained, and, although the casings used to protect them are now empty, they still hold the already invisible contents as a kind of mold, with their evocative power of absence. And, as a result of the illumination, these objects become even more three-dimensional, losing their mundanity, and their emptiness is filled with an indefinable content beyond the object it “evokes.”

In Gyula Július’s experiments, light projected onto these surfaces creates different degrees of abstraction: it can evoke the image of a lost object, but it can also transform the once transparent plastic containers into peculiar surfaces, giving them a new life, so that they become the source of other associations, and start working as light-frottages.

The exhibition presents not only the finished works, but also the starting points of the creative process, the collection of “plastic wraps”, while also offering an opportunity in the installation space to continue one’s own observations.