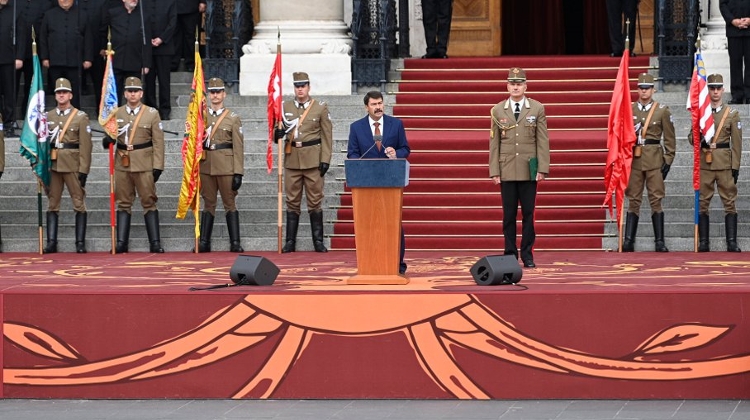 Hungary’s national holidays, regardless of whether they commemorate events from decades or centuries ago, send a message of unity, President János Áder said on Friday at a celebration of Hungary’s St. Stephen’s Day national holiday.

The past year and a half made it difficult for Hungarians to commemorate their national holidays together, as many suffered serious losses because of the pandemic, which has claimed more than 30,000 lives, Áder said in his speech at a swearing-in ceremony of new officers in Kossuth Square.

“Under the siege of the pandemic, when we had to endure more and more trials every day, when we had to live from one wave to the next, the liberated joy of celebration seemed more than a light year away,” the president said.

“During this time we could hardly see ourselves as those who would carry on the glorious past,” Áder said.

“We far more resembled our ancestors who had experienced so much misfortune.”

The president added, however, that although Hungarians “had to give up so much in the past several months”, they had also come to “recognise all the things that we can hold onto”.

“It turned out that there is something beyond the ultimate limit of fear and pain that pulls us back from the edge of the vortex, … that we have strength in reserve within ourselves and in the community,” he said.

The president said the pandemic had also shown people “that we have compatriots working day and night in hospitals, elderly care homes and ambulances, and that there are soldiers who work to serve us every day”.

Áder urged the new soldiers taking their oaths to see not just the heroes of the past, but also each other as role models.

“And in all those who in the past months have shown us what loyalty and the service of the homeland is about.”

He said the pandemic had also proven that no task or form of service was too small.

Áder urged the new officers to remember that by wearing their uniforms they were considered symbols of loyalty and humble service.

“Defeating the pandemic has had a price, too,” Áder said.

“We fought and suffered for it. This task was appointed to our generation.”

“We were the ones who had to adapt, to survive and start over, just as our ancestors had to so many times over the past thousand years,” he said.

The president’s speech and the oath-taking ceremony were preceded by the hoisting of the national flag by a ceremonial guard in front of Parliament.

The ceremony was also attended by Defence Minister Tibor Benkő, army chief Romulusz Ruszin-Szendi, representatives of the government, the state and the military; and diplomats, as well as several hundred onlookers.