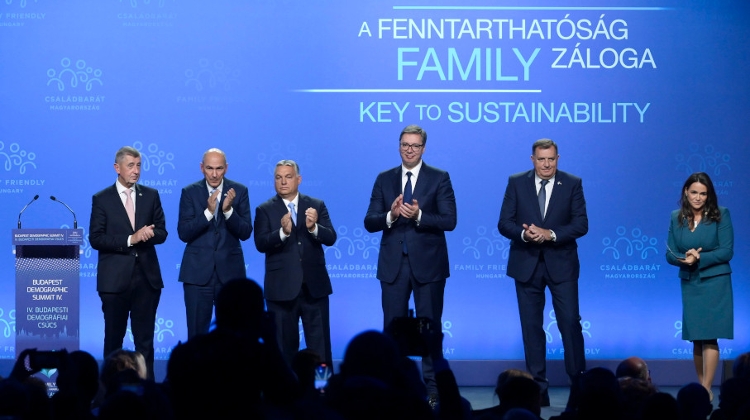 “While certain civilisations are able to reproduce, the West is simply unwilling to sustain itself,” Prime Minister Viktor Orbán told the 4th Demographic Summit in Budapest.

“Some don’t see this as a problem,” while others would use migration as a solution, he said, adding that this would be tantamount to adopting “a global plan to resettle a new working class”, and such a plan would ignore the cultural aspect of migration.

“Migration is a matter of identity here. A European country can only function if its members have largely the same views on the basic questions. Nations in Europe that lack that common ground are bound to disintegrate,” he said.

Economic approaches to solving the issue are not viable in Europe, he added.

Orbán said he had noticed “with concern neo-Marxist woke movements rapidly gaining popularity” in the West, with “attempts to sidetrack the development of children in kindergarten”, as children were being used as “pride activists” and to promote gender change.

He said the situation was very different in central Europe, where “the nature of Marxist ideas is well understood because people had to live with them for forty years”.

“We’re vaccinated against wokeism and our history is protecting us against the cultural left, the same way as vaccines give protection against the coronavirus,” he added. Hungarians were being protective, he said, because the Western left had launched attacks against the traditional family model by relativizing the concept of family.

A means for this is the LGBTQ lobby and gender propaganda, he added. “They target our children, so we must protect them,” he said, adding that Hungary had a constitutional system for family and child protection which was “automatically activated when the family is seen to be under threat”.

The most important protective line of defence in the family protection system, he said, was the constitution, and he cited the sections of the constitution referring to families, marriage and children.

Orbán said that while Hungary had held National Consultation surveys and popular votes in an effort to strengthen these lines of defence, nobody in western Europe or Brussels had ever canvassed people’s opinion on “LGBTQ propaganda” or migration.

Orbán noted that Pope Francis, visiting Budapest two weeks ago, had expressed his encouragement for Hungary’s family policies. “He said we should not stop. And we will not give up; we will pursue our fight against Brussels for child protection.

Hungarians do not make empty promises. Instead of repeated pledges, all I can say is that we stand here because there’s no other way. We know our job,” Orbán said.

At the opening of his speech, Orbán greeted former US Vice President Mike Pence attending the meeting and urged him to “return as soon as possible”.

He also greeted the prime ministers of the Czech Republic and Slovenia and reminded them that they were “fighting for central European interests, the sovereignty of their countries, Christian heritage and the security of the European peoples.”

In his greeting to the presidents of Serbia and the Serb member of the Presidency of Bosnia and Herzegovina, he said the future of the Balkans would determine the future security of Europe.

Brussels, he added, must not be allowed to continue the centuries-old policy of using the Balkans as a buffer zone in lieu of their own comfort and security.

Meanwhile, Katalin Novák, the minister without portfolio in charge of family affairs, said the Hungarian government had been working to help families and turn around a 40-year downward trend. She said the government has seen it as an “opportunity and duty” to work for families backed by a mandate from voters.

Novák said a “demographic winter” was threatening the developed world as well as Hungary. The summit is focusing on the connections between demographics and sustainability, featuring some 70 speakers from 18 countries, Novak said earlier.

Some 500 are participating, including state and religious leaders, scientists and NGOs.

Addressing the summit, Aleksandar Vučić, the Serbian president, said the issue of demography was becoming the most important political question as it concerned “our survival”.

The Serbian government learnt a lot from the previous demographic summit, he said, and introduced several measures modelled on the Hungarian system.

In the context of social media and its influence on the public, Vučić said “liberal political Marxism” had enticed people to pay attention to things that changed aspects of their lives but at the same time led them to lose other aspects.

Vučić also touched on the topic of the rule of law, which he said had become an issue that could be used to bring “disobedient” countries into line.

Vučić said Europe had been contributing less and less to global economic growth in recent decades, adding that within a few decades Nigeria alone would have a larger population than the European Union or the United States. “It is high time to act,” he said.

Slovenian Prime Minister Janez Janša called population decline a huge problem affecting the future which could not be ignored. “The European Union is currently debating the future of Europe and … this gathering today is one of the most important parts of this debate,” he told the summit.

Janša noted that the birth rate in Europe had dropped by 40-70% since the 1950s and 17 out of the 27 EU member states had a negative birth rate which had worsened during the Covid crisis.

“We need bold proposals, some kind of a European programme to put the family first,” he said.
Milorad Dodik, the Serbian member of Bosnia and Herzegovina’s presidential troika, said Europe needed to favour the family over migration.

Europe needs to remain stable not just economically but also in the area of demography, he said, adding that this required support for families.

Dodik praised Hungarian Prime Minister Viktor Orbán’s family policies and expressed hope that they would be adopted by more and more countries in Europe.

Czech Prime Minister Andrej Babiš said Europe needed to increase its birth rate in order to halt its population decline. He said the coronavirus pandemic had proven that nation states built on families were irreplaceable.

Although the Czech Republic has seen an increase in its birth rate in recent years, it still has a way to go to reach the 2.1 fertility rate necessary to maintain its population, he said.

Babiš criticised the argument that having fewer children would reduce one’s carbon footprint, saying it was “absurd” not to have children in the interest of climate protection.

The heads of state and government participating in the 4th Budapest Demographic Summit signed a joint declaration on supporting families.

“We see Europe’s demographic renewal, sustainability and future in strengthening and supporting families,” Katalin Novák said at the event.

The minister said the declaration bound its signatories to encourage couples to have children, promote fair wages and the development of labour-based economies by pursuing effective family policies.