Support for Opposition List Slides 6 PP From 2018 in Hungary 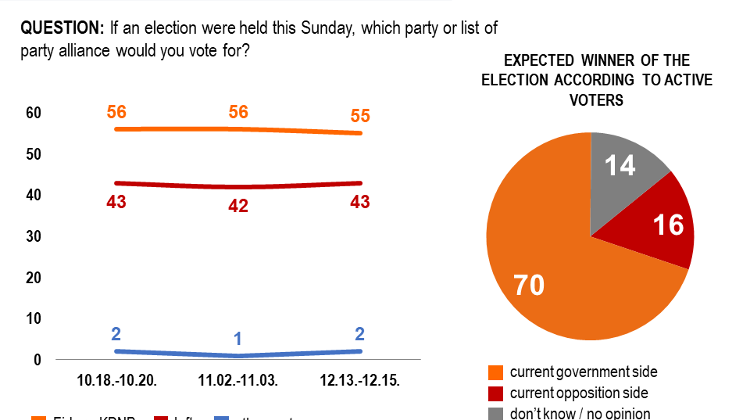 If the general election was held this weekend, the ruling Fidesz-Christian Democrats (KDNP) would win 50% of the vote, while the opposition would garner 43% - a 6-point drop from its results in 2018, a fresh poll of the Nézőpont Institute has shown.

According to the poll published in the Monday edition of the daily Magyar Nemzet, the ruling parties have gained 3% among all active voters resident in Hungary since 2018.

Of the 43% who would support the opposition alliance, some 33% are considered decided voters, the pollster said.

The Two-tailed Dog party (Kétfarkú Kutya Párt) and Our Homeland (Mi Hazánk) poll around three percent, the highest among smaller parties but still well below the parliamentary threshold.

They would need to add some 120,000 voters to their camps to make it to parliament, Nézőpont said.

At the election likely to be held in April, the turnout is expected over 70%, or 5.7-5.8 million voters at the ballot domestically, Nézőpont said.