Demo Held in Front Of Public Media HQ in Budapest 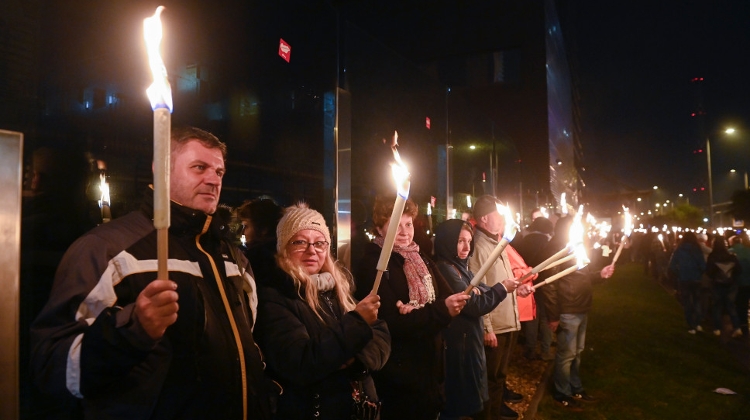 A demonstration organised by independent lawmaker Ákos Hadházy was held in front of the public media headquarters in Budapest on Friday evening. The demonstration began with a minute of silence in honour of the revolutionaries of 1956.

Addressing the event, historian Krisztián Ungváry said: “Lies are not only told by spewing severe untruths … [but also through] fake national consultations, fake parties, a fake parliament and a thousand other means.”

Orsolya Varga, a teacher, said teachers had been deprived of their security, peace and freedom, which “have been replaced by lies, hate and intimidation”. She said it was now doubtful whether teachers could continue making a living, adding that there was no future without teachers.

Hadházy said that “since we’re living in a hybrid regime rather than a democracy”, a “hybrid revolution” was needed for there to be a chance of ousting the government in an election.

“Propaganda serves to divert the anger of our compatriots [from those in power], and success depends on how many people join in on putting pressure on propaganda,” he said. Hadházy called for protests and demonstrations aimed at “causing a disturbance” so that the government would take notice of the strength of the protests.

“A lot of people must peacefully create the conditions for fair elections,” he said, calling on the demonstrators to form a blockade around the public media headquarters, vowing the protests would continue until the head of public media provider MTVA stepped down.

Krisztina Baranyi, the mayor of Budapest’s 9th district, said Hungary had not been in such a desperate situation as it was today since the crushing of the 1956 revolution.

She said that while Hungary’s neighbouring nation was fighting for its homeland, “Hungary again finds itself on the dark pages of history because of the Putinist Hungarian government”. Baranyi insisted that Prime Minister Viktor Orbán’s policies “reflect the interests of Russian President Vladimir Putin”.

She said Orbán was isolated in Europe, but was “taking the Hungarian nation down with him as well”. The mayor said it could not be ruled out that the government was setting the stage to take Hungary out of the European Union and NATO. “This is what we must prevent,” she added.

Edina Hajnal, of the action group Hungarian Mothers – creative resistance, protested at what she called “lies pouring on people, [produced] from their own taxpayer monies.”

Gábor Polyák, a communications expert, said MTVA had been set up to dilute editors’ responsibility. The institution served one party rather than the public interest, he said. The opposition, he added, “still have tools in their hands”. “It is time to use local media to inform people of reality,” he said.

The stage sported banners saying “1848, we demand the freedom of the press and the abolition of censorship”, and “1956, free Kossuth Rádió”, referring to two Hungarian revolutions against tyranny.