Hungarian National Anthem is Message from Past to Present, Future Generations, Says Orbán 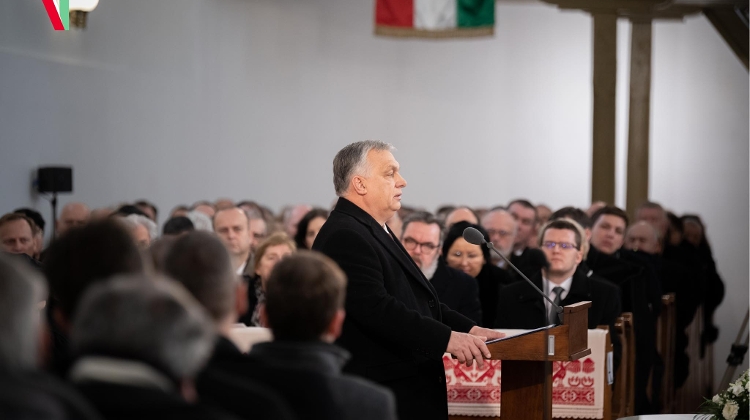 Hungary’s national anthem feels to Hungarians as if it were a message from every Hungarian who had ever lived throughout the country’s history, Prime Minister Viktor Orbán said on Sunday, marking the Day of Hungarian Culture.

It feels like a message “not only for us Hungarians living today, but to every Hungarian that will live in future”, Orbán told an ecumenical worship service in Szatmárcseke, in north-eastern Hungary, where Ferenc Kölcsey penned the Hungarian national anthem in 1823.

He said it was “worthy and just” for the Day of Hungarian Culture to be observed on the day of the birth of the national anthem.

“No other work over the last 1,000 years lifts the hearts of Hungarians the way the national anthem does,” Orbán said.

If Hungarians had to find a work that expresses everything that is Hungarian “and makes Hungarians Hungarian, we would have to choose the national anthem”, he said.

Noting the funeral of Miklós Duray, a recently deceased ethnic Hungarian politician in Slovakia, this past Tuesday, where he last sang the national anthem, Orbán said the singing of the anthem had been meant not as a goodbye, but to “lift him … into the pantheon of Hungarians”.

Though the national anthem is a prayer that would “demand a posture of penitent humility”, Hungarians sing it standing with their heads held high rather than on their knees with their heads bowed, he said.

The national anthem contains “that mysterious and elusive thing … which we can call Hungarianness, Hungarian fate and Hungarian genius,” the prime minister said.

“It is the form and quality of creation and existence that only we Hungarians are capable of.”

“The national anthem reminds us that we Hungarians — like all Christian people who understand sin and forgiveness — have a good reason to repent,” Orbán said.

“We Hungarians are not without sin, either. Our faults and shortcomings are also numerous. The only question is what to do with this recognition and admission,” he added.

“Should we take the knee in the middle of the football pitch? Or tear down the statues of our great ancestors?” Orbán said.

“Should we disown and erase our thousand-year culture? Or should we let the self-appointed, stateless and liberal censors sift through and rewrite the history of Hungarians?”

“In the most important sentence of Hungarian literary history, Kölcsey says otherwise: ‘This nation has suffered for all sins of the past and of the future!'”

Orbán said, quoting the anthem. But in a Christian reading this is “not a carte blanche” to commit more sins, the prime minister warned.

“With a Christian soul, this sentence means that though the number of our sins may be high, God hasn’t wiped us from the face of the Earth,” Orbán said.

“Even if he has punished us, he lets us continue our history. And the only reason being is that our virtues and merits are also numerous.”

Hungary, just as it was 200 years ago on the day its national anthem was written, remains Hungarian, Prime Minister Viktor Orbán said on Sunday, marking the Day of Hungarian Culture.

Addressing an ecumenical worship service in Szatmárcseke, in north-eastern Hungary, where Ferenc Kölcsey penned the Hungarian national anthem in 1823, Orbán said that thirty years ago he had believed that Hungarians’ merit was their unwavering desire for national independence.

Hungarian heroes who had died “under the blood-stained flags of freedom” earned the nation its right of survival, he added.

He said he still believed this but also believed that it was necessary to “fight our freedom fights not merely for the sake of political independence and economic and political self-determination”.

“We always fought our biggest battles … for the right to remain who we are and to live the way we want” and not “how others tell us to”, he said.

“We have always found the paths for our own life,” Orbán said. Even when it couldn’t be openly written on the flag, everyone knew that we are who we were and will be who we are.”

The prime minister also greeted the city of Veszprém, in western Hungary, a European Capital of Culture in 2023.

Orbán: ‘Adherence to Ourselves is the Key to Survival’

If there is a virtue that deserves the reward of survival, “it is adherence to ourselves”, Prime Minister Viktor Orbán told an ecumenical worship service in Szatmárcseke, in north-eastern Hungary, marking the Day of Hungarian Culture.

“This is why we once again cannot be entrapped by the sirens telling us to be on the right side of history,” he said.

This is the reason why Hungary refuses to get involved in a bloody war and demands a ceasefire, talks and peace, Orbán said.

Hungarians have learned that “the right and wrong sides of history will be determined by the major powers that eventually prevail, and they don’t in the least bit care what is good or bad for Hungarians,” he added.

“We must stay on the Hungarian side of history even in the most complicated and most difficult situations,” Orbán said.

He said that though Hungary was a landlocked country, it was “an island”. Hungarians arrived in the Carpathian Basin 1,100 years ago and were surrounded by foreign peoples, he said.

They founded a state and established a Hungarian way of life “which we have stuck to for more than 1,100 years”, he said.

“We decide who can enter the country and who can stay here; who can live with us and who can’t, and we also want to be the ones to determine the connections of our life with our neighbours,” the prime minister said.

“We’re not better or worse, just different,” he said. “And this difference comes from Hungarian culture.”

“We are the Hungarians, who are not and will not be inferior to other peoples, and in our own special nature we are at least as good and respectable a people as any other,” the prime minister said.

“Everything else concerns only God.” “We will see who will be left standing in another two hundred years, and which peoples will be screened out by the Lord of history,” he said.