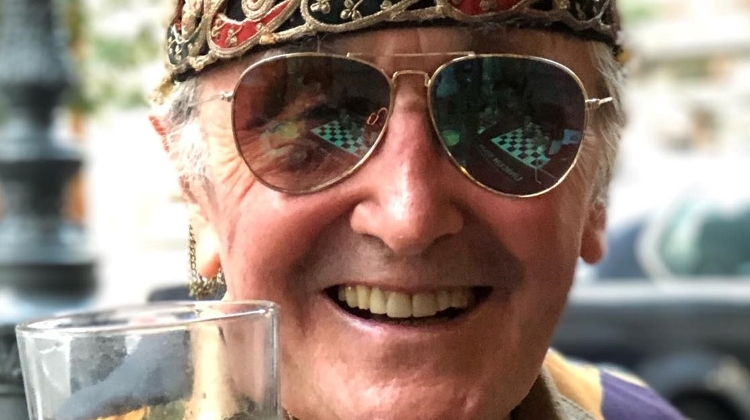 This is part of a series of in-depth interviews with some surprising members of the community, written by Marion Merrick.

As strange as any of the films that Mark Rimmell worked on, is the plot of his own life; in particular, the months he spent at the Marriott hotel, sitting on his balcony and staring across the Danube at the building in which he would later come to live.

In 2005, Mark was working in Budapest for five months as part of the crew shooting Eragon. “I was a set decorating buyer,” he explains. “Quite a bit I got on Ebay, or I bought from shops here, from Ecseri and elsewhere, and I also made a lot of what was needed myself.”

Before the end of filming Mark already knew he wanted to settle in Budapest: “I was three months into the film when I thought this is the place. It was like a magical revelation.” Against the advice of his ‘film family’ colleagues, he had found and bought his riverside apartment before their time in Hungary had expired.

Mark recalls his first impression of the flat with its extensive views of the river: “This place, when it was empty, had the appearance of a concert hall – and I did have concerts here,” he adds. 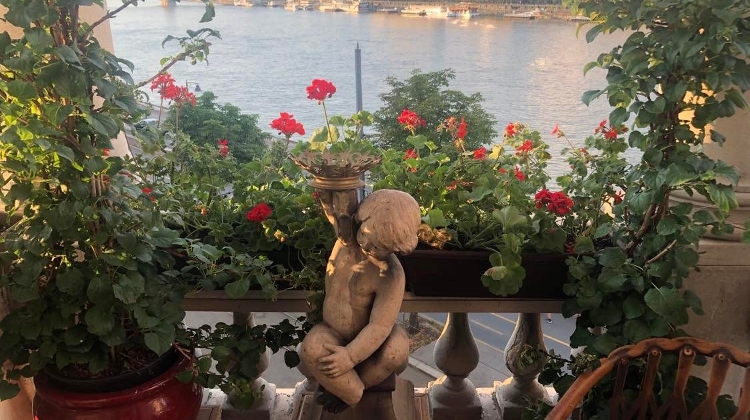 Apartment with a view 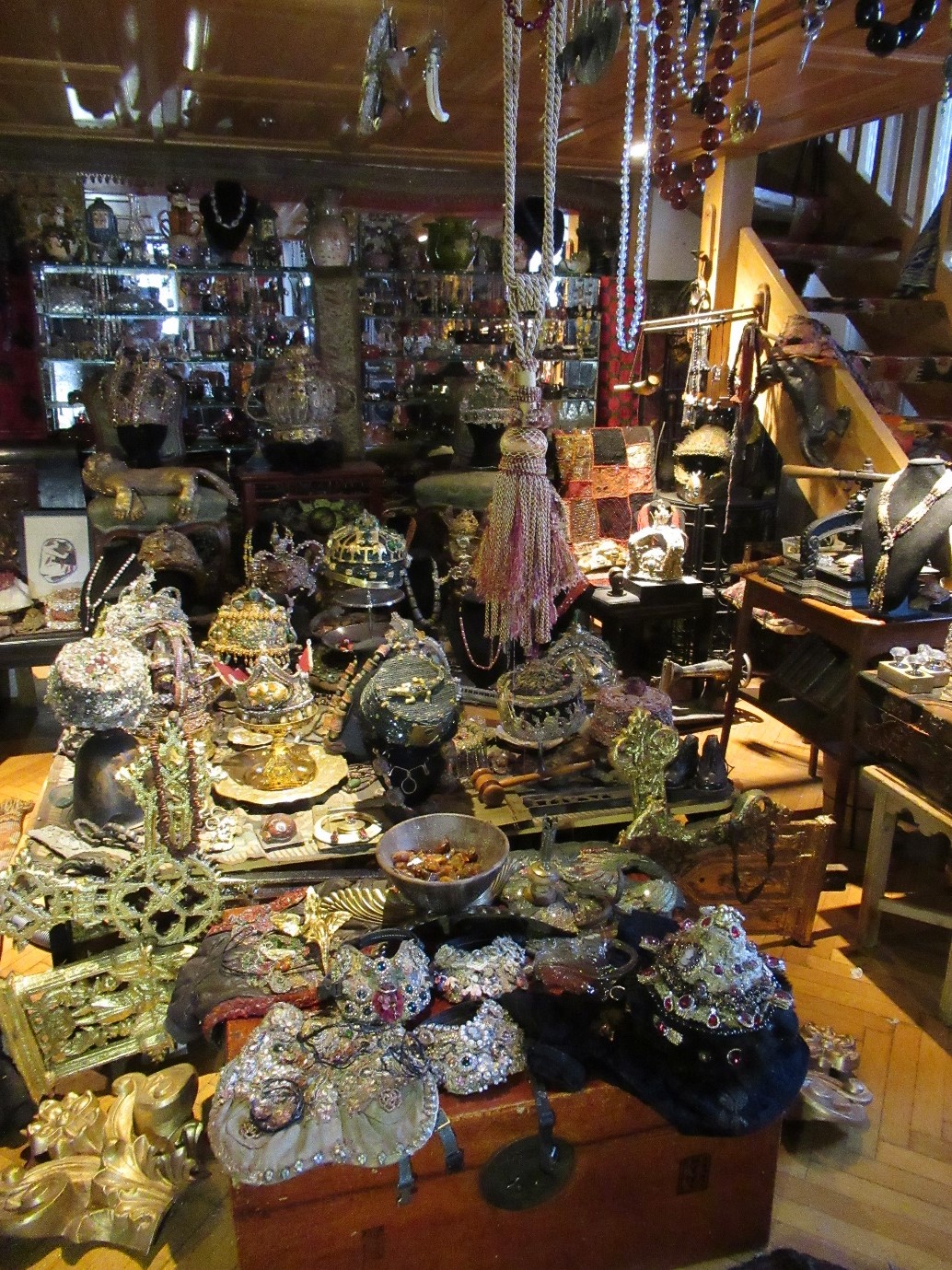 But as Mark recalls, “I never had any ambition to be in the film industry at all…my life began in a children’s home. My Russian-Jewish mother had escaped the pogroms and fled to Palestine where she fell in love with a British soldier. When she became pregnant, he reluctantly agreed to marry her, and they went to live in the east end of London.” However, Mark’s father was determined to free himself from his ‘Jewish princess,’ as he called her.

Shockingly, he had his wife declared insane, and she was interred in the infamous Colney Hatch Asylum where she later died. Coincidentally, Mark found himself there once he was working in films: “We were filming Longitude with Jeremy Irons and one of the locations was the abandoned insane asylum with its five floors and six miles of corridors.”

During the war, Mark was evacuated to the countryside and was cared for by kind foster parents. On finishing school, however, he had no idea of what to do – other than his exceptional singing voice, he felt he had no particular talents, “but I knew that my future lay in London,” he says.

Following up an advertisement in a London newspaper, Mark went into business with the proprietor of an antiques shop in St. John’s Wood. “But I knew nothing about antiques! I used to go to auctions at Christie’s, Sotheby’s and Bonham’s, I went to the Victoria and Albert Museum and antiques fairs, just to learn,” he explains.

Yet before long, Mark realised there were serious problems, and not those occasioned by his lack of knowledge. “He turned out to be a crook,” says Mark of his business partner. “I realised I would have to try and buy him out and run the shop alone,” – and he did.

Mark then set about turning the basement of the premises into an art gallery where students from the Slade School exhibited, including Derek Jarman. However, after seven years, Mark was staring bankruptcy in the face. “But you learn more from failure than from success, I’ve learned,” he concludes philosophically.

The years that followed – decorating the room in a photographic studio, then creating room sets for television advertisements – paved the way for what was to follow: working alongside top set designers in productions like Jeeves and Wooster (with Hugh Laurie and Stephen Fry), David Suchet’s Poirot films including Death on the Nile; Far From the Madding Crowd; Love in a Time of Cholera; In the Name of the Father; Eragon and Hellboy II. He worked with Kate Bush on her music video Cloudbusting, and was nominated for an MTV award for Best Art Direction in Simple Minds’ Don’t You Forget About Me. 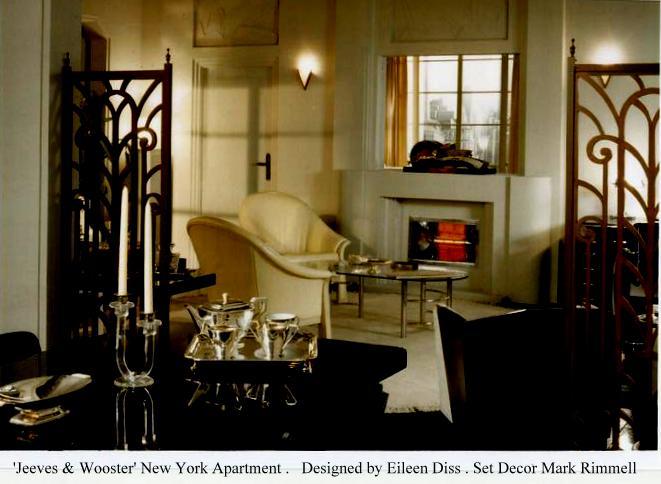 It was in 2005, during the shooting of Eragon, that Mark found himself gazing across the Danube from his hotel balcony. “I just fell in love with Budapest,” he recalls. “Many people fall in love with it – there’s a magical quality about it, just wandering the streets, the whole atmosphere went in straight here,” he says, laying his hand on his heart. 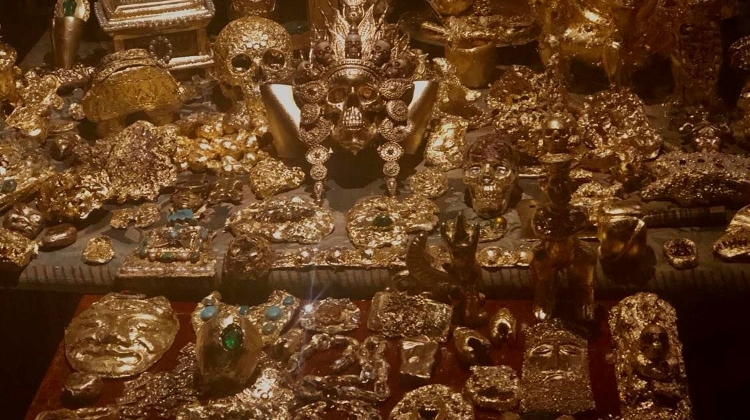 Mark’s props for the film ‘Uncharted’

When his bemused film crew departed, Mark was left alone in his flat. His first contact in the city invited him to visit an exhibition housed in some disused shops in Pest, where he met and talked to the young artists. “Everything had that personal touch,” he muses, “unlike London.”

“I went to the Liszt Academy, to the National dance Theatre; I went to Dob utca to some dance hall where they were doing Hungarian folk dancing on Thursday nights, and joined in. That could never have happened to me in London – never. Always there was some event going on and I would ask myself: what would I be doing in London? And I thought, not very much!”

Though Mark misses the antique shops of London, he no longer felt at ease living there. “When you have to call your neighbour upstairs to go with you to the ATM and stand by while you take money out, that is the time to leave.”

Though approaching the end of his eighth decade, Mark is still busy. In 2013, he created the stunning crown to be worn by the winner of the World Top Model competition, held in Budapest, earning him the moniker “Crown Maker” and which started his new passion for making them.

“I have made between 70 and 80 crowns altogether,” says Mark, “but the last one I made is the most important.” This is none other than his crown for Ukraine: The Angel of Peace and Freedom which took pride of place and was unveiled at the exhibition Mark hosted in December. 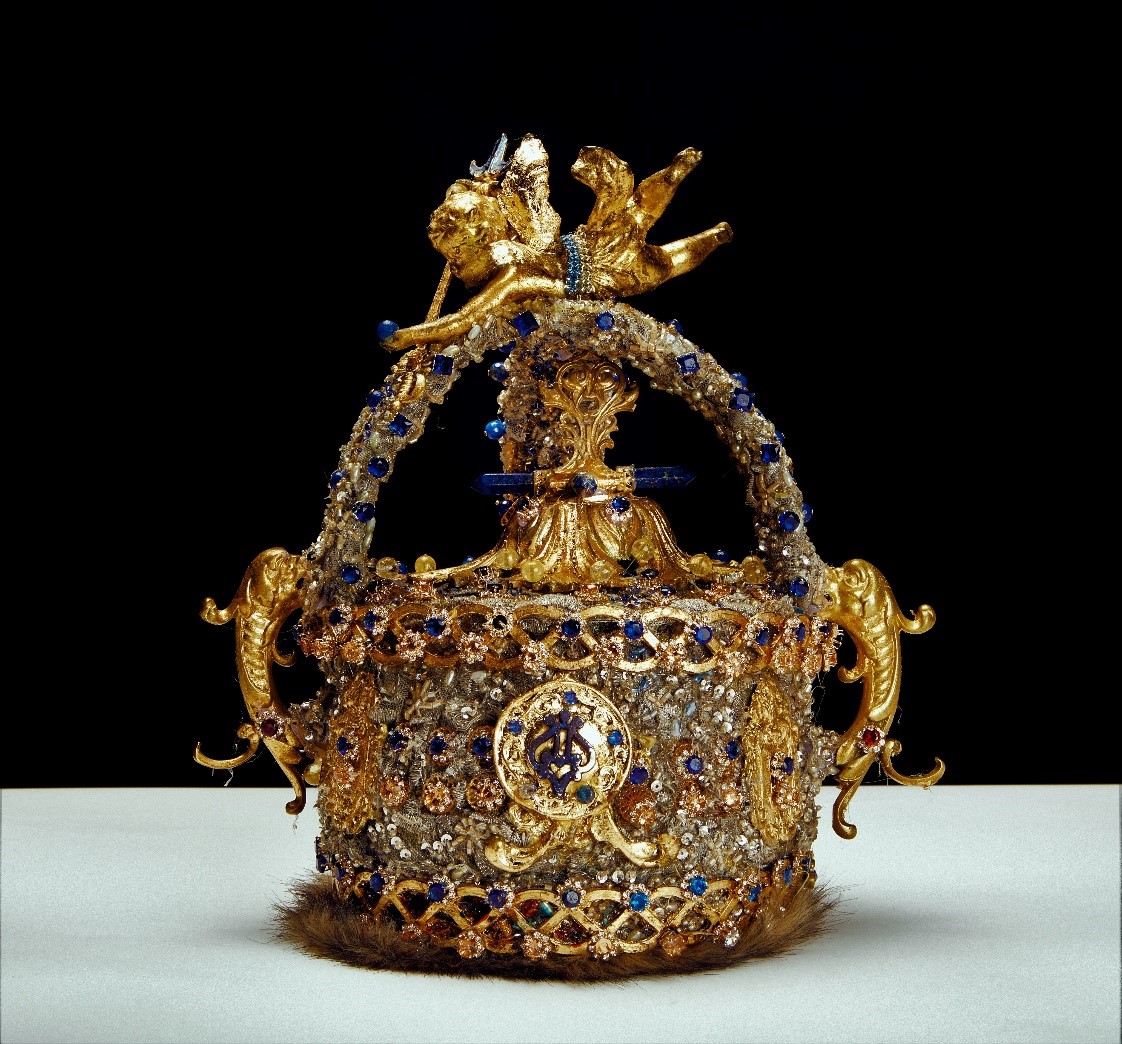 The Angel of Peace and Freedom

Decorated with gems in the colours of the Ukranian flag – blue lapis lazuli and yellow citrine – it is topped with a bronze angel bearing a trident, part of the Ukranian coat of arms.

“My aim is to see that crown on Zelensky’s desk, or maybe in the Ukranian National Museum,” says Mark. Meanwhile, he is reorganising his apartment so that his jewellery, crowns and other treasures can be seen more clearly. “I’m thinking of creating a museum to display my crowns and maybe sell some of my jewellery, but it will take some months yet,” he smiles. “Hopefully in the spring.”

Mark’s days are full. “I go to Toscana every morning,” he says. “I’m there for an hour or so, then I come home…friends ring, we might go to a gallery, or I might go to the art shop and buy some fabric paint to experiment after watching something on Youtube; I read, I’m still exploring the city.”

Mark continues to be sought out by those filming in Hungary, often for custom-made pieces of jewellery. “I was also asked to make three bejewelled skeletons!” he says. “I laid them out on the ironing board. First, I covered them in gold, then I encrusted them in jewels – and they all had crowns.”

“Budapest is known as the Hollywood of Europe,” he continues. “When we made Hellboy II, we filmed in the Korda Studios. We built a set of the streets of New York there – I think they have kept it.”

Mark has an indefatigable enthusiasm for discovering Budapest’s secrets, for life and for people. “I’m always talking to people. You recognise that someone’s probably a visitor and I will say: How are you enjoying Budapest? Quite often they respond, and sometimes the magic happens. For example, I met an American lady who later turned out to be a TV producer from LA, and she looked me up and then invited me to be interviewed on her programme. I know that magic wouldn’t have happened in London!”

He is also not averse to creating magic of his own. “Some years ago on August 20th, I had this fantasy of singing to all the people sitting, eating and drinking under my balcony. I had a microphone and a speaker, so I decided to do it! I got my programme together – the kind of thing I used to sing in the clubs…”

Dressed in a scarlet and gold braid jacket, Mark thus began to serenade the people sitting below him on the riverside. “Seven o’clock, I began. I ended with My Way, and everyone was clapping and cheering! I thought, I’m going to go down and see what the reaction is. People came up and shook my hand, they wanted pictures taken with me! The following evening, I peeped over the balcony and saw people were expecting another performance, but I couldn’t repeat it, the adrenalin was gone.”

Mark will never tire of Budapest. “Budapest is a small jewel. I cannot help myself: when I can, I have to peep through into courtyards,” he admits.

So, if you should be strolling Budapest’s streets, or sitting alone in a café when you are approached by a kindly English gentleman who asks how you are enjoying this city, it may well be Mark Rimmell.

All photographs are courtesy of Mark Rimmell. More photos, and information  about his work are available on his Facebook page.