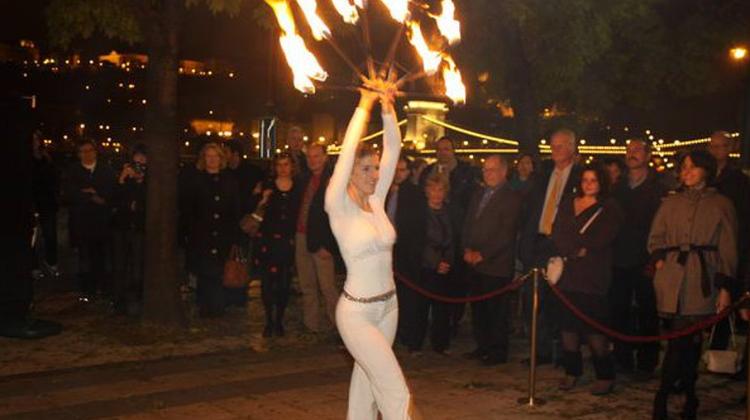 Over HUF 1.1 million was raised for charity at the 11th birthday celebration of XpatLoop.com in 2011. That's all thanks to 200+ guests; many event supporters; and main sponsors: ​​​​​​​Vodafone Hungary, Holmes Place Budapest, Qatar Airways.

Much appreciation and credit goes to the InterContinental Budapest, sponsor of the superb venue and delicious menu. Guests included expats of many nationalities; including several ambassadors; senior diplomats; leading business figures; and a variety of socialites.

HM Ambassador Greg Dorey lit the virtual bonfire and made an entertaining opening speech about Guy Fawkes*. He also made mention of the event organiser at the start and end of his address, here's what he said in conclusion,

“Which brings me back to XpatLoop.com, under Stephen Linfitt, who provide regular news and services for expatriates in Hungary.  Expatriates are an important part of the life of a country. It’s a good sign for the country in question when expatriates want to go and live there. Often they are among the most entrepreneurial and investment-minded inhabitants of the place.

They are among the most generous givers to good causes. They organise great events, such as tonight’s. And they bring vibrancy and diversity to cities which aspire to be international in character.  So tonight let’s also recognise the role of expatriates in our society and thank XpatLoop for drawing attention to them and celebrating their activities.”

Hotel General Manager Mathieu van Alphen welcomed guests and highlighted the chosen good cause, before starting a firework show and inviting guests to enjoy the bonfire-night style food. His speech about the charity was well received, as he touched the hearts of all those present.

Plenty of fun activities kept guests entertained, including a bonfire log cutting game with prizes from the InterContinental Budapest Hotel. Nokia also staged an interactive game with an impressive prize of the new Nokia N9 handset.

With proceeds of HUF 1.1 million we can guarantee many more smiles on the faces of many more children in hospitals in Hungary. A loud “Bravo” to our two main benefactors and all the wonderful Xpat guests and event supporters."

Guest feedback was good, with event organiser Stephen Linfitt saying in summary, "Thanks to everyone involved it was a ‘feel good’ XpatLoop.com event for charity, one to positively remember, remember".

* Traditional Verse: "Remember, remember the Fifth of November, The Gunpowder Treason and Plot, I know of no reason, Why Gunpowder Treason, Should ever be forgot. Guy Fawkes, Guy Fawkes, t'was his intent, To blow up King and Parliament. Three-score barrels of powder below, To prove old England's overthrow; By God's providence he was catch'd, With a dark lantern and burning match."