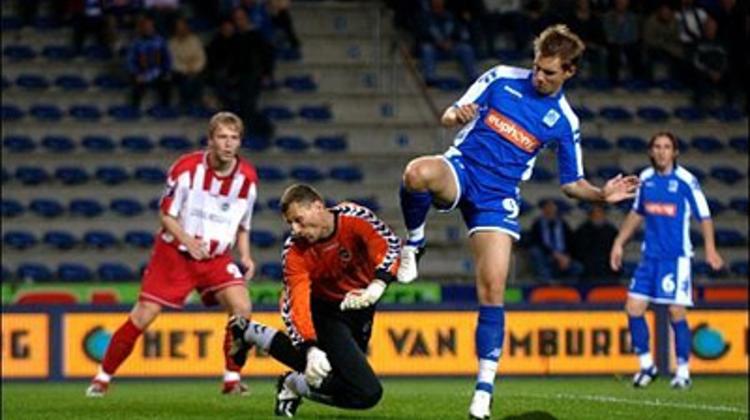 "The winning bid to host the 2012 UEFA cup will be announced in Cardiff on Wednesday. In the running are joint bids from Hungary and Croatia, another from Poland and Ukraine, and one from Italy. The decision will determine not just the location, but our future as well. An event on this scale has implications that go far beyond sport.
Michel Platini sits at the head of the judging panel's 14 members, though the Ukrainian and Italian members will not be voting. Seven votes are needed to win. If no decision is reached in the first round, then the candidate with the fewest votes falls out of the running and a second round is held. If this vote delivers no result, Platini has the casting vote.

Vlatko Markovic, head of the Croatian football association, says: "For us, hosting the European championships is worth more than being world champion, because it will deliver far greater benefits to our economy." Croatia is football crazy according to the German press agency DPA. By contrast, Hungarians seem to have turned their back on football. The national team has not participated in a major international tournament since 1986, and championship matches attract no more than a few thousand supporters. Ferencvaros, Hungary's most popular and internationally famous club, is on the verge of bankruptcy, relegated to the second division.

Croatia has 900,000 hotel beds ready awaiting fans, and it has adequate infrastructure, sufficient international airports and high quality motorways, though the country's stadiums need work. Hungary would have to make some major investments however, though the government has guaranteed to foot the bill. But how willing would the public be to pay extra taxes to cover the costs of the tournament, which will certainly amount to several hundreds of millions of euros.

Portugal spent €800m on hosting the most recent European championship, and arguments are still raging over whether it was a good deal.

Hungary is not planning to spend on that scale. The government has already capped its expenditure at €159.5m. This is unlikely to be enough, even if Croatia's contribution will almost double the expenditure.

The original plan sees the government spending Ft60.6bn on the event - but just building the stadiums will cost Ft100bn. Local authorities and private companies will have to contribute. How this will work is not clear. Public-private partnerships are the most likely option. The government is keen on PPP, the opposition and many auditors far less so.

Building stadiums will cost a lot of money. Though Budapest, Debrecen, Gyor and Szekesfehervar, the sites of the stadiums, can all be reached by motorway, there is no motorway link between Hungary and Croatia. By 2012, therefore, the M7 and the M6 have to be completed. This is likely to happen regardless of the European championships. At the same time, Szekesfehervar and Gyor will have to be linked by train to an airport. This would cost billions of forints, if Szekesfehervar were to be linked with Budapest Ferihegy, 70km away, and Gyor with Schwechat, 100km distant.

The situation is the same with building out the train network. Gyor and Debrecen are at the opposite end of Hungary, and a fast train link will have to be created between them. The railway links to Croatia will have to be modernised. Yet there is no talk of this in the development plan. It is conceivable that the EU can be persuaded to help finance improvements to the Budapest-Murakeresztur line to improve goods transport to the ports in Rijeka, Koper and Trieste.

And then there are the hotels. There is not a single five star hotel in any of Hungary's provincial cities. What companies would be prepared to pay for hotels that are unlikely to see high occupancy rates after the final match of the championship?

And what of those stadiums, refurbished at vast expense? The Ferenc Puskas Stadium can seat 61,000 people - or three times the typical crowd at the final of Hungary's first division final. More people will come only if Hungarian football improves quickly and if hooliganism can be brought to an end. All this will cost.

The last major sporting event held in Hungary is not encouraging. The European swimming championships were eventually held in a mobile swimming pool - after much vigorous argument. Private capital is not always the best solution, as the fiasco surrounding the financing of the Laszlo Papp Budapest Sport Arena shows. Admittedly, the Syma sports hall, built recently near the Ferenc Puskas Stadium, was also a PPP project - and it was more of a success.

And the event would bring in money. Some 1m spectators are expected, and they will be paying for tickets. Television and advertising rights will bring in far more money. But most of that will go to UEFA, who will pay back at most Ft10bn. Experience from other major international events, like the Formula 1 races, show that even two-day events can bring in several million euros - primarily because of the jump in tourism. But the European championships last for weeks. There will be some 200,000 extra guests in the country at all times, and their presence shines the spotlight on the host country. Since the final will be held in Budapest, we will get most of that attention. That could deliver significant long-term yield - adding perhaps a quarter of a percentage point to the country's annual GDP figures - some Ft60bn.

The Polish-Ukrainian bid is the weakest - not least because Ukraine is in a state of upheaval just as the votes are being cast. Although the presidents of both countries have said they will attend the UEFA conference, they may yet be absent. This suggests that they themselves do not believe they have a serious chance of winning.

Commercial issues will decide whether the Italian bid or the joint Hungarian-Croatian bid will win. Is it more important to UEFA to have the support of Italy's well-developed football business or would they prefer to help two small central European countries, strengthening their footballing cultures? It appears that UEFA's executive committee is not in agreement on this, so both sides will give it their all when it comes to giving their presentations behind closed doors.

Tamas Gyarfas, who is heading the Hungarian bid, said Charles Simonyi will argue in favour of the joint bid from space. They will be taking presents - Herend porcelain figurines of Dalmatian and Hungarian puli dogs, and Michel Platini will be presented with a golden football by Albert Florian - who will receive it not on his own behalf, of course, but in the name of UEFA. Istvan Kisteleki, head of the Hungarian football association will speak in Croatian, and Vlatko Markovic, his Croatian counterpart, will speak in Hungarian - to emphasise the depth of the cooperation between the two countries.

The two prime ministers may also appear, as might the two countries' sport ministers. The defender Kalman Meszoly will also be there. The former manager of a Turkish team, his task will be to persuade the Turkish member of the committee. Pal Schmitt, head of the Hungarian Olympic Committee, will be there, and Jeno Buzanszky, a surviving member of Hungary's Golden Team of the 1950s. And Gyarfas insists there are further secret reserves. As to whether this was enough - we will only find out at 11am on Wednesday."