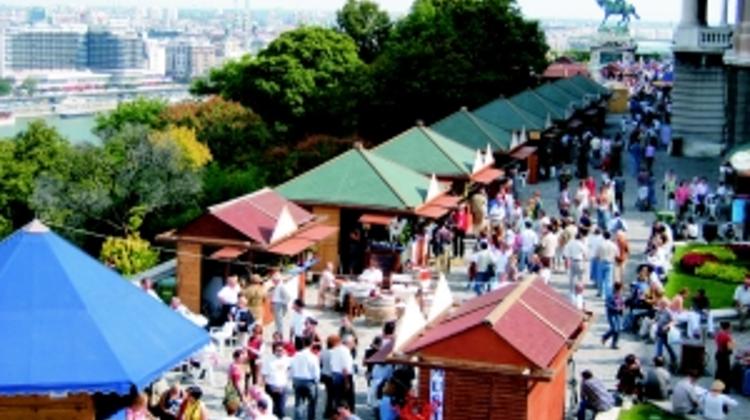 The stunning UNESCO-listed Buda Castle is special any day of the week, but when it hosts the Budapest International Wine Fair, it really is the place to be. The festival, running now until September 12th, features a who’s who of Hungarian winemaking. This easy to read guide lets you know where to walk, drink, and eat. Where to get your glass filled by György Lőrincz, the local reigning ‘Winemaker of the Year’, who the new wine stars are, which regions are best this year, who’s in top form with magically mineral whites, and which blockbusting reds are best. Read on for the full practical article, exclusive to XpatLoop.com

A daily ticket at this, the 19th such annual event, costs HUF 2,300. That includes a tasting glass and holder that you can take away with you, available for purchase near the festival’s main entrance at Koldus Kapu (lit. Begger's Gate). At numerous booths dotted around the festival you can then buy tasting tickets that can be exchanged for wine, and also food.

Around 200 winemakers take time out from the Hungarian harvest, or from their preparations for it, to pour their wines for an adoring public. Vintners and traders explain how the wine is made is all its vinous detail, and bring wine country right to the capital for five fine wine days.

A great starting point is 'Bortársaság', Hungary’s leading wine trader, at stand 117 as you turn right a few meters after entering the festival. The knowledgeable ‘Wine Society’ staff serve top wines from many of the leading regions and winemakers.

A number of prized winemakers who don’t have their own stands also drop in there to serve their wares during the festival. Here, look out for Ottó Légli’s Banyászó 2008, a waxy but fresh and marvellously mouth-filling Olaszrizling (Hungary’s most widely planted white grape) from South Balaton.

Next to Bortársaság, you can find Eger’s St. Andrea which makes very pure tasting wines, notably Pinot Noir, by the hand of György Lőrincz, the reigning Winemaker of the Year.

In the same area there’s the winery of Pannonhalma’s Benedictine Monastery – and its new pristine PRIOR Riesling (known as Rajnai Rizling in Hungarian and not be confused with ubiquitous Olaszrizling) 2009 is well worth a shot. In the corner, the magically mineral whites of Somló, plus one red (a Syrah), are on show at Kreinbacher.

Head along the back wall and around for powerful red blends of Villány Hungary’s hottest region. Among them, Zoltán Gunzer offers top value, with Sauska and Attila Gere also a must.

Winemakers from Szekszárd, which is rivalling Villány in the realm of blockbusting reds, are ready and waiting in the large inner courtyard, as are winemakers from Sopron, the so-called Capital of Kékfrankos (Kékfrankos is Hungary’s most widely planted red grape). In the inner-courtyard, don’t miss the Kézműves Borok Háza (lit. hand made wine house), either.

Winemakers from Eger, which excels in both whites and reds, can be found past the stage on the outer terraces of the castle. János Bolyki’s is a rising force, but his wines are excellently priced. Here, also look out for Csaba Demeter’s Hanga 2009, an award winning white blend.

A nice new addition to the festival is the Balaton Borgaléria, which has some exciting stuff from Lake Balaton and environs, such as 2Ha’s subtle and silky smooth Tabunello Sangiovese, and the more powerful, mineral-infused Cabernet Franc, both from St. György-hegy. Here, the wines of rising Somló vintner István (Stefan) Spiegelberg who is also in attendance, are on offer.

As you come to the end of the festival area, which could easily take the whole day, you’re then hit by the legendary region of Tokaj, which is now also excelling in dry Furmint, and not just sumptuous sweets.  Best come back another day just for Tokaj!

By Robert Smyth for XpatLoop.com

Robert Smyth is the editor of David Copp’s “Hungary: its Fine Wine and Winemakers”  and  “Tokaj: A Companion for the Bibulous Traveller”. He is a member of the UK’s Circle of Wine Writers, and has also written on wine for the Budapest Business Journal, Business New Europe, Budapest Times, and Time Out Budapest. Robert is also a graduate of the prestigious UK-based Wine and Spirit Education Trust (WSET).