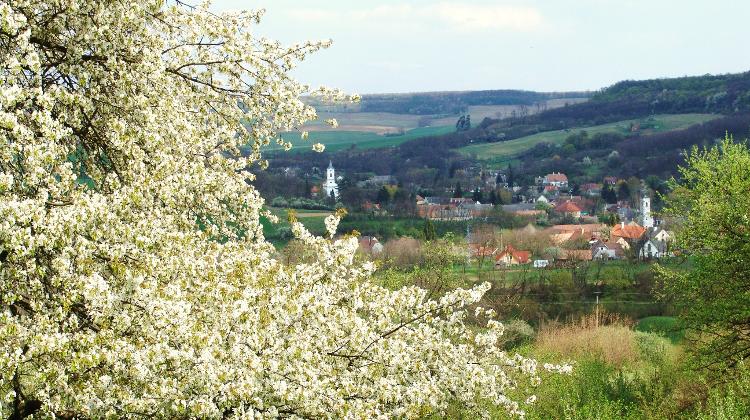 Once upon a time, László and Linda Kondor would have been greatly entertained by the idea that urbanites such as themselves would be happy retiring in Kapolcs Village on a vineyard estate in the Hungarian countryside. Both had lived, and worked for decades in both the city of Chicago and Budapest, but late 2007 found them doing just that - walking away from all they owned and retiring to the never-ending-green.

While living as expatriates in a Bauhaus penthouse in the exquisite city of Budapest, a city escape to Hungary’s Northern Balaton region turned out to be the next chapter of their lives. László, Hungarian-village-born photographer to Chicago’s late Mayor Richard J. Daley, found his way home to the countryside. While meandering through a small village, a discovery of a very old farmhouse and stone cottage for sale captured their romantic and entrepreneurial hearts.

They smile when people ask them why, they know very well they were completely intoxicated by the views. The farmhouse and cottage sit on a summit that overlooks a panorama of red-tiled roofs of Kapolcs Village. The village itself lies in a green valley on the edge of a nature preserve. Home to the Kapolcs Festival, this beautiful region is often referred to as the - Valley of the Arts.

On the spot they resolved to leave the bustling city and bought the ruin of a property on 3 acres of overgrown weed-chocked garden. It took courage to buy and restore these buildings, nevertheless for those who know the determined and experienced couple the outcome was never in doubt. They had previously restored their Bauhaus penthouse in Rózsadomb - snatching it back from years of neglect.

Re-purposing themselves along with the old farmhouse furniture as country gentle-folk was intimidating but worthwhile. Wellington-booted Linda, a former fashionista explains, “After five years of restoration challenges, our exuberance only grows when we watch newly arrived guests literally breathe in the view, making the scary times all worthwhile.” It is an idyllic green location, when not busy with pruning tools; Linda makes jams from the cherries, apricots, plums and quince that grow on her land.

László stocks a special reserve house-wine many local vintners produce for themselves and local customers. The wine is stored in giant green-glass demijohns in a cool limestone-painted pince. According to László, “the very-long tradition of wine production in the region is evident as ruins of wine-producing Roman villas are scattered throughout the area”.

The creative Kondor’s are not lonely. This village in the Valley of the Arts - an insider’s secret since Roman times - is understandably a favourite holiday-home destination of more and more painters, sculptors, musicians, photographers, artisans, and writers. All wisely attracted to beautiful Northern Balaton views of un-spoilt countryside. Join us!

Words by Linda Kondor for XpatLoop.com