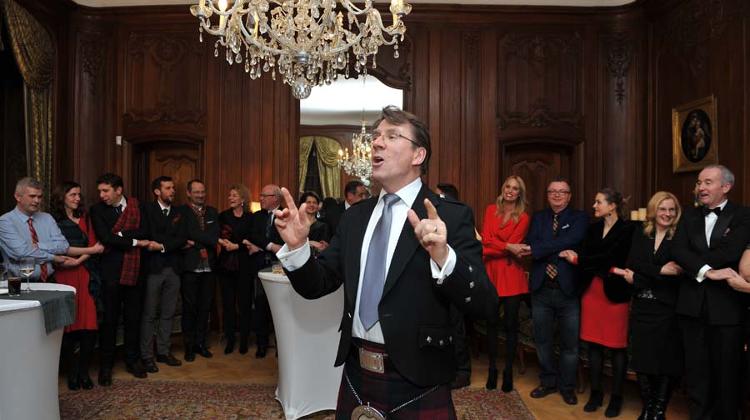 Burns Night, held in honour of Scotland’s most famous poet Robert Burns, is celebrated in the UK and by Scottish communities all over the world on the poet’s birthday, 25 January. On the night, British Ambassador Iain Lindsay OBE welcomed guests at his residence to commemorate the life and works of Burns. The traditional menu included haggis, and recitations of Burns’s poetry both in English and in Hungarian.

The evening also featured fine Hungarian wine and an impressive range of whisky – the British Embassy is very grateful for the sponsorship of WhiskyNet.hu.

The dress-code was a 'Touch of Tartan', and guests got into the swing of things, literally whilst holding hands and singing Auld Lang Syne, written by Burns in 1788, and set to the tune of a traditional Scottish folk song.

In his speech, the Ambassador emphasised the charity angle of Burns Night events, particularly the work of the local Burns charity. “…Here in Hungary, in the spirit of Robert Burns humanitarian philosophy we have the Robert Burns International Foundation, a charity set up in 2005 to raise funds on a sustainable basis to provide support for sick and underprivileged Hungarian children."

The Ambassador praised the people behind the foundation, "It was the President of the Hungarian Scottish Society, Magyar Zoltán, who took the initiative, and he is here this evening with Douglas Arnott (pictured above centre reciting a Burns poem about love), the current Chairman of the Foundation.” Guests raised their glasses as a mark of respect for the successful charity and individuals involved.

"Let me take this opportunity to thank the Foundation and its supporters for all the fantastic work they do,” Ambassador Lindsay concluded.

Zoltán Balog, Minister of Human Capacities, (pictured above left) also attended the event, along with a cosy group of around 50 expat and Hungarian guests.