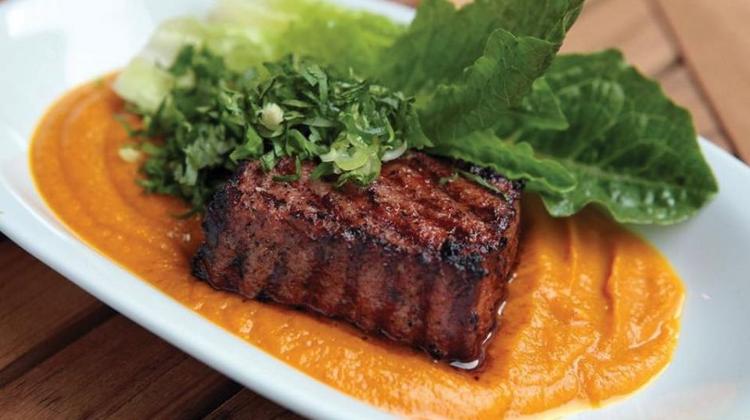 When you combine a Vietnamese pho soup with a Hungarian goulash, you will either get something that tastes horrible or the best culinary experience Budapest can offer at the moment. Chef and gastronome Krisztián Huszár, who has become an important figure in the capital’s gastronomy scene, manages to create the difficult balance between Hungarian and Asian cuisine at his restaurant specialising in fusion cuisine.

Connoisseurs have known the area around Madách Imre tér for a long time as a trendy gastronomy hotspot.

The numerous specialty cafés, bars and new-wave restaurants that have been established around the square with the iconic arches do not attract the tourist masses in the same way as nearby Gozsdu udvar, but rather a colourful public of locals and well-integrated expats.

Although it’s near lively Erzsébet tér and the perpetually overcrowded Király utca, this corner still remains a secret tip.

This is where Huszár’s hip Beszálló Food Bar opened up last October. The tiny restaurant in the former place of the Pista bá pie and soup bistro reminds us of a backyard in Shanghai, with its corrugated wall panels, colourful posters and lampions with orange and blue lightbulbs.

Especially in the evenings, when the lights are on and the waving cat casts its long shadow on the counter, Beszálló Food Bar can make you feel as if you were in the Far East. Their motto, “Eat well, travel often“, strengthens this impression.

Especially those people who have already visited the Far East will be happy to see the familiar ingredients and preparation methods of the Asian cuisine here again. When thinking about the concept of the really personal interpretation of the Hungarian-Asian fusion cuisine, Huszár was inspired by the eating culture of Japan, Thailand, Vietnam and India.

Besides some typical Hungarian dishes, which are served in an unusual way though and refined with far-eastern spices, such as the breaded chicken fillet with wild garlic potato mash, you can also find mixed dishes on the menu, for example the carp fillet with lentil dish garnished with baby corn from Thailand.

Huszár, who gained a reputation while working for restaurants such as MÁK, ZONA and the Szenesrestaurant Konyha, is not scared to touch Asian-Asian mixed dishes either, such as the Udon dandan. This creation consists of home-made udon noodles from Japan atop a sort of Chinese beef bolognese called dandan.

However, at Beszálló Food Bar not only the main dishes present unique taste combinations: As appetisers, or simply as small snacks for the evening, the restaurant offers among other things fresh mango slices, accompanied by chili salt.

The already mentioned Vietnamese goulash soup, which can be flavoured to choice with lemon juice or fresh coriander, and the tartar prepared from Angus beef are other appetisers that meet the highest culinary standards.

With so many temptingly exotic dishes, making your choice is rather difficult. If you are with two or three people you should just take your chances and order a large portion of appetiser selections for the whole table.

This establishment will not become boring even after many visits, since the menu card of about a dozen dishes is updated every one or two weeks.

Beszálló Food Bar is an ideal place for going out with friends to enjoy a few bites in an extravagant, yet very relaxed atmosphere. Besides the unusual dishes the personnel, who are very open and ready to make jokes, the fresh, yet unobtrusive music selection and an exotic selection of drinks and cocktails ensures a good time.

The drink selection is almost a bit “too hip” – for example, you cannot opt for a traditional Coca-Cola or Pepsi, instead they offer sugar-free fritz-cola in their range of caffeine-loaded alternatives, which is not to everyone’s taste and is quite expensive too at HUF 790 for a litre.

Still, you will quickly forget any hard feelings after an Asian-inspired coriander-gin tonic or a bottle of Dead Pony Pale Ale, which are also part of their selection.