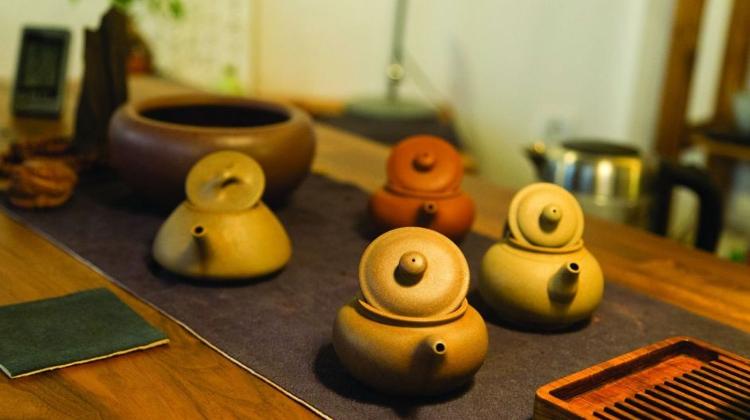 The Kong Ming Tea House jokingly called itself the “most slowly opening teahouse” in the city before it was finally opened. Half a year ago Balázs Szigethy and his sister Eszter began to prepare traditional Chinese tea for their guests, which takes a lot of time and even more expertise.

“As with everything, there are two ways in which tea can be prepared: a right one and a wrong one,” Balázs Szigethy laughs when we ask him about the difference between British tea customs and the way it’s done in Kong Ming.

He claims himself not to be a professional tea expert, who graduated from a Chinese university's tea department, but since he has previously spent more than two years in China he has learnt a lot about tea culture from teachers, professors, teashop owners and tea lovers from all around the globe.

He also added that to understand tea culture one needs to speak it's mother language Chinese, so that one can fully understand it's depth and deeper connotations, also one needs to be careful whilst studying tea culture hence even English translations are wrong sometimes.

At Kong Ming they put a lot of emphasis on authenticity. “In the 8th century during the rule of the Tang dynasty, Lu Yu wrote down in the ‘Book of Tea’ how to prepare tea, and the process has hardly changed ever since,” Szigethy explains Tea leaves are sensitive and they quickly lose their healing power, “although we should be drinking tea in general equally due to its unique taste and its effects”, he says.

While talking, he prepares the brew with practised movements. He breaks pieces of tea from an about 30-centimetre large flatbread and puts the pieces in a little clay pot, which reminds us of a tea set for dolls.

The cups he uses are not large either, such as those from which we leisurely sip our hot tea on cold winter evenings. Rather, they are tiny fragile-looking bowls. The first infusion serves to rinse the leaves and the cups once. The second infusion can be consumed.

“You can prepare only one type of tea in every pot,” we learn. The reason is that the unpainted clay pots absorb the taste of the drink. Tea is poured from the pot over a filter made of a dried pumpkin to the “right cup” as it’s called; and from there it goes into the picturesque drinking cups.

The colour of the tea changes from one infusion to the other. “Similarly as with wine, there are vintages for tea too,” Szigethy says. “The older a tea is, the more infusions you can prepare from it.”

The colour of the drink changes every time and so does the taste. “The tea, when you infuse it, has a spring, a summer, an autumn and a winter. But you should not drink the winter anymore, since that is like robbing the dead,” he laughs.

You can choose from a dozen or so teas at Kong Ming. You can take your time and run your own small tea ceremony right there if you like. However, they also offer everything you need to brew up at home.
“In general you need three things for preparing tea at home: a pot for infusion, a pot for distribution and a cup.”

Furthermore there is a tool that helps to loosen the tea from the packaging and another one for cleaning the infusion pots. All the items mentioned – and tea too, of course – are for sale at Kong Ming so you can make your own at home.

There are some points to which you need to pay attention: “You need to know about tea that all the sorts are made out of the same raw material, the Camellia Sinensis,” Szigethy says. “The different tea types are formed during the fermentation process.”

Green tea is unfermented, which is why its taste is the mildest of all. White tea has an about 10% fermentation and yellow tea 20% fermentation.

The completely fermented tea is called red tea, “but it’s translated into English as black tea, which is wrong.” Furthermore there is the re-fermented black tea, called Puh Er tea. You can try them all at Kong Ming, or even at home.

When you enter the tea house hidden in District XI, you will experience a bit of Chinese culture. This is very important for the siblings, since by bringing the tradition of tea drinking here they would like to bring a piece of the Far-Eastern world into this country by offering a place for cultural exchange.

If you would like to not only experience the enjoyment of the drink, but learn more about the hundred years of history behind the tea, you are suggested to try one of the tea tastings. Several types are offered, since each has different taste notes according to their origin and time of ripening.

The tasting is best done with friends, because as Szigethy says: “In China drinking tea together is a friendly event, they come together and discuss about all things in life.”

Such a come-together is also referred to as a Kung Fu ceremony, which in this context means “quality time” for yourself, rather than the martial art.

And quality time is just what we need in our busy lives, surely?