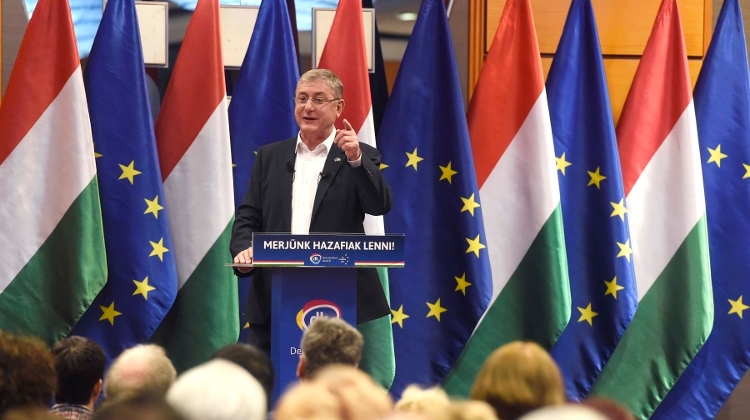 The first part of DK’s proposal calls for the repeal of the labour code amendment passed last December. Gyurcsány argued that people who are forced to work ten hours a day six days a week would not be too keen to have children.

Families with small children must be guaranteed, he said, that they will not be evicted from their homes. Further, caregiving should be officially recognised as employment and caregivers should be paid at least the minimum wage.

Gyurcsány also called for raising family benefits by 50% with immediate effect and for vacant general practitioner and paediatric practices to be filled.

Further, the wages of health-care workers should be raised by at least 50%, he said. The wage increases should continue over the next four years, with wages rising by at least 15% every year, Gyurcsány added.

The former prime minister also called for creating the conditions for schools to provide modern education and language skills.

Tuition fees should either be lowered or scrapped entirely and the number of students higher education institutions can admit should be increased, he added. He also said basic utilities should be made free for everyone up to a certain consumption level.

Ruling Fidesz said in reaction that Gyurcsány’s “real programme” involves supporting the settlement of migrants instead of families with children.

Gyurcsány is attacking the government’s family policy because he is a “pro-migration” politician, Fidesz said in a statement. He has refused to vote in support of increasing home-care fees, the introduction of home-care for children and all home creation support but when in power, he discontinued three-year child benefits and introduced austerity measures and raised taxes, it added.

The co-ruling Christian Democrats (KDNP) said Gyurcsány was “simply unable to accept that his family policy goes against common sense”.

“After taking Hungary’s economy to the brink of bankruptcy during his reign, he would now offer public utility services for free and instead of supporting a work-based society, he would restore a system making families dependent on benefits,” KDNP said in a statement.