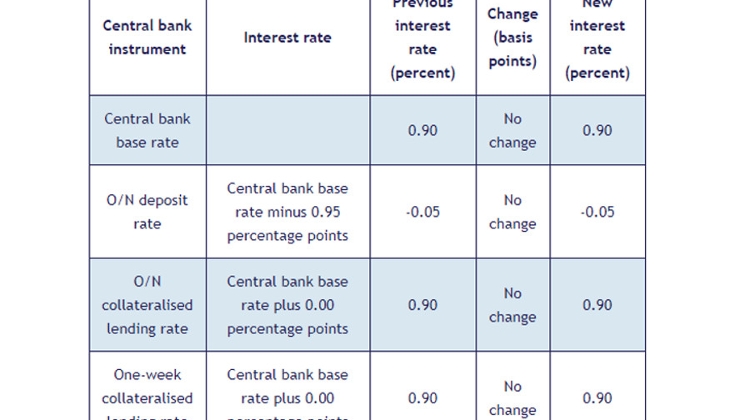 The Monetary Council of the National Bank of Hungary (NBH) left the central bank base rate and overnight deposit rate unchanged at 0.90% and -0.05%, respectively, at a monthly policy meeting.

The Council also left the rates on hold at the previous policy meeting.

At a meeting in March, the Council raised the overnight deposit rate by 10 basis points, marking the first policy tightening in years.

Since the crowd-out target was cut, stock of the central bank’s FX swaps has fallen by some 263 billion forints. However, the level of FX swaps remained practically flat after the latest couple of weekly tenders.

In a statement released after the meeting, the Council reiterated guidance issued after policy meetings in March and April.

The Council said inflation “will fluctuate around” the 3 percent central bank target in the coming quarters, while the measure of core inflation excluding indirect tax effects - an indicator of underlying inflation - is “expected to continue to rise until the autumn months and then to decline from the end of 2019”.

It noted that “persistently buoyant” domestic demand is boosting the pace of price increases, while weakening external activity is restraining that pace, and said it would assess the effects of this “dichotomy” on the maintenance of price stability over the 5-8 quarter horizon of monetary policy.

"The monetary policy stance will continue to be accommodative, economic agents’ financing costs will remain favourable,” the Council said, adding that it applies a “cautious approach” to policy decisions and relies “mainly” on the macroeconomic and inflation projections in the NBH’s quarterly Inflation Report.