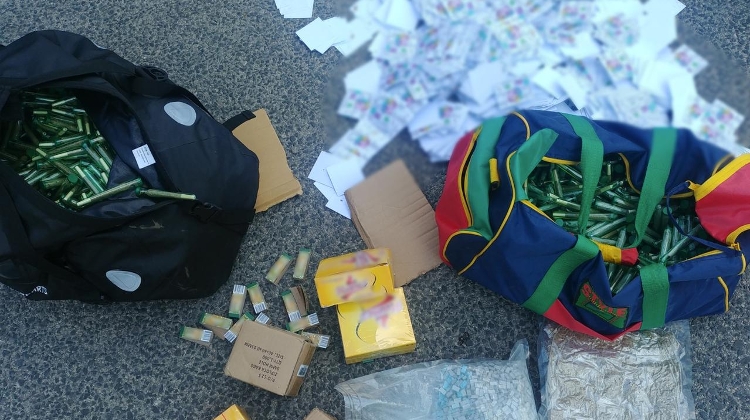 Police arrested two Dutch men after they seized the largest quantity of illegal drugs ever discovered at the Sziget Festival.

Traffic was unusually high at one of the tents pitched on the festival grounds, and this caught the eyes of some security guards.

They also noticed that people arrived with cash and left with small packages. They then notified the police.

The two young men – aged 21 and 22 –held more than Ft 5 million worth of drugs and had an extensive price list of the products they sold, advertising ecstasy pills for €15, a gram of weed for €25, and a pre-rolled joint for €15.

In their tent and in their luggage lockers police found and confiscated, 2,700 ecstasy pills (roughly 1 kg), 128 g of pre-portioned suspicious plant debris (a.k.a. marijuana), marijuana cigarettes in 451 plastic vials, and pouches used for drug distribution and trade.

A court decided that the two suspects should remain in custody, due to the large quantity of drugs in their possession.

The story continues. Hvg reports that among the two men’s luggage, police found a set of car keys, but the dealers refused to tell where their car was.

After making the initial bust, police managed to find the dealers’ car which had 17 kg of drugs inside, including 15 kg of marijuana cigarettes and almost 4,000 ecstasy pills.
The Dutch men's car was reportedly parked in Budapest's 3rd District on Reményi Ede street.

Altogether, the two Dutch men stashed 310,000 Euros worth of drugs, which corresponds to 20,000 doses of drugs.

One of the alleged dealers is reportedly a rising star in the running world, 21-year-old Roelf B, who represented the Netherlands at the European Championships Under 23 last month as a sprinter.

He won’t be able to run away from his Sziget mess, as he and his 22-year-old 'business partner' now face the possibility of life in prison if Hungary brings charges of 'drug-trafficking' against the dealers. In case the charge is downgraded to 'drug-dealing' they’ll be looking at a maximum sentence of 8 years in a Hungarian jail.