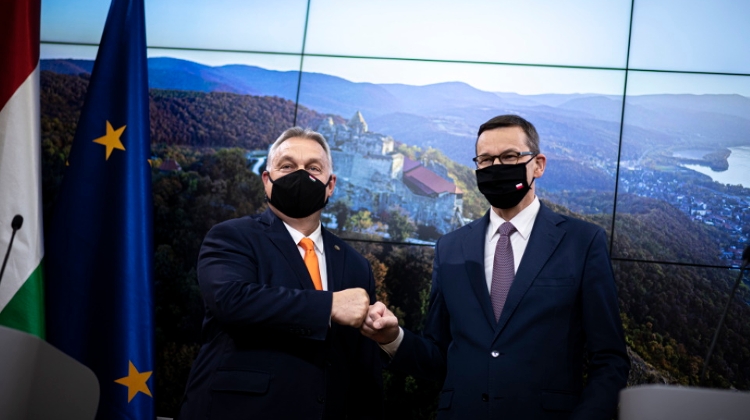 Regarding the debate on the European Union’s multiannual budget and its coronavirus recovery package, Gergely Gulyás said Hungary had conducted “intense negotiations” with Polish Prime Minister Mateusz Morawiecki and the EU’s German presidency.

He said the talks were successful, resulting in an agreement that was acceptable to Germany while fulfilling all Hungarian and Polish demands.

The Hungarian government “has a good chance of victory” at the European Union summit starting on Thursday, where the heads of state and government may unanimously approve a document which includes conditions set out by Poland and Hungary, he said.

Gulyás said the government’s aim had been clear throughout the talks: EU support must not be made conditional on rule-of-law criteria.

He added that now was not the time to resolve ongoing debates over migration, and these disputes must not be linked to the budget. He said Hungary had made clear that it cannot be “blackmailed on these issues”.

The government demanded political and legal guarantees to ensure that Hungarian voters’ decisions are not disregarded, he added.

Referring to the EU’s migration action plan, Gulyás said Hungary would reject, at all costs, the EU hosting 34 million migrants.

Gulyás said that as long as the debate was ongoing, the government would prevent the budget and the recovery fund from being used to “back Hungary and Poland into a corner”.

Hungary is committed to using EU funding transparently and to fighting corruption, he said. At the same time, Brussels must not be allowed to strip governments of their sovereign competencies, he said.

The draft agreement contains all requests made by Hungary and Poland, and guarantees that those countries cannot be blackmailed on the issues of migration or gender policy, he said.

Zoltán Kovács, the state secretary for international communications, told the news briefing that the government was awaiting a decision at the EU summit today that would hopefully obviate the need for Hungary and Poland to wield their vetoes of the European Union budget.

“We suspected right from the start that some frugal countries might not want this agreement and would only use the central European countries’ rule-of-law issue as an excuse, so the truth will now emerge,” he said, adding that Hungary had acted in the spirit of solidarity by giving its approval to the recovery fund which requires taking out a loan.

Gulyás said the draft agreement that Hungary and Poland had hashed out with the German presidency included all key guarantees.

“We have every right to say that, in this case, the Hungarian and Polish position has prevailed,” Gulyás said, adding that thanks to a staunch willingness to compromise, a document had come about that included all guarantees required by the two countries.

Commenting on the preparation of operative plans required to draw money from the European recovery fund, he said the government’s aim was to “invite many tenders without delay” in early January, adding that the launch of as many large EU projects as possible was an important means to manage the crisis.

Foreign Minister Péter Szijjártó said in a video on Wednesday that Hungary had “won” the debate.

“We won because we fought for the national interest,” Szijjártó said. “Brussels would have decided otherwise that we must accept illegal migrants or be stripped of EU monies,” he said.

Justice Minister Judit Varga said it had been proven that “it is worth fighting for Hungary’s interests always and in every situation”.

“It has been worth fighting so that (EU) subsidies are not tied to ideological requirements amid a pandemic,” Varga said on Facebook.

According to Varga, the agreement is in line with the EU treaties, “it respects our national identity and provides protection against political blackmail”. “We have won! The friendship of Poland and Hungary has won!” she said.