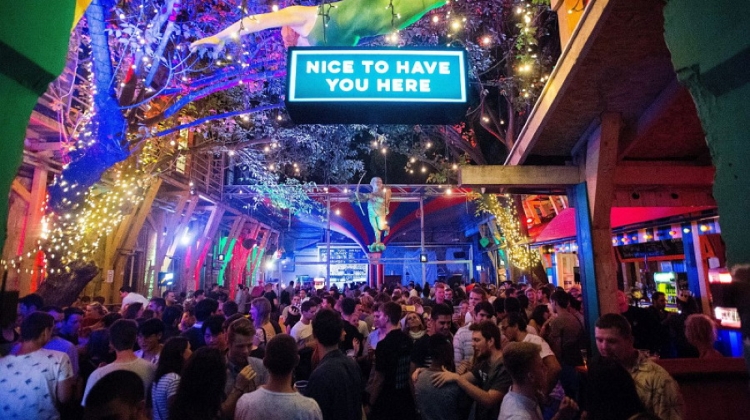 Budapest’s 'Party District', a quarter of Erzsébetváros in District VII with zany bars, beer gardens and restaurants that pre-coronavirus throbbed 24/7, is very slowly coming back to its former boozy, buzzing self. But not all are happy with the renaissance; for some the lockdown provided much welcomed relief.

When British retirees John Bienias and Karen Culver moved into the inner part of Budapest’s District VII in 2007, part of the attraction was the cool, bubbling night life to found in the various off-beat “ruin pubs” and restaurants that had been proliferating since the turn of the Millennium.

“When we moved here in 2007, this was a slightly Bohemian district with some good bars and restaurants and a pleasant, lively atmosphere.

Szimpla Kert, just opposite us, was still just a ruin bar visited mostly by Hungarians and our neighbors were mostly long-term Hungarian residents. We were very happy here,”

With Szimpla Kert, which lays claim to being the most iconic, eclectic ruin-pub plaza of them all, the couple were well placed to enjoy the thriving local art and cultural scene, including its long-established Jewish heritage.

But the couple say things began to get out of hand some five years ago, particularly when stag parties from Western Europe discovered that, for relatively modest prices of food and victuals and Airbnb accommodation, they could gorge and booze themselves legless – though rarely voiceless – into the dawn hours.

On top of this, drug dealers regularly stood at their building entrance, openly plying their illicit “trade”, with prostitutes and pimps gathered further down the street.

“Up to the pandemic, the number of tourists and, especially, stag parties has grown to the point where the street is so crowded, and the behavior so bad, that it is no longer a fit place for human beings to live,” Bienias said.

Indeed, the noise, dirt and hassle became so intolerable that the couple are moving out to a quieter part of the city. They are not alone.

Mayor of District VII Péter Niedermüller admits that the growth of the hospitality industry in Erzsébetváros has “caused a lot of different kinds of conflicts between the people living in the district, and the tourists,” with many people who have lived many decades in the area moving out, often tempted by high prices for their ageing flats in need of renovation.

Elected last October with a manifesto that promised to reduce the negative effects of the hospitality industry on the local population, Niedermüller is a member of the center-left Democratic Coalition.

He says the council “would like to change a little bit the character of this party district, [….] to try to transform the district into a kind of cultural district to show [...] that it’s not the only way to come to the district and to drink as many beers as you can, but to be involved in the history, culture and traditions.”

The mayor says he has moved to tighten regulations and by-laws of the district’s entertainment sector and reduce late night noise, while stressing that he does not wish to “kill” the Party District.

Moreover, he says he is seeking to negotiate a consensus not only between the various stakeholders, namely the hospitality sector, general population and council in his own district, but also in the neighboring districts in downtown Budapest. At the same time, he admits progress is slow “because there are a lot of interests” to accommodate.

Dóra Garai, an independent councilor representing the local pressure group Élhető Erzsébetváros (Let Erzsébetváros be Livable), is frustrated with the reform of regulations nine months into the district council’s mandate.

“The new regulations do not address a lot of problems. The biggest problems are caused by the high-capacity discos and techno clubs within housing buildings. These attract crime, vandalism and cheap party tourism to our district,” she told the Budapest Business Journal.

On top of this, Niedermüller has eased restrictions on how late pubs and restaurants may serve terraces to beyond 10 p.m., the previous limit.

“How does that help reduce evening noise levels?” she asks, “A lot of the new regulations actually favor the big clubs,” she says, claiming the various political parties involved are looking to win votes from businesses for the 2022 national elections.

And with tourism once again beginning to pick up, she maintains that with “no authorities on the streets” at night “drugs and prostitutes are back.”

Niedermüller insists he has “zero tolerance” for drug trafficking and prostitution, but admits that, while there is cooperation with the local police force (which is controlled by the state, not the municipality), there are too few officers to enforce the law properly in the district.

Meanwhile, inside Szimpla Kert one July afternoon, there appears little evidence of a revival of tourism, with perhaps two dozen customers scattered among half a dozen bars.

“It will get better later on. On Friday, Saturday, it’s better. Now it’s maybe 25% what it was [before the virus],” Mati, the barman at the Shisha, tells the BBJ while preparing for the evening trade.

An old hand, with 10 years’ experience selling drinks and hiring out shishas, or hookah pipes, Mati says once television news stops talking about COVID-19, the tourists will come back.

And with foreign tourists making up 95% of his customers, that can’t come soon enough.

He dismisses allegations that the ruin pubs created noise preventing locals from sleeping. “We have music, but we keep it inside,” he says, waving his arms towards what presumably passes for sound insulation.

Mati equally rejects allegations of rowdyism at closing time, when customers hit the street at 4 a.m.

Ah, sometimes they are noisy a little bit, but when they drink a bit more, they are silent,” he laughs, before letting me into his big secret. “I think there is a medicine against the virus,” he says, wide eyed.

Your correspondent listens, dutifully, for the scoop of a lifetime. “It is Hungarian pálinka! I drink one in the morning, I feel good, another at lunch, and another at night. I’ve been doing this for maybe five months. It’s 60% alcohol, then there is no virus.”