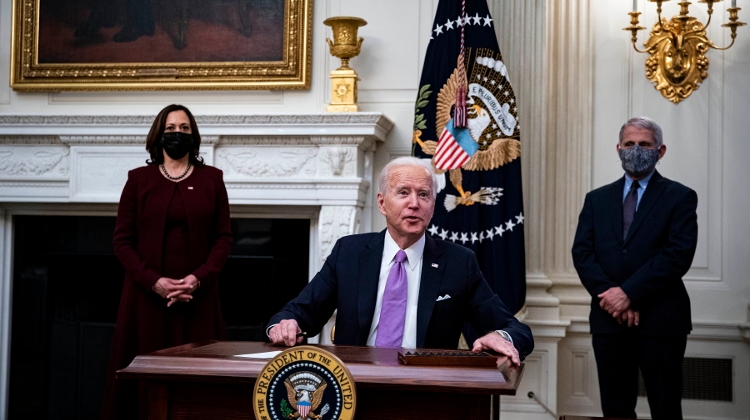 Foreign Minister Péter Szijjártó has sent letters of congratulation to three incoming secretaries of the new US administration of President Joe Biden.

In his letter to Antony Blinken, the new Secretary of State, Szijjártó said the United States was Hungary’s most important ally and strategic partner outside the European Union, adding that Hungarian-US relations had progressed, reaching new heights in recent years.

Szijjártó said he was convinced that “the current exceptional relationship provides both countries with the best framework to face the new challenges arising from the pandemic situation, as well as to further strengthen the transatlantic relationship, which is vital to the security of Europe”.

“This year Hungary and the United States will celebrate the 100th anniversary of the establishment of diplomatic relations.

On this grand occasion, I especially look forward to fostering the bilateral ties between our two countries.”

Szijjártó said the Hungarian government is looking forward to cooperation with the US based on shared values, mutual interests and mutual respect between the two nations, and he personally would work towards promoting political, security, economic and cultural cooperation.

In the context of foreign policy, Szijjártó stated Hungary’s continued support for the US and Israeli efforts to bring about sustainable peace in the Middle East and fight against anti-Semitism in Europe and elsewhere in the world.

He said that as a long-time supporter of the EU accession of the countries in the Western Balkans, the government also welcomes US efforts to promote peace and prosperity in the region.

He said Hungary had made significant efforts to boost its defence spending over the past few years, and the 2% target is expected to be hit by 2024 at the latest.

He further noted that the country has increased the proportion of defence investment well above the 20% threshold, adding that several bilateral agreements promote military partnership between the US and Hungary.

As regards economy and trade, Szijjártó said partnership in those areas has progressed significantly in the past years. He noted that there are 1,700 US companies employing around 106,000 employees in Hungary with bilateral trade growing by an annual 2.3% to 5.8 billion dollars in 2019.

He pledged to work closely with the new US administration to identify additional areas of economic and business cooperation, and he expressed hope that he would have a chance to meet the new state secretary in person as soon as possible.

In his letter to Gina Raimondo, Secretary of Commerce, Szijjártó said that the Department of Commerce would play an essential role in post-pandemic economic recovery.

He said that Hungary highly valued the successes the two countries had achieved in bilateral trade in recent years and would continue to seek possibilities for further cooperation. “Maintaining strong ties with our global economic partners such as the United States will always be a priority for Hungary,” he said.

In his letter to Jennifer Mulhern Granholm, Secretary of Energy, Szijjártó said that US-Hungarian cooperation in the field of energy had improved considerably over the past years.

He stated the Hungarian government’s commitment to fight climate change, and underlined the importance of renewables and enhanced role of nuclear energy.

“I am convinced that we will find ample common ground to enhance our cooperation in the field of energy, based on mutual respect and cooperation,” the foreign minister said.