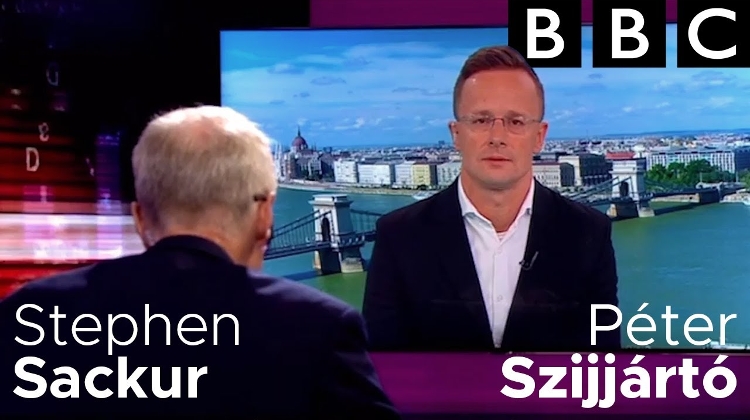 Hungary is under “continuous attack from Brussels, whatever we decide, European institutions find a way to put some pressure on us and to blackmail us so we change our decisions and not use national competencies,” Foreign Minister Péter Szijjártó said in an interview with BBC.

Hungary is ready for dialogue with the EU but will not enter into “debates based on stereotypes,” Szijjártó said.

Current debates are focusing on the future of Europe, Szijjártó said.

The EU institutions are “federalists”, working to create a “United States of Europe which we definitely oppose”, he said.

Hungary’s approach, “currently in minority”, proposes that the European Union is necessary but should be based on strong nation states, he said.

Hungary therefore wants national competencies to be kept in the hands of the nations. “Our goal is to make [the] European Union stronger,” he said.

“We are definitely not going to change our approach” on specific policy issues which heads of certain member states have said went against the EU’s core values, he said. “These are all politically motivated perceptions,” he said.

“We are a conservative, Christian Democrat, patriotic government with a very stable background in parliament and the society,” Szijjártó said. Such a strong mandate allows very little external interference from outside the country, he said.

Regarding the EU’s recent report on the rule of law in Hungary, which saw “risks of clientelism, favouritism, nepotism in public administration and risks arising from the links between business and political actors”, the foreign minister said the document was “a politically motivated, biased, unbalanced, unfair, blackmailing type of document”.

The EC is using the funds for blackmail and to gain influence over issues that are clearly in the hands of the member states, he said.

Threatening Hungary with withholding those funds because of policy issues is “unacceptable”, he said. However, Hungary will be able to boost its post-pandemic performance and produce substantial GDP growth by the end of the year even without the recovery fund, he said.

Regarding Hungary’s child protection law, which the European Union has slammed as discriminatory against the LGBTQ community, Szijjártó said the law banned NGO activists from talking about sexual orientation in kindergartens and schools “without our knowledge and consent”, leaving sex education in the hands of experts.

He said he was “sure” the Hungarian law fully complied with European regulations. The referendum recently announced on the subject will give an opportunity to Hungarians to express their views on the topic, “and everybody will have to respect that.”

In response to a question on press reports that some 300 Hungarians have been wiretapped using Pegasus, a software developed by Israeli company NSO, Szijjártó said the Orbán government “has not monitored or wiretapped anyone illegally” since it came to power in 2010.

No one was wiretapped just because they were “not friendly” with the government, he said.

Regarding Dutch prime minister Mark Rutte’s remarks on Hungary “not having a place in the EU”, Szijjártó said Rutte “hates Hungary”.

“Hungary will continue to be the member of the European Union and work on a strong EU,” he said.