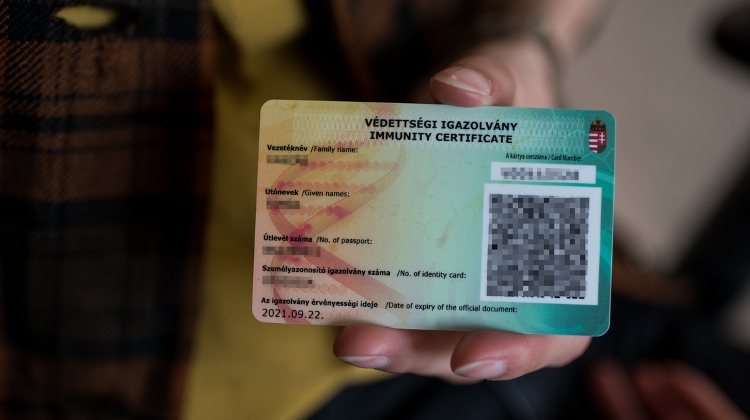 Hungary’s government will extend the validity of coronavirus immunity certificates for those who have received two vaccine doses until May 1, in line with the practice adopted by European Union countries, the prime minister’s chief of staff said.

Neither Brussels, nor any EU member state have tightened rules on immunity certificates due to the emergence of the Omicron variant, and the government does not want to put Hungarian citizens at a disadvantage compared to their EU peers, Gergely Gulyás told a regular press briefing.

Earlier, the government had planned, from February 15, to limit the validity of immunity certificates in Hungary to people who had their second Covid jab no more than six months earlier or had their booster jab.

Meanwhile, citing virologists, Gulyás said the fifth wave of the pandemic had reached its peak in Hungary, and case numbers were expected to decrease at the same rate that they had peaked.

Though the spread of the virus has been significantly faster in the fifth wave, neither the number of hospitalisations, nor the death toll has been anywhere near as high as during the previous waves, he said.

Asked about coronavirus vaccines, Gulyás called it “harmful” that EU authorities, including the European Medicines Agency (EMA), had not authorised either Russia’s Sputnik V, which he said had been shown to offer “the best possible protection”, or China’s Sinopharm which has been approved by the WHO. “Until they do so, we cannot speak of full equality,” he said.

Concerning the campaign activities of Péter Márki-Zay, the united opposition’s prime ministerial candidate for the April parliamentary election, Gulyás said “his remarks are offensive to various communities”, adding that “his hate-mongering is unacceptable”.

“Brussels would no doubt hit the jackpot with an opposition victory because it would pave the way for the implementation of its migration plan, allow the utility bill reduction to be scrapped and thwart the promotion of Hungary’s national sovereignty,” he said.

If an opposition government scrapped the utility programme, it would increase each household’s annual expenditures by 500,000 forints (EUR 1,400), he added.

Answering a question about European post-pandemic recovery funds, Gulyás said “Brussels would not sign an agreement during the election campaign”, adding that “they will have to come to an agreement with the incumbent government if Fidesz wins the election”.

The funds, he said, included some 300 billion forints for health developments, which the government wants to launch as soon as possible.

Gulyás also noted concerns raised by Didier Reynders, justice commissioner of the EU, concerning the transparency of the upcoming election, saying that “all observers are welcome”. He added that the government had invited OSCE monitors to observe the vote.

Referring to press reports suggesting that Marine Le Pen, head of the French National Rally, has been granted a loan by a Hungarian bank, Gulyás said he was not aware of such a transaction, but added that “it could be good business for any bank in the EU” in view of French regulations under which parties running in the presidential election will be reimbursed their campaign costs from central coffers if they garner a minimum of votes.

Asked in connection with a corruption scandal involving the head of the branch of bailiffs and a former state secretary if the rules governing public officials’ asset declarations should be reviewed, Gulyás said he hoped that “the vast majority” of MPs gave a realistic picture of their finances in the declarations. He added that Pál Völner, the former state secretary in question, did not have to return his parliamentary mandate until he was proven guilty.

“Until then, he can decide whether to leave or stay,” Gulyás said. Answering a question, he said there was no evidence “even to suggest” that Antal Rogán, the prime minister’s cabinet chief, could be implicated in the scandal.