'Our Greatest Win, Even When Everyone Was Against Us', Says PM Orbán 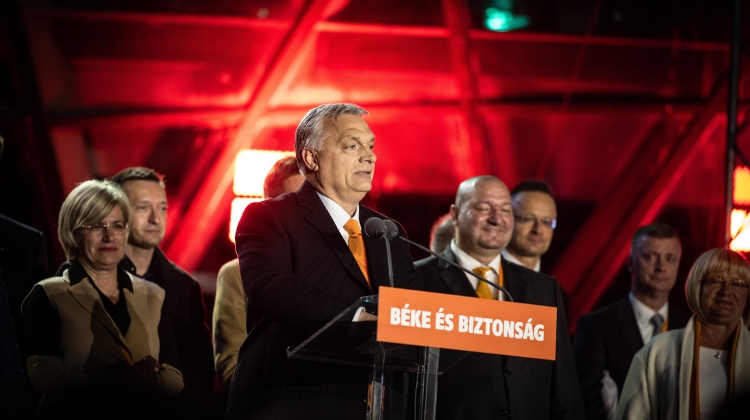 Prime Minister Viktor Orbán declared that ruling Fidesz had secured its greatest victory even when “great international forces” had mobilised against it. All the money international organisations provided to the Hungarian opposition was “money down the drain”, he said.

Referring to financier George Soros, Orbán said “the Hungarian left is Uncle Gyuri’s worst investment; they have done nothing but take money for twelve years.”

Over the past twelve years the Fidesz-Christian Democrat alliance scored all kinds of victory, he said. Back in 2010 it triumphed in the old, two-round election system. Four years later it repelled the challenge of opposition parties fighting separately.

In 2018 it defeated a partial alliance of the opposition forces, and now a totally united opposition, Orbán said. All tactics, scheming and trickery is in vain — it is the heart that prevails at the end of the day, he said, adding that “Hungary’s victory tonight was the victory of the heart.”

“We’ve protected Hungary’s peace and security; we’ve protected its independence and freedom,” Orbán said. Referring to the referendum on child protection, he added: “Although the final results are not known yet, I trust we’ve also protected our children and families.”

“Never before have we had more opponents,” Orbán said, listing “the international left wing around us, Brussels bureaucrats, all the monies and organisations of the Soros empire, the international mainstream media and, finally, even the Ukrainian president”.

Orbán said: “Not only do we have opponents all over the world but friends, too, who made every possible effort for this victory.” He said the election win was also that of “our US friends, the Poles, the Italians, the Spanish, the Serbs, the Slovaks and the Austrians.”

“We’re sending the message to Europe that this is not the past, this is the future,” he said.

“This will be our shared European future.” “The whole world can see that Hungarians love their country,” he added. “We who have won tonight commit to always putting Hungary first,” Orbán said.

Orbán also reassured ethnic Hungarians in western Ukraine’s Transcarpathia region that the motherland was “with them”, telling them to “hang in there” and not to be afraid.

Péter Márki-Zay, the prime ministerial candidate of the united opposition, conceded to Fidesz. “I’m stunned just like everyone else,” Márki-Zay said at the City Park Ice Rink in Budapest.

“I don’t want to hide my disappointment and my sadness; we would never have thought that this would be the outcome.” Márki-Zay said the conditions in the election were “extremely unequal”, adding, however, that the opposition was not disputing the result, “only that it was a democratic and free race”.

Lászlo Toroczkai, the leader of Mi Hazánk, hailed his party’s achievement in securing seats in parliament, saying: “The miracle has happened; this is the first step in saving Hungary.” Toroczkai, who is the mayor of Ásotthalom on the Hungarian-Serbian border, said Mi Hazánk had worked “against an unprecedented headwind”, citing Facebook’s move to suspend the party’s page days before the election.

The Centre for Fundamental Rights think-tank said Sunday’s election was an “outstanding event” in the history of post-Communist Hungarian politics. The referendum on child protection held simultaneously with the ballot is expected to be valid and successful, the think-tank said.

The election and the plebiscite “have shown that Hungarian democracy is robust,” it added. Hungary’s legal framework “is stable and provides proper guarantees against foreign attempts at interference and internal abuses, and could maintain the election’s integrity.”

The referendum on child protection held in parallel with the election contained four questions.

To the question: “Do you support children in public schools participating in classes demonstrating sexual orientations without parental consent?” 4,489,977 responses were given, with 1,314,726 spoiled papers. Of those who gave valid responses, 2,788,951 indicated ‘no’ (92.39pc).

To the question: “Do you support media content of a sexual nature and affecting the development of children being presented to them without any restrictions?” 4,490,711 responses were given, with 1,347,895 spoiled papers. Of valid responses, 2,847,858 indicated ‘no’ (95.37pc).