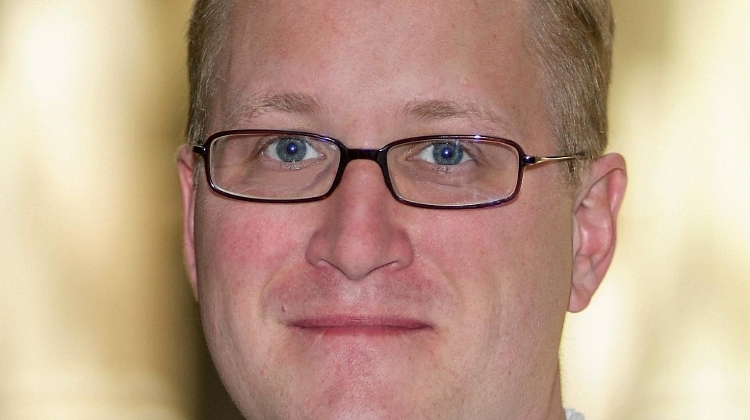 US-born Liam Crow grew up in NJ but spent most of his professional career as an option trader/market maker at the Chicago Board of Trade and Chicago Board Options Exchange in Chicago.

After hanging up his trading coat in 2003, Liam chose to pursue a Master's degree in business administration at Corvinus University, where he graduated with top marks in 2005.

He is an offshore financial adviser for Capital Growth Solutions helping local expats with savings and investment plans. He has been spending much of his recent time helping clients come to grips with the current financial crisis and how to make the most of it.

In his spare time Liam likes to cook for friends, explore the woods around the city, participate with the Budapest Hash House Harriers, and come up with new excuses why his Hungarian is so poor.

1. When did you arrive in Hungary and what brought you here?
I came to Budapest in 2003 to get a masters degree at Budapest University of Economic Studies and Public Administration (Közgáz Egyetem). I really wanted to study in an international environment and Budapest offers what I think is one of the best locations and environments in Europe. Being taught by actual professionals instead of just academics was a huge plus.

2. Have you ever been an expatriate elsewhere?
I lived for a bit over a year in Beijing, China in the early 1990s. As you can imagine it was a much different experience then Budapest. I was trying to learn Chinese and afterwards I rode the trans-Siberian rail and visited Eastern Europe for the first time. I was here for the festival of the leaving of the Soviet soldiers and saw Frank Zappa perform shortly before he passed away

3. What surprised you most about Hungary?
The drivers, they surprise me every time I step off the corner. Sorry, every green light does not mean a new race.

4. Friends are in Budapest for a weekend--what must they absolutely see and do?
Szechényi thermal baths, Terror Museum, right hand of St. Steven, City Market Hall, eat at Lucas or Vista Café, and some drinks at Szimpla Kert or West Balkan. If there is enough time a trip to Daubner for some of the city?s best pogácsa.

5. What is your favorite Hungarian food?
There is much that I do like so I will just have to pick something in the top 5. So I might say that is a great restaurant close to Moszkva tér called Trombitás. They have the best gulyás in the city.

6. What is never missing from your refrigerator?
Not so much from my fridge but I can?t live without Tabasco. I have a few restaurant sized bottles floating around my apartment. Almost everything gets better with Tobasco.

7. What is your favorite Hungarian word?
I think this is a family website, sometimes my Hungarian is a bit salty. Otherwise it?s ?ugyanaz?, it says so much, plus you don?t really need to think. Animal names like ?jegesmedve? and ?vizilo? are nice too.

8. What do you miss the most from home?
Without a doubt, I miss having a BBQ grill and some good steaks to grill on it. Since I was living in Chicago before coming here I would also have to say being able to grab some Mexican food is well up there. I can find almost everything else I need around the city in one form or another.

9. What career other than yours would you love to pursue?
If I could get a job traveling around the world exploring cool sites which are off the beaten path exotic food I would be more than happy. That would be excellent job.

10. What's a job you would definitely never want?
Being one of those parking inspectors who ticket and boot cars around the city would not be fun job. I don?t even have a car but I can?t help wishing pain and suffering on them for the job they do. Being the current PM would not be a pleasurable job.

11. Where did you spend your last vacation?
I went to Beograd for a few days during the summer. I think its one of those places which, thankfully, people still have a lot of misconceptions about so they stay away from it. Its actually quite modern and Serbian can be quite hospitable. Having gigantic hamburgers and cevapcici for really cheap is not a drawback either.

12. Where do you hope to spend your next one?
If you were buying the ticket I would say Santiago or Buenos Aires. I have never been to the southern hemisphere. It might not be so bad a bad place to kick off a long trip. If I was paying it would have to be a bit more local. Maybe a long train ride to Kiev.

13 What was your favorite band, film, or hobby as a teen?
When I was 13 or 14 I really got into Led Zeppelin and Pink Floyd. I would listen to them day and night. I had posters, shirts, albums; too bad I would never be able to see either of them live. I guess at the end of the day its more respectable than saying I sat around listening to Rednex?s ?Cotton Eye Joe?.

14. What can't you resist?
Telling a really bad joke. ?Two cannibals are eating a clown. One says to the other, ?does this taste funny to you???

15. Red wine or white?
Red in my mouth but white on my shirts or couch

16. Book or movie?
A novelized movie.

17. Morning person or night person?
I am more than happy to be up early in the morning. Could have something to do with 7 years of waking up at 5am for work; much less fun than it sounds.

18. Dog person or cat person?
Dog, but not those little lap dogs.

19. Buda side or Pest side?
I never really spent much time in the Buda side so a bit hard to answer.

20. What would you say is your personal motto?
If I was to have one I guess it would be this: ?When you die, if you get a choice between going to regular heaven or pie heaven, choose pie heaven. It might be a trick, but if it's not, Mmmmmm?