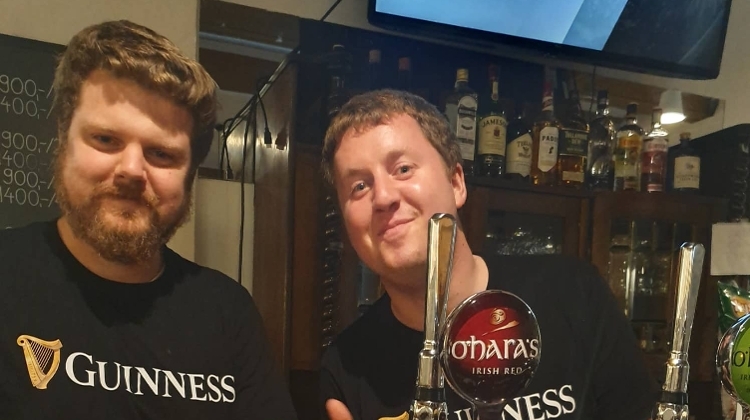 Tim is an Irish-American expat living in Hungary since 2010. He has been in a variety of jobs, including but not limited to: Principal of an International school in Budapest, owning a pub, teaching primary all the way to secondary level,14 years, construction, customer service and military contractor.

He lives here with his wonderful Hungarian in-laws in the 22nd district, and with his wife, Dora, and 5 year old son Lucas.  He loves reading, good movies, Hungarian food, and chatting with his customers in Davy Byrne's.

Brian hails from Kildare, and has been teaching and working with primary age children for quite some time.  He has worked at a couple of different international schools here in Hungary, where he moved with his wife Eszter, who is Hungarian, in 2015, from his teaching career in London.

1. When did you arrive in Hungary and what brought you here?
Timothy first arrived in Hungary in 2006, after graduating from a military college in the United States, to teach Military and Conversational English at the Zrinyi National Defense University.  He returned in 2010 with his wife, to leave here permanently.  Brian first arrived to live in Hungary in 2015, with his wife, becoming a teacher at an international primary school here in Budapest.

2. Have you ever been an expatriate elsewhere?
Timothy has only lived for long periods of time in Hungary and the United States.  Brian has lived as an expat in Australia, England.

3. What surprised you most about Hungary?
Timothy would say that he is pleasantly surprised everyday with the amazing ingenuity of the Hungarian people, and their hospitality.  Brian mentions that he was surprised at how deep and rewarding life is both in Budapest, and Cegléd, where his wife is from.

4. Friends are in Budapest for a weekend - what must they absolutely see and do?
Timothy says that they must see the Buda Castle, an Escape room or two and some typical Hungarian restaurants.  Brian says they should see the Parliament by boat and take a walk in the Buda hills.  They both agree they should come down from their thirsty work for a pint or a cider at Davy Byrne's Pub, Jokai u. 4, Budapest 1066.

6. What is never missing from your refrigerator?
For Tim is always having something spicy or hot to put on whatever he is eating.  Brian says it’s not in his refrigerator, but rather in his kitchen cabinets, a pack of Taytos of course!  (The only place you can get Taytos in Hungary is Davy Byrne's Pub!)

8. What do you miss the most from home?
Tim misses big, juicy steaks the most and Brian misses Irish pub culture.

9. What career other than yours would you love to pursue?
Both Tim and Brian are currently employed as teachers for their day jobs, publicans by the evening.  We think those two current career options occupy most of our time and don't give us much time to think about switching!  We love to teach, and we love to work at Davy Byrne's!

10. What's a job you would definitely never want?
Brian says a ticket inspector on the metro, Tim agrees.

12. Where do you hope to spend your next one?
Back home in the US or Ireland for the holidays.

18. Which social issue do you feel most strongly about?
We both agree that we could all be doing more to protect the environment.

19. Buda side or Pest side?
Brian lives on the Pest side, Tim on the Buda side.