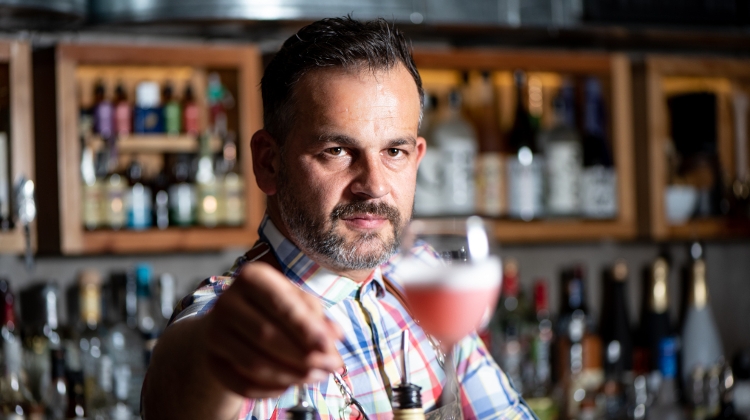 He has a Master degree in Agricultural Sciences, speaks five languages perfectly, in three others has basic degree. He has been actively involved in hospitality for twenty years and has been organizing and holding trainings around the world for more than ten years.

Since 2006, he has been teaching bartenders at the LAB- London Academy of Bartenders.
In 2008, he founded Boutiq’Bar with his business partner and Lilla Kocsis. Boutiq’s 3-persons staff consisted of Zoltán, Lilla and Roland Lukács, in the early years.

Since 2016, co-owners of the Barra Mexico Barshow in Mexico. He has been holding professional bartender trainings since 2005 internaly.

He made his international debut in Berlin in 2009 at Berlin Bar Convent , where he presented to the public the pálinka, the Hungarian Brandy and Leaping Frog  an apricot brandy based cocktail made by Tom Bollock in the USA in 1917.

In 2014, he held training for 350 bartenders in four major cities in Poland.
In 2016, more than 2000 bartenders from Russia took part in his training sessions from St Petersburg to Novosibirsk.
In 2018 he added up the distances he had covered by plane around the Earth.
In 2018, his Barometer lecture on psychology at the Kiev Bar Show was one of the most popular.

Too many options too little time for it. I have lived in 4 different countries At the moment we are thinking about Spain and Costa Rica.

My bar, probably and my close friends.

Apart of the obvious sightseeing and of course bars and restaurants I would send them to small baths.

Psychologist but not a shrink , that I do already in the bar. ;-) I would like to explore the intrigued, tangled interpersonal relation web.

Some boring tiresome thing, whatever, but since every job after a while could become monotonous I guess in a short period of time I would love that job to.

Last what? :-) Cannot remember when it was, it has been so long ago...

Probably Italy for a short one and somewhere in South America a long one.

The Adventures of Ford Fairlane ws  an immense cult movie in Hungary around my 90s,
Faith No More as a band and martial arts as a hobby.

Nothing.  I mean there is no thing I cannot resist. I have developed throughout the years.

I would love to say book, but hardly any time nowadays to read.

All day person, no issues with the bed :-)

Does it matter? Pest.

That I woke up this morning. Sometimes the smallest things matter the most.

Oh I have many I am collective them and I read them from time to time. But here you are one.

The only thing you should be afraid of is not failure, but the endless opportunities  not lived.  - Mr Z