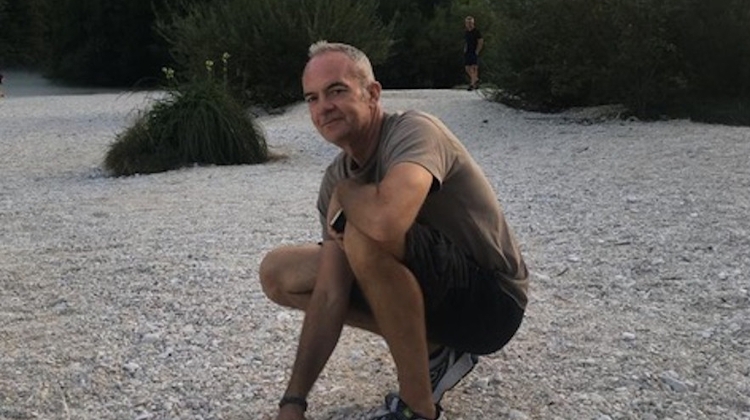 A series of in-depth interviews with some surprising members of the community: Ian Davies, Environmentalist, written by Marion Merrick.

A foray beyond the environs of Budapest to one of the lesser-visited cities in Hungary, offers a glimpse of small-town life that has elsewhere been obscured by urbanisation and a faster pace of living.

On leaving the M5 motorway, the bumpy country roads conjure up reminders of life decades ago: Wartburgs, Ladas and Trabants chug past locals pedalling their old black bicycles, with no helmet or lycra shorts in sight, while the tranquil atmosphere exuded under the trees of Csongrád’s main thoroughfare is redolent of a lazy Sunday afternoon.

Former firefighter Ian Davies, together with wife Edina, bade farewell to bustling Watford in London four years ago, and with their two young children, James and Sofie, moved to Edina’s hometown of Csongrád, which lies on the river Tisza.

In the secluded garden of her grandmother’s house, they relate how their lives have taken a completely unexpected turn and how this now defines their days.

Ian always enjoyed kayaking along the broad Tisza but became increasingly disturbed by the rubbish he found floating alongside him. He began fishing it out, putting it in his kayak and disposing of it once he was back on dry land. Flooding further upstream had caused large quantities of refuse from dumps on higher land to be swept down the river and caught up among the trees and reeds on the banks of the Tisza.

As the Davies’ home is just yards from the grassy dyke which separates their street from the river, the family was faced with this sight on their daily walks and decided they would embark on trying to clear the water. 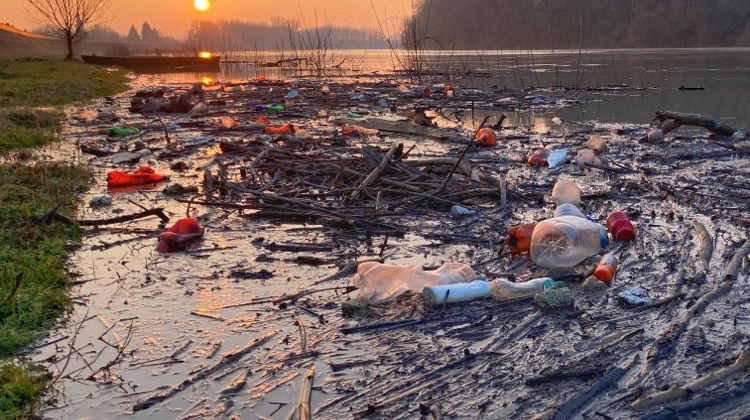 Soon Ian, Edina and their children became a familiar sight, hauling the primarily plastic waste onto the riverbank and stuffing it into bin bags. Neighbours and passers-by started shouting encouragement and thanks, leading Ian to set up the Tisza Tidy Up group on Facebook to enthuse locals to participate.

“It’s primarily single-use plastic we fish out,” says Ian, “it could be carried all the way to Serbia, then Romania, and eventually end up in the Black Sea.” 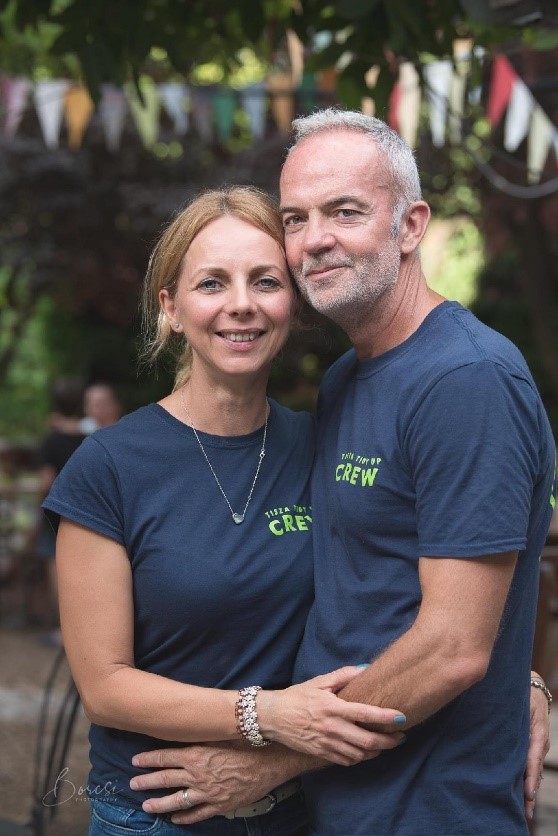 “When we started up, we left the rubbish bags we’d collected for the council to collect, but as the group of local volunteers grew and we gathered more, we were approached by PET Kupa – they’re a large environmental NGO which recycles and repurposes plastic waste.

They taught us to separate the different plastics, and they’ve offered to come and collect it once we have enough stored in our shed here,” says Ian, pointing to an outhouse in the garden.

The Facebook group now numbers 500, and for those taking part in a weekend tidy-up, Ian and Edina hold competitions for the most unusual item dredged up, or for the most beautiful shoe: “We find so many shoes,” says Edina, “but never a pair. And then there are toys, plastic dolls’ legs, Lego…”

“And we’ve found some truly extraordinary things,” continues Ian, “Once we fished out the back bumper of a Dacia car and there was also a large wheelie bin which we’re using at our new house.” More recently, their 9-year-old son fished out a piece of pottery later confirmed to be from the 4th-5th century Sarmata-Hun era.

“Oh yes, and we found a holdall in the mud with a mobile phone and ID inside,” said Edina. Using Facebook, we managed to trace its very surprised owner and return it – he’d lost it years previously!” They have kept some of their finds and created a small mobile exhibition to show what ‘treasures’ come down the river, even setting up at the start line of their local half-marathon.

Edina had plans right from the start to approach schools and introduce more local environmental awareness to the children. As a result of this, they have now had numerous invitations to promote their work and speak about environmental issues to both local children and their teachers. 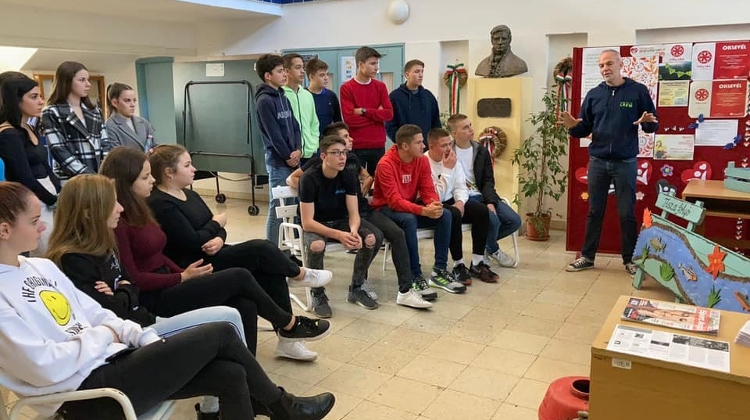 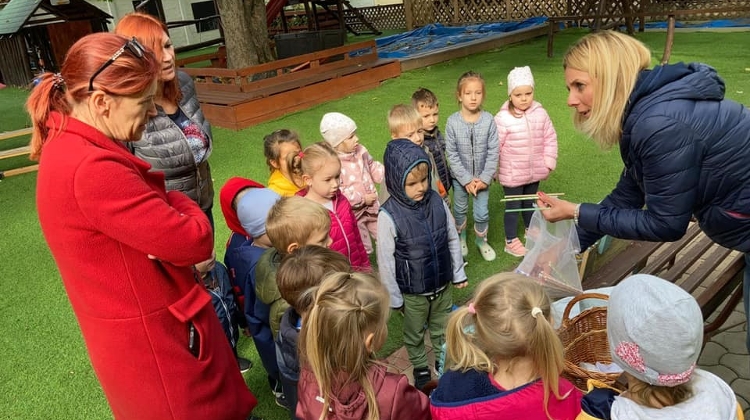 The group has recently acquired a Ladik – a traditional Hungarian fishing boat – and they are planning to make another one themselves using traditional methods which they are still in the process of learning. In recognition of their work in Csongrád, the group was presented with a community award by the local mayor. 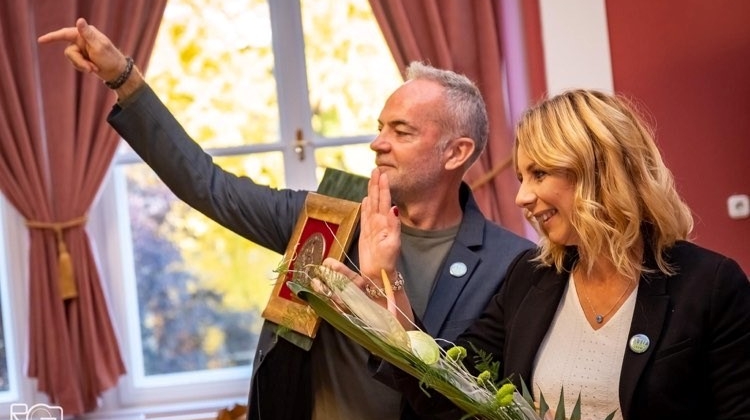 Like many foreigners in Hungary, Ian is still grappling with the language, something that can make it difficult to integrate and feel at home.

Yet, when asked about this he says, “It makes me emotional to say so, but our group has become a real community now, even people who don’t take part know who we are and encourage us in what we’re doing. We are tremendously grateful to everyone who’s joined us and worked so enthusiastically with us.

But people are so friendly here anyway – when we first arrived, our neighbours organised a street party just to welcome us. In fact, I was also given an honorary Hungarian name in a fun ceremony at the pub (Fodor Jani). And the children love our peaceful life by the river with nature all around us, and they’re proud of our work.”

Affixed to the wall of an outbuilding in the garden is a fisherman’s net with a number of bones hanging on it. “My grandfather and my father were both fishermen,” explains Edina, “those are horse’s bones used to weigh the net down,” she adds.

“The Tisza is very important to people in Csongrád, and in cleaning the river and looking after it, I feel I am continuing my family’s connection with it. However small the actions we take as individuals, if everyone just does something, we can make a valuable contribution to protecting the environment.”

Ian agrees. “It’s not a question of whose ‘fault’ all the rubbish is,” he says. “It’s up to us all to do what we can. I never planned to do this when I came here but this area and the river are so beautiful – all I wanted to do is make a difference.” 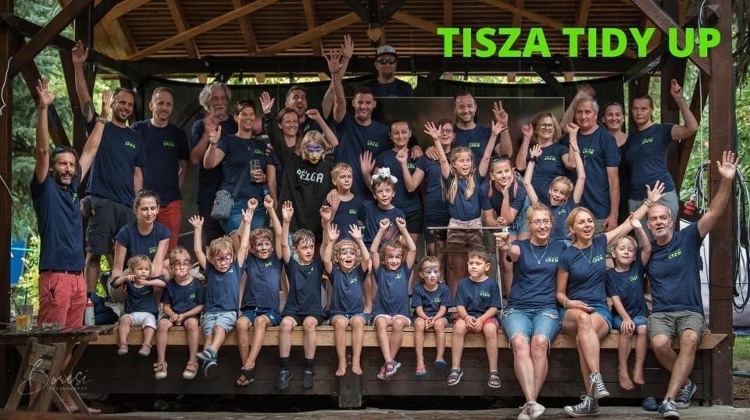