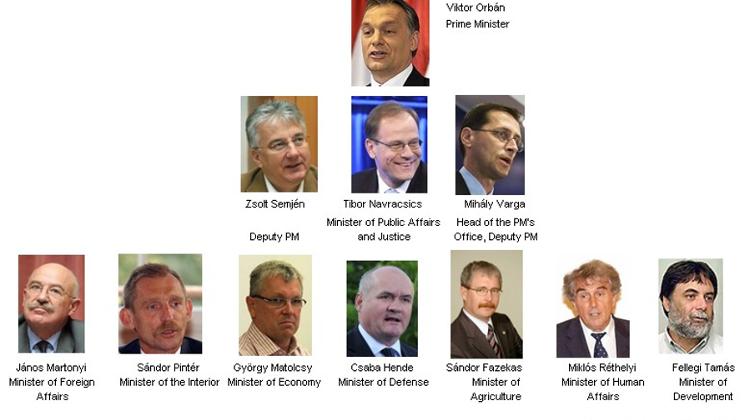 "Hungary’s Prime Minister-elect Viktor Orbán has presented the members of his cabinet to the public. The names match those that have been circulating in the press as the most likely candidates.

Hungary’s new government has started its preparatory meeting in Parliament today. After a meeting behind closed doors, PM-elect Viktor Orbán has disclosed who we lead the ministries. Apparently, the previous press reports about the new ministries and ministers were accurate.

Economy Minister György Matolcsy should "put the economy back on track", Orbán said, noting that he is a "widely known" person, given he had been in the Antall cabinet and in the Fidesz cabinet as well between 1998 and 2002.

The main duty of Foreign Minister János Martonyi will be to conduct Hungary’s EU Presidency in 2011.

Hungary’s new Minister of Asset Management and Infrastructure, Tamás Fellegi is given the task to "protect public assets from oligarchs". Orbán said Fellegi has "appropriate political and scientific experience" to prove that the state can be a "good master".

Minister of Agriculture and Rural Development Sándor Fazekas is needed "to get the countryside back on its feet again" and prove that "the rural area is the source of the future rather than a thing from the past", Orbán said. Fazekas has been an MP for eight years and is also Co-President of the Alliance of Hungarian Municipalities. Fazekas has been mayor of Karcag for 20 years.

Csaba Hende, Minister of Defense, will have to see to it that members of the armed forces are not "constant players in criminal chronicles". Hende had spent more than three years at the Ministry of Defense in the Antall-cabinet.

Orbán said Minister of the Interior Sándor Pintér will have "the toughest job with no time to waste". His task will be to restore law and order and public security as soon as possible.

Minister of Human Affairs Miklós Réthelyi is commissioned with "saving the Hungarian healthcare system and rebuilding social security". Orbán said he is the "most experienced member of the government", with his career going back to the Antall era where he had worked at the ministry of healthcare.

He is the Director of the Szentágothai János Neuroscience Postgraduate School at Semmelweis University (2000 - current) and the Chairman of the Foundation for the Hungarian Higher Education and Research 2001 - current).

He received the Middle Cross of the Hungarian Republic (1996), Research Prize of the Hungarian Academy of Sciences (1991) and Doctor Honoris Causa at Kingston University, Great Britain (1993).

Réthelyi worked and taught in Ukraine, Paris and several times in the United States. He was head of department in the Health Ministry in 1990 and at the Ministry of Education in 1998-99. He is the author of over 80 publications.

Sándor Pintér, born on 3 July, 1948, graduated from the Police Academy in 1978 and earned a degree in law from Law Faculty of Eötvös Loránd University of Arts and Sciences (ELTE) in 1986. He first worked as a driver at the Ministry of the Interior and then became assistant detective in Budapest’s 14th district. Later he held positions at the National Police (ORFK) and the Budapest Police. He was appointed Chief of the Budapest Police and then the National Police in 1991, which position he held until his retirement at the end of 1996.

Since 1997 Pintér has been security advisor to OTP, Hungary’s largest bank by assets.

Pintér was Minister of the Interior in the Fidesz government between 1998 and 2002.

Pintér has had interests in various security firms since 2002. He has been owner and Chairman of Civil Biztonsági Szolgálat Rt. since 2003.

Hungary’s customs authority (VPOP) detained seven people after a raid on IT company Eclipse Informatikai Rendszerház Zrt.. The investigation was launched on charges of tax fraud and money laundering. Pintér’s daughter, Hajnalka Pintér, was project leader at the company. After the Eclipse case was brought to light, it became a question whether Fidesz would give Pintér a post in the new government. Another case which cast a shadow over his appointment as minister was that Péter Gergényi, former chief of the Budapest Police, found employment at a travel agency co-owned by Pintér.

Before his appointment, Pintér sold his security company Civil Biztonsági Szolgálat Zrt. to Prostasia Zrt.. Civil is now owned by Tibor Kántor, who was deputy to tax authority Chairman Lajos Simicska under the previous Fidesz government.