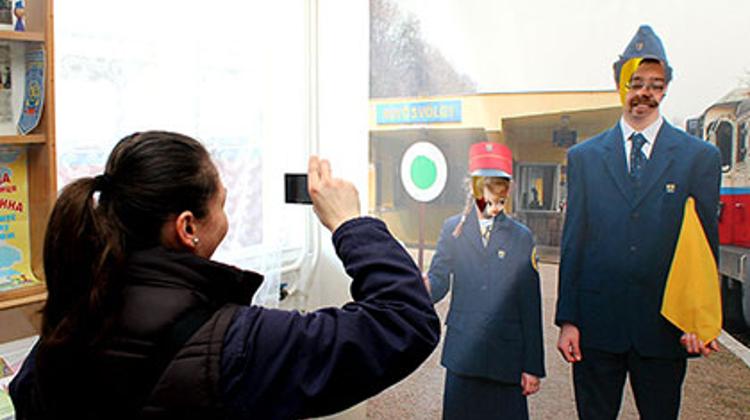 The Children's Railway Museum introduces the past and present of the former Pioneers' Railway and the Children's Railway. The story of the railway line and the children's community is shown in the forms of archive photos and documents as well as relics. Visitors can get a glimpse of the difficult job faced by the constructors, the commitment and enthusiasm of young participants throughout the decades and the technical development that has taken place.

The Children's Railway Museum, the exhibition on the past of our organisation, underwent an extensive revamping in February 2014. New content, display items and interactive toys were added to the collection.

On the top of that, the descriptions are now available in English and German as well, along the Hungarian version.

Where to find the Museum

The exhibition room presents the past of the former Pioneers' Railway and the Children's Railway. The entrance is from Platform 1 of Huvosvolgy Station.

The serious side of things

Visitors can enter the exhibition room through an arch representing the mouth of the tunnel between Hars-hegy and Huvosvolgy Stations, one of the most popular sections of the line of the Children's Railway.

Items are arranged into chronological order. Of course, most of the documents are in Hungarian but the numerous images speak for themselves. Most of the images show young participants and trains. It is interesting to see how children on duty or the rolling stock changed from decade to decade.

The story to be learnt begins with the contemplation of the institution, just two years after the end of World War II. Construction, which took a bit more than two years, the initial opening ceremony of 1948 and the one at the time of completion in 1950 follow.

The Pioneers' Railway, as it used to be called from 1948 to 1990, initially had a close association with the Pioneers' Movement. The documents and photos of the 1950's bear the signs of that era very vividly.

Also on display are numerous items from the past of the Children's Railway. Among others, old tickets, uniforms, signalling lights and discs, timetables and brochures can be seen in the showcases. Giant models of the first railcars and the first passengers' carriages are there as well. The railcars have been dismantled already but the carriages are still in operation on the line.

Two very interesting machines are exhibited, too. One is an old ticket printing machine that was never actually used at but for the purposes of the Pioneers' Railway. It belonged to the ticket printing service of the Hungarian State Railways. The other is an old telephone set of the size of a large refrigerator capable of handling only a few local battery (LB) lines. It was removed from one of the stations in the 1960's and preserved for future generations to see.

The exhibition is closed by a short summary of the foreign relations the Pioneers' Railway and the Children's Railway has ever had. There were and still are strong ties with similar institutions mainly in Germany.

There is a video corner in the exhibition room where old and current documentaries on the Pioneers' Railway and the Children's Railway are on. They are also in Hungarian but very informative even without understanding their narration.

Among the showcases of archive photos and documents, interactive toys are at the disposal of visitors.

There are two giant memory games in the exhibition room. The flipping tiles show images of the railway's rolling stock, genres from the daily lives of Children's Railway participants and the sights to see nearby.

A board with the map of the railway line offers a skills game. One can make an imaginary ride along the line from Huvosvolgy to Szechenyi-hegy by navigating a wooden ball over the track using strings only. Those who jump the rails should start all over again.

In a corner an old, MAEF3 type ticket office computer is installed. This sort of machines was used from 2003 to 2012 at Szechenyi-hegy and Huvosvolgy Stations. It is rightfully confined to the museum now with its small, monochrome monitor and noisy, matrix dot printer. Visitors can print tickets with the computer which, of course, are invalid to use.

In the opposite corner a photo screen is set up. Children or adults can stand behind it for a memorable picture to be taken. They will look like as if they put on Children's Railway uniforms.

The museum was established in 1992. Beforehand only special visitors had been given access to the collection of the historic items. Since it was opened, it has been revised, updated and extended regularly. The aim is to always cover the story of the Children's Railway from the very beginning to contemporary times.

The Children's Railway Museum is located in Huvosvolgy Station. Its entrance is from Platform 1. It is open from March to the middle of December at weekends and daily from June to August. It can be visited for a symbolic entry fee.

Visiting the museum is a unique and entertaining way of spending time before the departure of the next service from Huvosvolgy Station or after arrival at the end of the visit to the Children's Railway.

The museum admits visitors at most weekends. It is closed for a few weeks in winter.