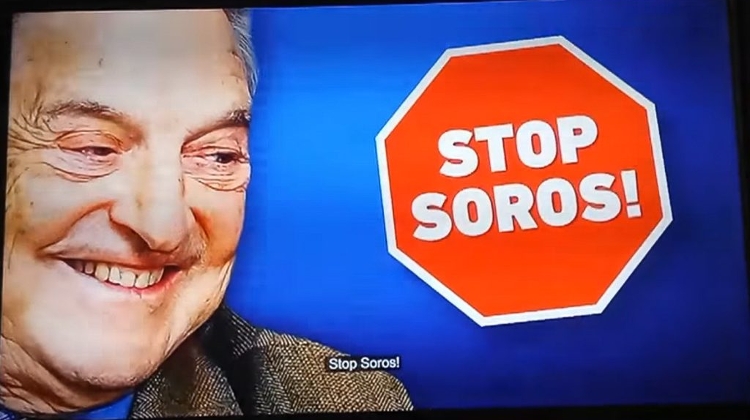 A leftist analyst writes that the government side borrowed the ‘Stop Soros’ campaign from their Macedonian allies, while pro-government commentators believe that it expresses the will of the Hungarian people.

Parliament passed the ‘Stop Soros’ bill with an overwhelming majority on Wednesday. It envisages sanctions including 18 month prison sentences for those who ‘promote illegal immigration’.

An amendment to the Fundamental Law (the Constitution) passed on the same day bans the ‘settlement of alien populations’ in Hungary. Amnesty International and other NGOs believe to be targeted by the new legislation, although they insist that they do not  promote illegal immigration, and work only with asylum seekers allowed into Hungary by the authorities.

A conference under the same title was held in Budapest last year by right-wing extremists some of whom were expelled by the Hungarian authorities, he adds.

He suggests that the anti-Soros campaign was propped up early this year for the purposes of the electoral campaign at the height of which the government side promised to pass such a law once re-elected.

In Magyar Hírlap, Pál Dippold defines the gist of the ‘Stop Soros’ legislation as a means of preventing a ‘population exchange’ of the kind which is ‘so fervently promoted in the West’.

He condemns foreign funded NGOs and opposition politicians who complain abroad ‘against their own country’ and calls them ‘professional traitors’.

On Mozgástér, Zoltán Kiszelly suggests that  Viktor Orbán is ‘giving a hand to President Trump of the US’ with his staunch opposition to mass immigration. That was one of the main themes of Mr Trump’s successful presidential campaign, he explains, and that is what he intends to build his midterm election campaign on later this year.

Mr Orbán was the first foreign leader to support Mr Trumps anti-immigration policies, the pro-government analyst writes, adding that the ‘Stop Soros’ legislation is another contribution to their common cause, although it will ‘raise a great deal of dust’ at the EU summit at the end of the month.

This opinion does not necessarily represent the views of XpatLoop.com or the publisher. Your opinions are welcome too - for editorial review before possible publication online
Click here to Share Your Story

Local Opinion: ‘Stop Soros’ Bill As An Episode In A Clash With Liberal Elites