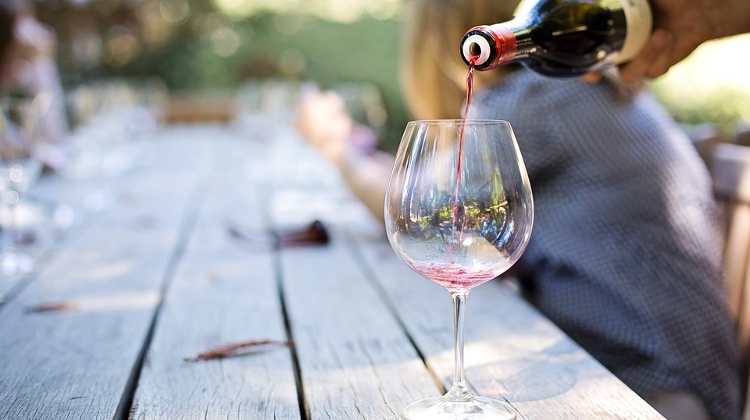 Despite some funds aimed at improved marketing, Hungarian wine exports have been pretty much stagnant for the past two decades. In 1985, exports stood at three million hectoliters – in 2016, the entire Hungarian wine production accounted for the same amount, only a fifth of which was export.

Some good news came last year, which saw this figure rise higher going, but that was largely due to poor harvests in France and Italy, László Kopacsy, head of the marketing-management faculty at Budapest Business School (BGE) says.

The main problem is that the majority of export is sold as bulk wine without designation of origin and at a very low price: around one euro per liter or less. In 2016, the average price was EUR 1.14/liter – half of that of Austrian wine exports.

Among the reasons is the lack of an organization that could help coordinate export and marketing activities, meaning most wineries have to build ties abroad themselves, Kopácsy said.

Agrármarketing Centrum is the organization responsible for the marketing activity of Hungarian wine sector. It does take wineries to international fairs, but only a handful are able to travel with them or take advantage of funds and tenders, the expert says.

Another reason is that many of the largest wineries in Hungary are owned by German companies which buy the bulk wine to improve their harvest, though there are no statistics on that, Kopácsy notes.

The solution, he believes, lies in markets such as Germany and Poland. “Hungarian wines would have a market there; we have century-long traditions with them. We would also need to build ties,” he adds.

To make that happen, wine growing regions should “get out there”, Peter McCombie, Master of Wine told the wineries of Villány at the fourth Franc&Franc conference at the end of November.

“Villány has a comfortable place within Hungary,” McCombie says. “But it doesn’t have a comfortable place beyond its borders.” Having confidence is good but there is always something one can improve, he adds. “So don’t be complacent, get out there in the market because people need to see you.”

In terms of building ties, many wineries rely on personal contacts; that is how they get to places like Taiwan, as Heumann Winery has. Exporting 70% of its production, the winery in Villány is an exception to most that export 10% or less.

Heumann’s main markets are Switzerland and the United States, but also the United Kingdom and Taiwan, “In the last 30 years, I was privately involved in wine: I was reading, tasting a lot”, says owner Erhard Heumann, who used to work in the banking sector.

“By reading you learn where the important markets are and my background in banking helped: you know how to approach them.”

Not everyone is aiming to export more. “Our main market is Hungary but I believe that is fine,” says Andrea Gere of Gere Winery. Look elsewhere in the region, and you will see that the majority of wines produced are consumed within a country, she adds. Roughly 80-85% of Gere wines are sold in Hungary, the rest goes for export.

“What we focus on is that our wines are positioned well on foreign markets and are in wine shops and restaurants where there is a chance to tell customers about them.” Being relatively little known abroad, Hungarian wines can only be sold when you can communicate with customers, have them taste it, Gere says.

Exports have received less emphasis in the past few years at Varga Winery. Tokaji and Egri  Bikavér, the two wines that sell abroad, constitutes roughly 300,000-400,000 bottles of the winery’s annual production of 15 million bottles this year.

“Due to the growing expansion of Alföldi wines on export markets, we no longer have a competitive edge abroad,” says Máté Varga. Since demand for low quality wines in Hungary is declining, wineries at Alföld sell more abroad, Varga explains.

When it comes to export, Hungarian wineries should aim for countries in the region such Poland or even Germany, where they know Hungary and its wines, Varga says.

Being the largest wine exporter in the country, hypermarket chain Lidl has had a marked effect on export figures. Nearly 15 million bottles of Hungarian wine were sold by Lidl Hungary in 2017, of which about half was for export – a 20% increase compared to the 2016 figures.

The wines most in demand were Királyleányka, Tokaji Furmint and Szürkebarát, according to data by Lidl Magyarország. The company organizes a wine expo every year where international experts can select the wines they wish to put on Lidl store shelves abroad.