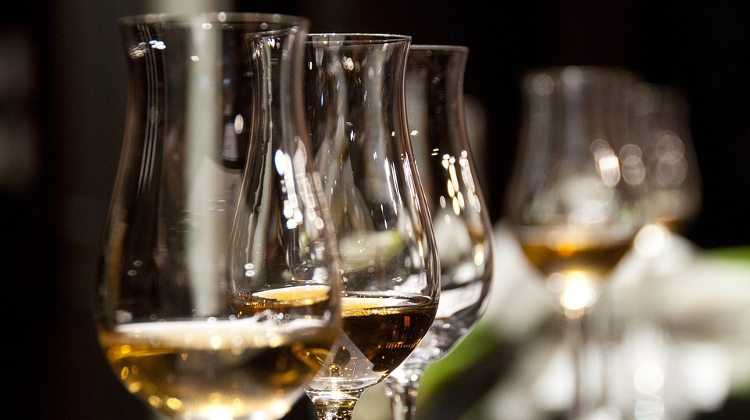 An anything but dry second half of November, both in terms of the amount of rain falling and the wine flowing, saw a flurry of events for wine lovers with lots of new wines to whet jaded palates.

Showcasing “natural wines” – one of the hottest and also most controversial topics in the world of wine – the annual “Mitiszol?” (literally “What are you drinking?”) event, went off smoothly rather than with a bang, in the suitably contemporary setting of Millenáris on November 17.

Smoothly in that these minimum-intervention wines made without the use of pesticides and herbicides and similar artificial products, with natural treatments such as copper, sulfur and orange oil used to spray the vines, have now reached a certain level of consistency on the part of Hungary’s exponents of the art, which also includes a merry band of ethnic Hungarian winemakers across the border into Slovakia.

This year, there were notably fewer unpleasant twists and turns to the flavors (across several vintages) brought about by mother nature, which is harder to defend against when you rely on natural treatments only.

Those who practice organic – or the even more hard-core biodynamic – winemaking will tell you that it can be difficult at the beginning of the transition over as the vines and vineyards have become reliant on synthetic pesticides and other treatments.

However, after a few years, the vines recover themselves and become more robust and are able to defend more for themselves, and produce better, healthier fruit – and also better wines, or so the argument goes.

The proof was in the pohár (glass) at “Mitiszol?”. Wines made with minimum intervention, fermented from indigenous yeasts are the best articulators of terroir, which is ultimately what we want to taste.

A Junibor (an association of young winemakers) tasting of new wines from the 2018 vintage, held at DiVino Gozsdu on November 23, featured wines made from grapes that had been harvested very early in this consistently very warm vintage. They were picked early in order to preserve the acidity, which can drop off quickly if the grapes are left out on the vines.

However, this was not always achieved with many of the wines; in fact, one or two were on the flabby side. Although most are in good shape now, it might be better they were drunk in the short-term rather than laid down – indeed many of the wines are made for early consumption anyway. Perhaps this is a sign of things to come, should temperatures keep rising, although it should be noted that 2017 actually saw higher temperatures reached over, while in 2018 it was hot for most of the growing cycle.

From the Kunság, Hungary’s largest wine region and part of the Great Plain, Frittmann’s Irsai Olivér 2018, harvested at the beginning of August, had fuller body than usual for the wine and retained enough acidity to carry that weight. This is a grape that’s too often upfront on the nose and pale in comparison on the palate, but this had good balance.

Jeckl Vadóc Portugieser 2018 from Villány was light-medium bodied, fresh and zesty (yes! sufficient acidity) with restrained tannins and juicy raspberry and cranberry notes. A nice example of the grape and the ideal early red. From Csopak, St. Donát’s Magma Kékfrankos 2018 is already in great shape with its aromas of potpourri and sour cherry, followed by smooth and ripe palate.

Producers from Somló, Hungary’s smallest wine region but a giant in terms of the expressive whites it produces and for its place in the upper echelons of Hungarian wine culture, came to Budapest on November 23 for a tasting of mainly the 2017 vintage at the Stefánia Palota.

A trio of ultra-talented young producers, who teamed up to form the Bazaltkör Egyesület have now released their first joint wine (first mentioned in this column in May) – Bazaltkör Juhfark 2017 – whereby Bálint Barcza (Barcza Pincészet), Péter Tóth (Kőfejtő pince) and Tamás Kis (Somlói Vándor Pince) put together their finest Juhfark musts, taken from grapes from their best plots.

The wine is a blend of three different barrels of Juhfark, one from each winemaker, with the barrels coming from the Trust Hungary cooperage and each barrel possessing different characteristics, with two coming from the Zemplén hills in northeast Hungary (one of which was steamed) and one coming from France. The wines were fermented and aged in the barrels for seven months.

“Juhfark needs the oak,” said Kis, who uses stainless steel for most other varieties. The wine is savory, long and complex with notes of ginger and eastern spices. It costs HUF 5,000 directly from the producers.

Tóth from Kőfejtő, who worked in Marlborough, New Zealand, for Yealands and in Szekszárd for Merfelsz, before settling down in Somló where he has five hectares, is making some really fine wine.

In need of a bottle of wine for the evening from the Somló event, it had to Kőfejtő’s Cuvée 2016 – 50% Olaszrizling with the other three main Somló grapes of Furmint, Hárslevelű and Juhfark contributing the rest. HUF 3,335 from Bor és Más.

István Spiegelberg also showed a stunning range of wines from across several vintages. He says that Juhfark needs just a few grams of residual sugar to soften the impact of the grape’s often searing acidity, advice given to him by Angela Muir, Master of Wine.

Down in Villány on the same day, another Master of Wine, Peter McCombie, told my colleague Zsófia Végh on the sidelines of the Cabernet Franc conference that he believes that the two worlds of the big, robust Cab Francs (on which the region’s reputation was built but is now getting tired for many) and a new, fresher, lighter style can peacefully co-exist.

He also said that a touch of leafiness or herbaciousness – suggesting less ripeness rather than a lack of ripeness – makes a good Cabernet Franc. I found this, as well as delicious red and black fruit, smooth and round tannins, body and balance in Ruppert’s 2013 Cabernet Franc (HUF 14,000 for a magnum at Bortársaság).