Updated: Curfew To Remain In Hungary Until 15 March 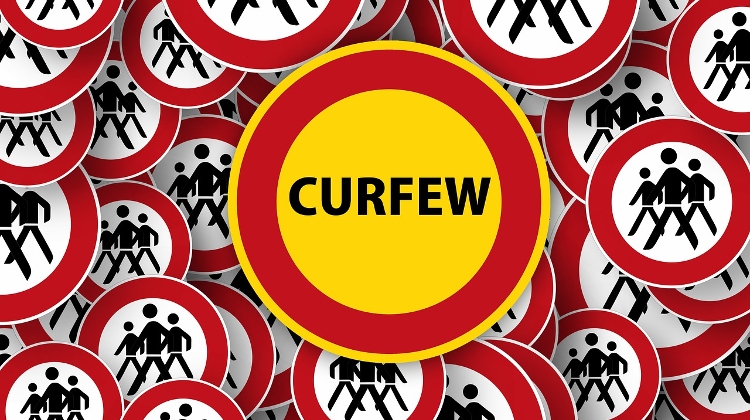 An extension of the current Covid restrictions was just announced by Gergely Gulyás, Head of the Prime Minister’s Office. Legally this will require an extension of the emergency legal order, for which Parliament's consent will be sought, he said.

The explanation behind the extension given is that at Thursday's government meeting:

The government will maintain the current restrictions introduced due to the coronavirus pandemic until March 15, the head of the Prime Minister’s Office told a weekly press briefing. Gergely Gulyás said that the third wave of the pandemic had hit Hungary and numbers could “worsen dramatically” in the coming weeks. “The next two weeks will be particularly difficult,” he added.

There are a number of new variants present in the country, spreading faster than earlier ones, Gulyás said, adding that the vaccines currently available provided protection against each of them.

The curfew situation will be re-examined at 15 March.

The lifting of restrictions imposed last November is possible if there is a significant reduction in the number of infected people, or if a sufficient number of vaccines are available.

Gulyás said that hopefully the current lockdown was the last of its kind, in view of the mass inoculation of people now under way. He said that the vaccination process would be accelerated in the next two weeks, with “more people receiving the jabs than the total number inoculated so far”.

The restrictions could be eased in a couple of weeks, he said, adding that the government would make relevant decisions in consideration of the results of a National Consultation survey on the subject. He also said that the government would define authorisations attached to the vaccination certificates issued to people inoculated and those who have recovered from Covid-19.

The minister slammed the left wing for being “anti-vaxxers”, blaming” Ferenc Gyurcsány and his party, the Democratic Coalition” in particular. He insisted that their actions were contrary to the interests of the country, accusing them of “playing with lives”. The leftist parties refused to vote for an extension of the special legal order and criticised the vaccination plan, Gulyás said, insisting that “the only reason could be that they expect a prolonged pandemic and think they would therefore have a better chance of snatching power”.

He also said leftist mayors had recently “called for a boycott of vaccines licenced in Hungary”, calling this “unacceptable”.

Concerning the inoculation of senior officials, including the prime minister, Gulyás said that while politicians had been among the first to be vaccinated in many other countries, the Hungarian government did not believe it would have been right for them “to be at the front of the line”. The government is convinced that “this is the right way to do things” even if those in charge of the epidemic response measures have an interest in being among the first to get the jab, Gulyás said.

He added that Prime Minister Viktor Orbán is expected to be vaccinated with the Sinopharm jab next week. Asked which vaccine he would prefer, Gulyás said he was “not going to be picky” and would accept whichever one he was offered. Gulyás dismissed as “untrue” Democratic Coalition MP Gergely Arató’s claim that Hungarians were not free to choose which vaccine they wanted and were “relegated to the back of the line” if they did not accept an Eastern jab.

“The vaccine is voluntary and free of charge, and everyone has a right to decide whether or not they want the vaccine that is available,” he said. “If someone doesn’t accept [the vaccine they are offered] then they will have another chance to get inoculated once their preferred vaccine is available.”

The Hungarian authorities have assessed the vaccines in use in Hungary and the state bears full responsibility for their safety and effectiveness against the coronavirus, Gulyás said.

Asked about the Health Scientific Council’s decision to reject a proposal to reopen the country, Gulyás said the government could only see as far ahead as March 15, but would like certain services to reopen after that date. The prime minister has consulted with mathematicians, virologists and professors of medicine who all agreed that Hungary’s Covid numbers were expected to deteriorate significantly over the coming weeks due to the UK variant of the virus.

Gulyás added that concerts and events with large crowds would only be permitted once herd immunity is achieved. The evening-night curfew will have to be among the first measures to be lifted, he said, arguing that it was “the main restriction disrupting people’s lives”.

Around 2.5 to 3 million vaccines will have to be administered to ensure that the most vulnerable age group is protected, he said. Gulyás said he was hopeful that 1-1.2 million elderly people would soon be vaccinated. Those who are already vaccinated or have recovered from the infection will begin receiving their immunity certificate from March 1, Gulyás said. Then the government will have to decide on the sort of exemptions, besides quarantine rules, that certificate-holders will be entitled to, he said.

Meanwhile, Gulyás ruled out the possibility of getting the vaccine for a fee at a private practice. The government has a vaccination programme in place and is handling the procurement of vaccines, he said, adding that it was certain that the National Public Health Centre (NNK) would not grant any other entity permission to administer vaccines.

The PM’s chief of staff was also asked about a recent ruling by the Constitutional Court declaring that the government has a duty to provide funding to local councils that is proportional to the tasks they have to carry out, and Budapest Mayor Gergely Karácsony’s call for local councils to be compensated in full for their lower business tax revenues.

Gulyás said the debate was not about the funding of local council responsibilities but rather about whether a part of the business tax should be left with small businesses or go to local councils. The government believes that the best way to create and save jobs is by leaving these monies with businesses, he said.

The government does not deny that local councils are in a difficult situation but is ready to talk to them and provide help wherever it can, Gulyás said.

Asked about the three-week timeframe required by the National Institute of Pharmacy and Nutrition (OGYEI) to test Russia’s Sputnik V vaccine compared with the shorter period of time in the case of the Chinese Sinopharm which arrived in Hungary only last Tuesday, but is already in circulation, Gulyás said samples of Sinopharm had been purchased earlier to make it available for testing by the National Public Health Authority (NNK).

The licencing took more than a month from the time the first sample arrived in Hungary, Gulyás said. The NNK also assesses every new vaccine shipment, he said, adding that this was a quicker procedure. OGYEI’s experts will begin testing the Russian vaccine produced in a Saint Petersburg plant on Thursday, he added.

Asked about the possibility of producing the Russian vaccine in Hungary, Gulyás said that due to a lack of sufficient capacity, the local company, Fluart Kft, cannot be involved in such a project. He noted the government’s recent decision, however, to give preferential investment status to a national vaccine plant to be set up in Debrecen, in eastern Hungary.

As regards Sinopharm, China delivered 50,000 more doses in February than the expected 500,000, Gulyás said. Two additional shipments of 500,000 doses are expected in March and April, respectively, and a third one of 3.5 million in May, he added.

Recipe For A Covid Vaccination In Hungary: A Dash Of Luck & A Splash Of Cunning