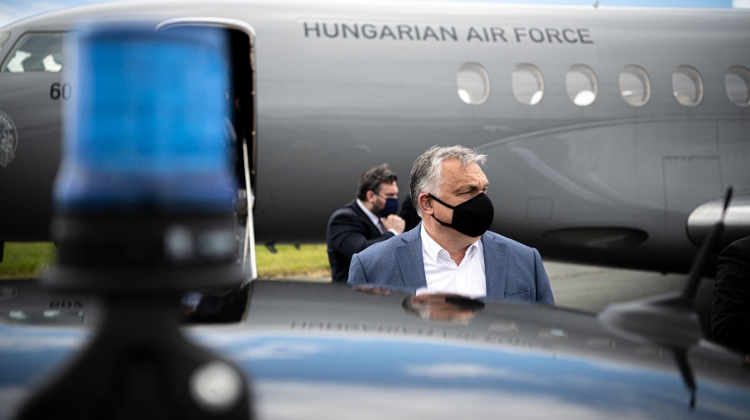 The price of climate protection should be paid by large polluters rather than Hungarian families, Prime Minister Viktor Orbán said on Tuesday.

Speaking after a two-day European Union summit in Brussels, Orbán said in a video posted on Facebook that the meeting focused on vaccination, migration and climate change.

As regards vaccination, Orbán said that Hungary was “months ahead” of other EU member states in terms of its inoculation rate.

Migration to Europe was discussed at the initiative of Spain and Italy, since “thousands of illegal migrants are making their way to the Europe on a daily basis”, Orbán said.

“The issue will be discussed in depth and in hope of a decision next month,” Orbán said, adding that Hungary continued to reject illegal migrants.

Regarding the issue of climate change and “who should pay the price of climate protection”, Orbán said some would have the people pay in the form of taxes on fuel and housing.

Others, including central European countries, say the price should be paid by large polluters such as corporations. “This discussion will be resumed next month,” he said.

Palkovics the minister of innovation and technology said:

The Hungarian government believes that the costs of the fight against climate change should be borne by the world’s biggest polluting companies rather than by households, László Palkovics, the minister of innovation and technology, said in Brussels on Tuesday.

Speaking to Hungarian reporters, Palkovics said Hungary opposed the idea of adding apartment buildings to the European Union’s emissions trading scheme, arguing that doing so could cost an average Hungarian family up to 300,000 forints (EUR 862) a year.

Palkovics called Hungary a “climate champion”, noting that it had managed to reduce its CO2 emissions by 33% against 1990 levels by as early as 2018.

Hungary is also committed to reducing its emissions by 55% by 2030 and to being carbon-free by 2050, he added.

Earlier:
The costs of the fight against climate change should be borne by the world’s biggest polluting companies, Prime Minister Viktor Orbán said in Brussels on Monday ahead of a two-day summit of European Union leaders.

Hungary does not accept the position that individuals and families should bear the costs of climate action, the prime minister said in a video posted on Facebook.

Orbán added that in such a case the fight against climate change could cost an average Hungarian family up to 20,000 forints (EUR 57) a month.

“We cannot accept this,” Orbán said. “We support the solution that would have polluters bear the costs of climate protection.”

“We’re at the beginning of the battle,” he said, adding that he hoped Hungary would be successful in enforcing its interests.

The prime minister noted that the main topics to be covered at the summit include the pandemic, migration and environmental and climate protection.

When it comes to the pandemic, “Hungary is usually being congratulated”, he said, noting that the country had one of the highest vaccination rates in the bloc.

Orbán is being accompanied to Brussels by Innovation and Technology Minister László Palkovics.

Marking the Day of Hungarian Nature on Saturday, the parliamentary group leader of the junior ruling Christian Democrats stressed the importance of paying mindful heed to the environment and teaching children to do the same.

“The resources of the world around us — drinking water, farmland, raw materials — so often are taken for granted,” István Simicskó said. “Our children can only enjoy these priceless treasures in the future if we treat nature as good custodians.”

“We must behave as human beings, not as consumers,” he added in a statement.

Meanwhile, on the occasion of International Day for Biological Diversity, Máté Kanász-Nagy, co-leader of green opposition LMP party, said the creation of a liveable environment and the preservation of wildlife were equal to the very future of civilisation.

At a press conference broadcast on Facebook, Kanász-Nagy said the cause of the extinction of species was the overuse of nature, deforestation for economic purposes, and environmental pollution.

He pledged that LMP, as part of new government after the 2022 general election, would put a halt to construction projects that threaten wildlife habitats and the destruction of green spaces and waterfronts.

The Ministry of Agriculture said in a statement on International Day for Biological Diversity that Hungary’s natural environment and biodiversity were “outstanding” in European comparison.

“Protecting the diversity of wildlife is a joint undertaking and responsibility,” the statement said, adding that Hungary’s new national biodiversity strategy for the next decade is in the course of being drafted.

The ministry said it was “committed to conserving biodiversity” and active protection measures have resulted the rebuilding of more than 100,000 hectares of wildlife habitat in recent years, helping to protect a number of endangered species.