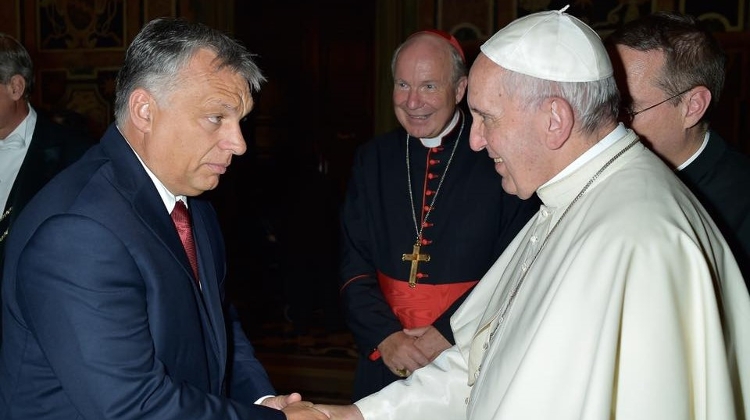 Pope Francis does not plan on meeting Hungarian Prime Minister Viktor Orbán and President János Áder during his planned visit to Hungary in September, according to sources quoted by the National Catholic Register (NCR).

“A gigantic slap in the face”

Scheduled to visit Hungary to celebrate the closing Mass of the International Eucharistic Congress on September 12, the pontiff’s planned trip “is threatening to cause a diplomatic rift after it has emerged the Holy Father may only stay three hours in the country, omit a courtesy visit to Hungary’s president, and then spend a possible three and a half days in neighbouring Slovakia,” the US-based ecclesiastic daily writes.

According to the current itinerary, Pope Francis would travel directly from the airport in Budapest to Heroes’ Square, where the mass is scheduled to be held, and immediately leave to Bratislava afterwards.

According to the National Catholic Register, diplomatic efforts were now underway to try to convince the pope to prolong his stay and meet with Hungary’s political leaders, including President Janos Ader and Prime Minister Viktor Orbán.

Sources have described the decision as “an affront to Hungarians and ‘a gigantic slap in the face’ of Prime Minister Orbán,” who has gone to notoriously great lengths to present himself as the defender of Christian identity and values in Europe.

Diplomatic confusion ahead of Pope’s visit to Hungary

“It would be outrageous,” a Church source in Budapest was quoted as saying.

“It would be the equivalent of him spending half a day in Israel and then three and a half days in Iran, or half a day in Poland and then traveling to Russia for a few days. Everyone thinks it is unacceptable.”

Government and religious representatives flew from Budapest to Rome last week to coordinate diplomatic efforts to change the schedule.

Pope Francis has for years been at odds with Hungary’s top bishops, and expressed his opposition to the restrictive immigration policy implemented by Viktor Orbán’s government.

In his third encyclical published in October, the Pope warned of “instances of a myopic, extremist, resentful and aggressive nationalism” in a statement commentators saw as veiled criticism against nationalist leaders such as former U.S. President Donald Trump and PM Orbán.

In 2016, a founding member of Orbán’s Fidesz party Zsolt Bayer had accused Pope Francis of being “either a senile old fool or a scoundrel” due to his views on immigration and asylum.

Sources familiar with the case add that the pope’s planned visit in September was at risk of being instrumentalised by Hungarian authorities only months before key elections.

Known for his intensive travel schedule, Pope Francis has already made brief one-day visits to countries without addressing or meeting with political representatives.

Nevertheless, “for a pope to visit a capital city and not meet the country’s leaders is […] unprecedented,” highlights the NCR.

Viktor Orbán and Pope Francis previously met in 2016 on the sidelines of the annual conference of the International Catholic Legislators Network.

The last official papal visit to Hungary dates back to 1996.

During the second leg of his planned Central European tour, the pontiff will travel to neighbouring Slovakia, where he is likely to meet with President Zuzana Caputova – whom he hosted during a private audience in the Vatican last December.

Main photo credit: Office of the Prime Minister of Hungary