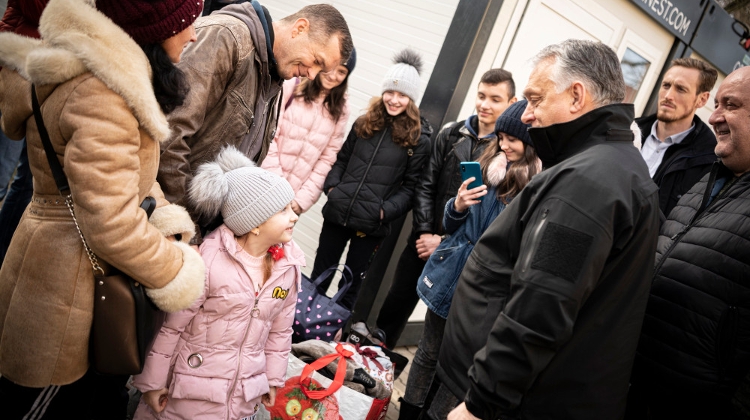 Hungary wants peace, Prime Minister Viktor Orbán said in an interview published in the weekly Mandiner. In the interview given earlier this week, he said Russia was “rearranging the European security map”.

Russia “feels safe” only with a buffer zone around the country, and is attempting to “turn Ukraine into a neutral zone by military action, after diplomatic attempts have failed to do so,” he said.

“Hungary has made it clear that it does not accept war as a means to any end, and condemns all who choose that path,” Orbán said.

Russia’s demands have since remained unchanged, and “since the military advantage is on their side, it was only a matter of time before the talks started”, he said. Hungary has a vested interest in a speedy agreement and the restoration of peace to the region, Orbán said.

“We condemn Russia for launching a war on Ukraine. We think the parties should restart talks as soon as possible, and have offered to host the talks. But what really matters is that they start talking. All Europe should work on achieving peace,” he said.

Until recent times, Hungary had “balanced and fair relations” with Russia, Orbán said. Russian President Vladimir Putin “always honoured our agreements, and Hungary did the same,” he said. Hungary will have to redefine its goals and interests in view of the new state of affairs, he said.

The Hungarian government has not vetoed EU sanctions against Russia, and sees EU unity as of paramount importance in the present situation, he said. “Regarding bilateral ties after the war, Russia will definitely still exist afterwards,” he said.

“There is no reason whatsoever for us to sever energy cooperation with Russia. EU leaders said themselves that the sanctions will not harm the delivery of energy resources from Russia because that would ruin the European economy,” he said.

Should the upgrade of the Paks nuclear plant fall victim to the sanctions, Hungary would be forced to buy even more gas from Russia at higher prices, he said. “I do not support that step, because Hungarians should not have to pay the price of war,” he said. Orbán said that in times of war, “strategic calmness… speaking less but succinctly, responsibly,” was of the essence.

At times like these, “we cannot allow for campaign interests to take over,” he said. “The opposition wants to send weapons and soldiers to shoot at and fight against the Russians. This proves they have no routine, no knowledge and no sense of responsibility. We need responsible politics, security and stability, rather than adventurers,” he said.

Orbán offered Hungary’s help in the talks with Russia. Hungary is ready to host the talks, and continues to provide aid to Ukraine, fuel, food and other basic goods, he said. “We also accept everyone coming from Ukraine,” he said.

Regarding the world economy, Orbán said China was likely to become the strongest economic and military power in the near future. Hungary, with its population of 10 million, must “manoeuvre cleverly”, he said, adding that “we are in an alliance with the West but would also like to develop beneficial relations with the rising great power”.

Commenting on the new German government, he said that after reading their programme, he found there were “many question marks”. He said the programme “announced that Germany would become an immigrant country, denied that society is divided exclusively into men and women, they plan to legalise soft drugs, empty the notion of the nation and they want a federal Europe,” he added.

“We would like to sign a tolerance agreement with them in order to ensure that we could go our own way in these matters,” he added.

All Ukraine Refugees Taken Care Of

All refugees from Ukraine in Hungary are being taken care of, the prime minister said in Beregsurány, at the Hungary-Ukraine border.

Viktor Orbán told the press that “in times of trouble, calmness, levelheadedness, experience and routine are of paramount importance”.

“[W]e have crisis-tolerant ministers,” Orbán said, adding that most had already handled some kind of crisis, so coordination was working well.

He said the work of volunteers was well-coordinated and no donation would go to waste, with handouts distributed and forwarded to the intended recipients.

Refugees without acquaintances in Hungary to accommodate them are being placed in temporary shelters, he said. Centres have been set up around Hungary where they will receive food and shelter, even if they must stay for a lengthy period, he added.

Orbán said preparations have started to organise work for refugees.

“We will try to offer an opportunity for everyone to create their own livelihood,” he said, adding that “this is a work-based country, and here we help everyone get work.”