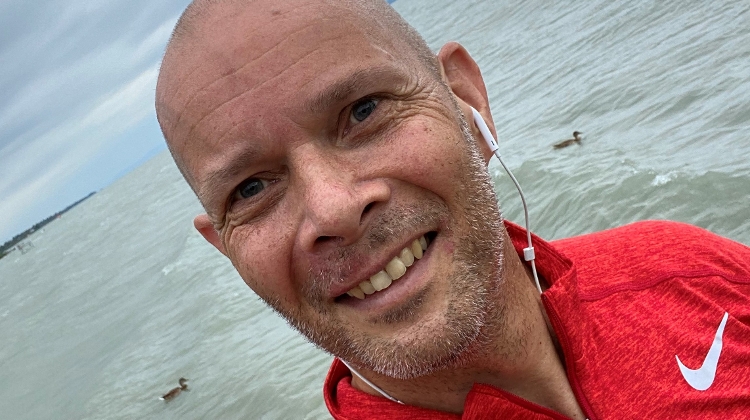 1. What’s been happening at work and at home since your most recent Xpat Interview?

I am doing a different job now.  I now lead Supply Chain and Space Range and Display Director for Central Europe. This means I look after the teams who order stock from our partners to distribution centres and onward to stores, balancing cash and availability for customers. I am also responsible on deciding the way we display these products in stores, and the teams that plan all the changes to our propositions.

On a personal level, I was diagnosed with Hashimoto's. It is an autoimmune disease, which is less commonly found in men, it is mainly diagnosed in women. Effectively your body is attacking itself, and treatment is largely focussed on stress management, a clean diet and fitness.

So, I try do exercise five times per week if I can in Siófok, where we live and where I commute from, or in Flex Gym in Budapest (when its open) early morning before work. Siofok it is a great place to go for a run, there is nobody there just you and the ducks and swans this time of the year, and the lake is beautiful.

2. What are some of your biggest challenges these days?

Workwise the biggest challenge is the fact that we are have been at the mercy of whatever actions each government decides across the four countries I look after to do with the COVID response.

Something as simple as closing the stores at 7pm, the impact is quite significant, or the elderly shopping hours, it changes the sales dynamic in the stores, so we have to adjust how we set up our systems.

These regulations and the customer response to them are similar but also different in Czech Republic, Slovakia, Poland and Hungary, it has been quite difficult for retailers to manage. With the second wave we have the learnings from March to May which was truly challenging, it is a bit complex, but easier the second time round.

3. What advice would you give to a new expat in Budapest?

Make an effort to learn the language. I do think it is a fundamental mistake. I am not an expat anymore. I have been living here in Hungary for 24 years now, and am an employee of Tesco Hungary for 14 years now.

I think language is key and also to have the empathy for people, if you are a Brit and you come from an Island nation, it has a particular mentality that does not always translate outside of the UK.

4. Who inspires your life the most?

It might be too political, but like many others I have been desperately disappointed about what went on in America in the last four years, and equally impressed by some of the politicians who stood up against that and reminded everybody what is important for the majority of people. I genuinely think that has been quite inspiring and compassionate to watch in the last twelve months.

The world became quite selfish I think and this was a good example of it, as was the unselfishness in their challenge in response.
I also think there are a number of governments around the world trying to give a compassionate response to Covid, and there are those not being that empathetic, it is clearly showing in the results. So, compassion and empathy are inspiring.

5. If you could change one thing about Hungary, what would it be?

Can they make pálinka drinkable?

6. What was the luckiest moment in your life so far?

I was very lucky to be selected to come here because I was in it together with other 200 people interviewed for the job; I first did in 1996.

My life would have never been the same as it is today if I did not come here.  I have seen 70 countries in the twenty-four years, and I am not sure with an Island nation mentality I would have never done if I hadn't moved outside the UK. It changed my perspective on the world.

7. What's your favourite place in Hungary, and why?

I am a real fan of castles and there are some stunning examples in Hungary. Cseszneki near Zirc is wonderful, Szigliget is unmissable, but there are others I have never been to yet like the one at Boldogkő. A number of them are in the East of the country and they are really wonderful.

8. Best restaurant / bar / music venue in Budapest from your experience?

As a restaurant, the one near Basilica, Café Kör.  There is an exceptionally good restaurant in Siófok, on par with those in Budapest an Asian Hungarian fusion restaurant, called Mala Garden, it is open all year and now also has a hotel built around it.

9. What is / would be your favourite karaoke song?
StrayCats would be very good - but I guess it wouldn't be on a karaoke list, so anything by Queen would be good, everyone can sing their songs. Especially after palinka.

10. What is your biggest personal / professional achievement since moving to Hungary?
On a professional level, opening the Tesco store in Budaörs, it was the biggest store in Tesco history, it has never been surpassed. To manage that store was a privilege, really.

And to hold a normal conversation in Hungarian is something I am proud of, one that a Hungarian understands. You can have many conversations...but its better if they do understand you.