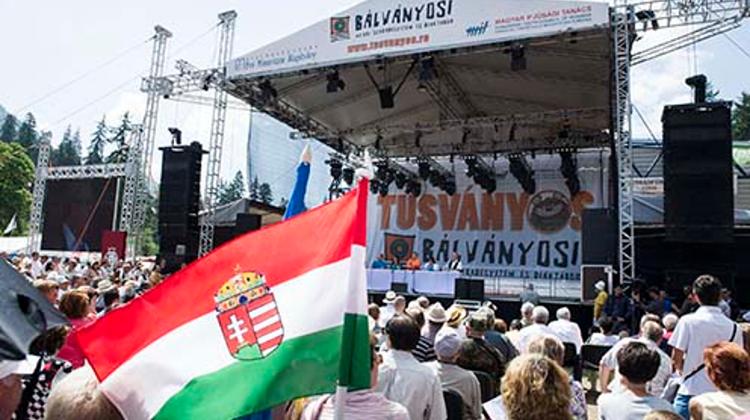 The nation cannot be strong without a strong mother country, Prime Minister Viktor Orbán said in a lecture at the 24th Balvanyos Hungarian Summer University in Baile Tusnad (Tusnádfürdő), Romania, on Saturday.

Speaking about Hungarian communities, the Prime Minister said that "in the current state of affairs" cohesion between them "cannot be promoted on a territorial basis but through bonds of citizenship".

He insisted that a crucial component of the government's economic strategy was a policy seeking to help ethnic kin retain their Hungarian identity, prosper in their homelands, and have access to Hungarian education.

In line with Hungary's economic policy the government is committed to retaining all the assets produced by the Hungarian people and prevent them from being repatriated from the country, he said on another subject.

During the past two decades Hungary stayed a "vulnerable and exploited" country despite its political freedom, he said, and argued that funds were "pumped" out of the country through several channels. As examples, the prime minister mentioned the profit of foreign banks, the central bank's base rate "kept artificially high" or foreign currency-denominated loans.

The Prime Minister said he had instructed the Minister of National Economy to pay off the loan Hungary had taken from the International Monetary Fund in 2008, before the end of the summer. He said that the necessary funds were available because "the Hungarians have generated that money during the past three years".

Concerning the European Union, Prime Minister Orbán said that its institutions were unable to meet the challenges facing the community, and voiced his conviction that answers to those problems should be found "exclusively on a national basis".

He also said that his government focussed on making up for what Hungary's previous, "non-national" governments had "neglected or destroyed" in terms of Hungarian institutions in neighbouring countries. Further developing those institutions is a next step, he added.

Answering questions after his lecture, he said that reducing Hungary's debt was in the interest of the whole nation. He said that a country could hardly recover on its own if its debt ratio exceeded 90 percent of GDP, but added that with a ratio of 77 percent Hungary was "in the critical zone". He suggested that in an ideal scenario the debt rate should be reduced below 50 percent.

On ties between Hungary and Slovakia, the Hungarian Prime Minister said that joint economic projects, new border crossings and bridges were needed to build mutual trust. He added that issues around dual citizenship were not on the government's agenda before next year's elections.