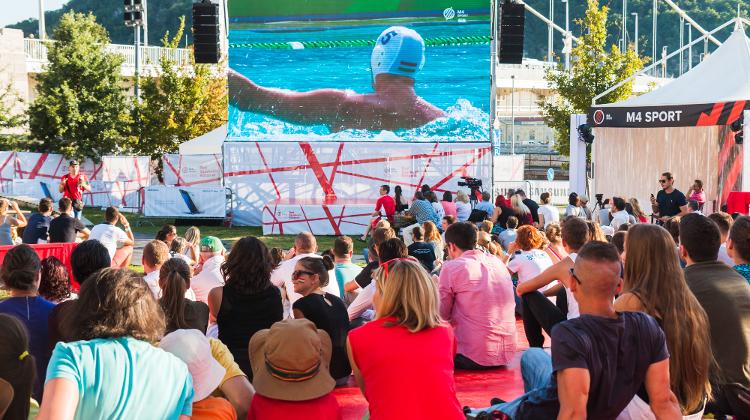 March 15 square hosts Hungary's biggest Fan Centre, where supporters get the chance to watch the 31st Olympic Games on a 35-square-meter screen. Entry is free of charge and it's open from 3 to 11pm on weekdays, and from 10am during weekends during the Olympics, with uninterrupted sports broadcasts (in Hungarian) and various 'fun activities' at one of the city's best locations near the Danube.

Vodafone Hungary, as a dedicated supporter of Hungary's water polo, is happy to back the Fan Centre, said György Beck, chairman of Vodafone Hungary. Two years ago, at the time of the water polo European Championship in Budapest, thousands cheered for the team in and around the Vodafone Water Polo Arena at the same location, and in the past weeks, at the time of Euro 2016, masses got a taste of supporting and celebrating international success together.

The enormous LED wall in the Fan Centre, open between August 6 and 20, doubles as a vantage point and can be watched from the square, so not only the Centre fits to accommodate 600 people at once, but those nearby will also be able to see how events unfold.

The nearly 700-square-meter site will be open, easy to navigate and accessible to those with disabilities. It will be dominated by the 35-square-meter display and those in the Fan Centre can root for their team in comfort. As a novelty, the screen is not only for watching the show, but it can also be scaled to reach the special lookout point at the top, which provides a completely unique view of Budapest.

“Since its founding the mission of M4 sports has been to deliver sport experience to the people. In a single year, M4 has proven that it connects and unites Hungarians. Whether it is a national championship, Formula 1, the European Championship, or currently the Olympics M4 is connecting the Hungarian fans, said Miklós Vaszily.

Visitors will get a chance to watch replays of the previous day's events from opening until the live broadcast starts, along with games and programs for the family during the weekends. Afternoons and evenings will be focused on the live broadcasts with the involvement of former Olympic athletes and sports experts. M4 Sport's ongoing broadcast will go to the Fan Centre live several times during the day.

“Samsung Electronics, as an official partner of the Olympic Games, is once more committed to giving the athletes and the supporters innovative solutions to communicate across borders. We want to give Hungarian supporters the chance to get a direct experience of the atmosphere and mentality of the event, so visitors in the Fan Centre will have the chance to test Samsung's latest mobile products that the athletes used in their preparation for the Olympics,” said Orsolya Nyilas, head of communications for Samsung Electronics Magyar Zrt.

Deputy mayor Alexandra Szalay-Bobrovniczky stated that Budapest prioritizes supporting venues and events that give families the chance to spend quality time together. The Fan Centre does exactly that, and besides being fun, it also gives children appreciation for sports through the experience of cheering together, which is why Budapest's government joined as a supporting partner.

For the duration of the Fan Centre there will be many additional events to support the broadcasts, and there will also be a drive to collect new or used, but still functional sporting equipment. These will go to the mostly disadvantageous children studying in the 25 schools that are members of the Vodafone Digital School Program.

Entry to the Fan Center is free!